The Queen's Speech was full of misleading statements and empty promises on the NHS. But Jonathan Ashworth's amendment is a bold move to counter it and is welcomed by Keep Our NHS Public.

The amendment is as follows:

If successful, this amendment points the way to protecting the NHS from further privatisation and exposure to future trade deals after Brexit. The amendment highlights the need to repeal the widely condemned Health and Social Care Act. This will require new legislation for the restoration of a publicly run and provided NHS under the responsibility once again of the Secretary of State for Health and Social Care, back in line with the rest of the UK.

This amendment to the Queen's speech has major implications for the future of the health service and will draw a clear dividing line between those MPs who support NHS privatisation and those who don’t.

We warmly welcome this amendment and fully support its demand that the Government commits to a publicly administered NHS and an end to privatisation of the service.

On Monday we called a protest; 'Johnson, Trump: Hands off our NHS' - Sadly the event was cancelled

Here you can read the Commons exchange with respect to the postponement of the Health Debate between, Jon Ashworth and John Bercow

Apologies for any inconvenience caused. This obviously remains an issue we are campaigning on, and we will keep you posted on further developments and events.

The amendment has been renamed a 'motion of regret' and is planned for debate this afternoon, Wednesday 23 October. We will of course keep all interested campaigners updated as soon as we know more.

Here's what we say about the Queen's Speech on the NHS and the 'motion of regret.' 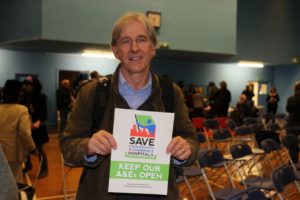 Despite recent misleading claims to be ‘the party of the NHS’, the Conservative record in government highlights their consistent undermining of the NHS. The proposals on Health in the Queen’s speech are nothing more than electioneering.

Promises of more NHS funding by 2023/24 fail to compensate for the accumulated funding deficit of the last 10 years of over £30bn per year.

The Government wrongly claims to be reining in the mayhem under Section 75 of the Health and Social Care Act where tens of thousands of typically relatively small contracts go to private providers (43% of total contract value 2016/17). In fact, the proposals aim to give NHSE more freedom to give fewer but high value contracts.

Already under this government, current spending on NHS services contracted to the private sector has risen to 18% of the annual budget, up 23% over the last 5 years (see LSE blog). Their proposals mean the privatisation trend is likely to further increase. 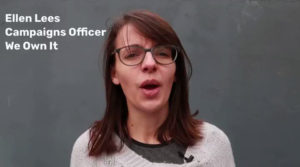 Ellen Lees from campaign group We Own It says:

Boris Johnson is failing to protect our NHS from trade deals including with Donald Trump. That makes this amendment absolutely vital.

Competition and privatisation are already running rampant in our NHS. Our health service is therefore automatically up for grabs in a trade deal, no matter what Trump and Johnson say is 'on the table'.

MPs now have a chance to pick a side. They can stand with the 84% of the public who support a publicly owned NHS. Or they can open up our NHS to Donald Trump's private healthcare lobby.

NHS England’s and this government’s policy is to actively pursue the contracting out of much larger chunks of the NHS to the private sector – be it specialised cancer imaging in Oxfordshire or the huge pathology contracts in SE London and Kent. There is no likelihood that the damaging impact of competition and markets in healthcare is being ‘reined in’. 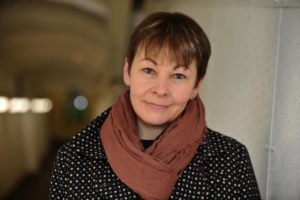 Our NHS is a public service that should be run and owned for the public good – not open to exploitation for profit. The Green Party will continue to resist it being used as a bargaining chip in any US-UK or other trade talks as Brexit unfolds.  The NHS is at its best when it cooperates and I look forward to co-operating with other MPs cross party to protect the values on which our much loved NHS were founded – and to oppose Donald Trump or any corporation getting their grubby hands on our public services. 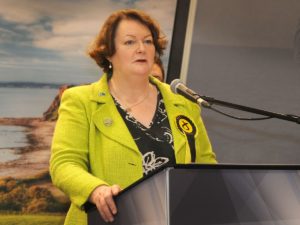 I started following the saga of the Tory/LibDem proposals, for the Health & Social Care Act, in 2011 and couldn’t believe anyone seriously thought turning the NHS in England into a healthcare market would be beneficial in any way - either for patients or staff. I and my SNP colleagues supported the NHS Reinstatement Bill, before we were excluded from voting on your NHS by EVEL, and we will continue to support you in your fight to reclaim your NHS! 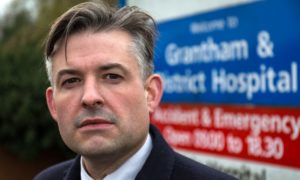 Jonathan Ashworth released the following statement to accompany the amendment,

The Tories have starved the NHS for a decade. They're why our incredible healthcare staff are stretched to breaking point day after day. Now the Tories want to use the NHS as a bargaining chip in a Donald Trump trade deal.nWe can't trust the Tories with our public services, let alone our economy.

I need your help. There are a million reasons to vote Labour in the coming General Election, but for me, saving the NHS is top.

Next week, I'm going to table an amendment to the Queen's Speech to protect the NHS from the Tories. We can't sit back and let them smile through their teeth while our national wellbeing is sold off behind closed doors. Labour will end privatisation, we will give the NHS the funding it needs to thrive, and we will invest in a National Care Service. Together we can save the NHS – with a Labour government.

I'll do my bit in Parliament, but a General Election is coming and we need to be campaigning like it.

This government that has slashed funding for the NHS, decimated its services and put its staff under incredible strain. Next week, make sure your MP votes with Labour to protect our NHS from privatisation in any trade deal, including one with Trump.

It's people like you and I who care about our NHS, who know how valuable it is for those in need, and who see through the Tory bluster to what's really going on.

Meanwhile, our joint campaign with We Own It and other great allies continues including:

‘Keep our NHS out of US trade deals’
Read the updates from Dr Sonia Adesara, KONP and watch her videos.

‘Hands off our NHS’
Already over 25,000 letters have gone to our 650 MPs calling on them. See linked campaign jointly launched by KONP and We Own It and supported by Health Campaigns Together, Change.org, Global Justice Now, Trade Justice Movement, ourNHS/OpenDemocracy and several other health and related campaigns.

Become part of this movement, JOIN KONP. We can put you in touch with the nearest local group.

Let us know how you could contribute in any way, small or large!