Two years after the first all out doctors’ strike in British history the effects of this government-imposed contract have been published. The first figures since then, revealed by the Health Service Journal earlier this week, show the results of this unpopular and unsafe contract upon the NHS workforce. Striking Junior Doctors who opposed it say, ‘we were right’.

Data shows that around 36,000 junior doctors in England have worked beyond their contracted hours more than 63,000 times since 2015. Approximately the same number of doctors have also filed exception reports to draw attention to unsafe staffing. The ability to complete and file these reports is a power clinicians were afforded after the dispute, presumably in order to try and mitigate the fallout. 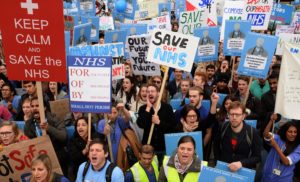 Why did doctors walk out?

In September 2016 junior doctors stood up to say no to a contract that demanded they stretch a 5-day service into 7 with no extra capacity. The strikes, (part of a contract dispute which began in 2013), were a watershed moment. The strikes highlighted the distinction between the government’s attitude towards the NHS and the reality for those on the front line, (both staff and patients alike).

Over 20,000 doctors on almost 150 picket lines across the country participated in industrial action to warn against the imposition of increasingly unsafe working practices. Sadly, their pleas and efforts to ensure patient safety fell on deaf ears and after a valiant collective effort the contract was nevertheless imposed.

I was a junior doctor when Jeremy Hunt imposed this contract on us in 2016 and I am still a junior doctor now. I fought against it. I stood outside my hospital in the cold and rain to fight for high quality care for my patients. And I am now seeing the disastrous effects of this imposition 2 years on. We said there weren’t enough doctors to look after patients for longer hours. We were right. We said trying to make us do even more with even less of us would be dangerous. We were right. We said that it would lead to patients lives being put at risk. We were right.

The treatment we doctors and also my nursing and other NHS colleagues have received at the hands of this government is unforgivable. But most of all it is unforgivable how patients have been treated. This Govt have made political choices that have costs lives.

The resulting process of the ability to submit exception reports is at least a way to highlight potentially dangerous working conditions. Worryingly though, some senior members of staff discourage submitting them as it can make the department appear inefficient. There are significant and concerning consequences of an underfunded and understaffed system (100,000 NHS vacancies including 11,000 doctors), and simply fining hospital trusts for the effect of a lack of staff is tantamount to shifting the deckchairs about on the Titanic. Circumstances will not improve unless there is a mass successful implementation of staffing across the board.

Trusts are supposed to offer time off in lieu or additional financial incentives for extra hours worked and ultimately to address the issues leading to repetitive overtime. Since 2016 there is now a specific position assigned to deal with this problem, (which in itself is a clear sign of the times). A ‘Guardian of Safe Working’ at each trust decides if trainees are working unreasonably long hours. 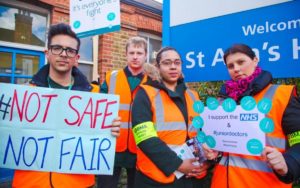 There is of course greater potential for error in a system with no slack; in a service that is chronically understaffed and underfunded, where rota gaps are the norm and ‘corridor nurses’ are an established position. Successive governments have, by running the NHS into the ground, also created a culture of fear amongst clinicians.

They are contractually obliged to keep quiet. This ever-present fear should in no way be viewed as an accidental by-product, but as a deliberate method of control. Whistle-blowers like Dr Chris Day are treated appallingly and are shown up as an example of what will happen should workers dare to publicly express an opinion.

Not only are those who highlight legitimate safety concerns treated unfavourably, they are attacked. NHS England recently spent £700,000 of taxpayer’s money on trying to silence Dr Chris Day when he took them to court over inadequate staffing at his hospital that was creating an unsafe working environment. This government body therefore was actively working against improving patient and staff safety. There are serious and sinister undertones here that should not be disregarded.

Everyone is working with rota gaps so therefore doctors have to works longer hours to ensure patient safety is maintained. Doctors are doing this on a regular basis. Management have already tried to make ‘Exception Reporting’ difficult to do as they say our consultant has to sign it off, this makes it very difficult for trainees to do. If there wasn’t so much fear I think the numbers would be even higher than this in my opinion.

Staff are leaned on

The intelligence and measured approach of doctors is respected in so many areas but totally disregarded by the government when it inconveniently conflicts with their damaging agenda. It speaks volumes that a body of people who usually keep their collective heads down feel that in 2016 they had no choice but to strike.

Day in, day out the staff in our NHS go above and beyond to provide the best service to their patients. Day in and day out they are being asked to do more with less. The latest NHS staff survey available (from 2017) shows that around three quarters of staff (71.7%) are still working additional hours, with 58.3% working unpaid overtime. Unsurprisingly in light of the staffing crisis, there has been little improvement in this area. Figures from 2016 show the equivalent figure was 59.1%. The NHS is unfortunately now in the situation of relying on the goodwill of its staff to keep it afloat, and this shows no sign of abating any time soon.

There’s no doubt in healthcare professionals’ minds – the NHS is being stretched to the limit. Exhaustingly long days where you’re discouraged to exception report leave doctors’ physical and mental health in jeopardy. Not only are patients waiting hours in A&E because the system is so overwhelmed, they’re waiting days for scans and weeks for nursing home placements or rehabilitation beds. Messages from NHS managers become focussed on patient flow rather than patient safety and the pressure is felt at all levels. I think it is a scary time to be a junior doctor or indeed, a patient. 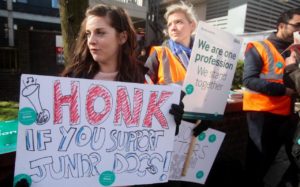 What of the government’s much promoted long-term plan? Will this be the answer to the NHS’s prayers? Sadly not. Regardless of how one chooses to spin the figures, it does nothing to address the workforce recruitment and retention crisis which is a key challenge of delivering safe and sustainable healthcare.

Chris Hopson, the chief executive of NHS Providers, which represents hospital trusts, has warned ministers that the NHS long-term plan cannot be delivered without a huge increase in staff.

I think I can make a relatively confident prediction…that everything in this plan is not going to be delivered, there is simply too much to do for the money and workforce we have available.

What effect does this have on morale?

Mental ill health is exacerbated by the presence of a restrained ethos in the NHS. There is already a toxic culture ofkeep calm and carry on, amongst doctors, which leaves them isolated and has sometimes, had tragic consequences. Doctors are around twice as likely as the general population to take their own lives which is testament to the way they are treated by the establishment and the fact that little has been done to tackle the historic culture of just ‘getting on with it.’

In Wales a government run organisation exists to support doctors suffering from mental ill health but in reality, clinicians are often too worried about confidentiality being breached to utilise it. In England the only truly anonymous support for doctors run by the government is still not available outside of London. The lack of decent, available and trusted support is shocking, especially given the working environment NHS staff are expected to endure daily.

Adding to this philosophy with an NHS staffing crisis whilst simultaneously being ignored merely compounds matters and serves to create further resentment and dissatisfaction amongst the workforce. It is a dereliction of duty by this government to not care for its carers, but instead to ignore their legitimate concerns and pleas, attack them when they voice their fears, and in doing so to turn their backs on the very people our society relies on the most.