We’ve given this campaign everything we have. But the struggle to save our NHS must grow if the NHS is to last another term of the Conservatives in office.

The Conservatives have won the election.  And there’s no questioning that this is devastating news for the NHS. We fought a hard fight for the NHS and those who rely on it, but Conservative lies and media spin, backed by right-wing billionaire media moguls swayed the electorate. Though the NHS was the biggest issue for so many people, in the end the vote was on Brexit - not austerity and public services. But our message also reached a huge number of people, and all is not lost. Over 4.5 million watched our videos, one million people signed our #HandsOffOurNHS petition and hundreds of thousands of people engaged with our content. And millions of people voted for other political parties whose stance on the NHS is much closer to our own. It’s clear there’s a huge and growing audience for our message and an army of people willing to get involved to save our NHS.

The strength of NHS campaigning forced the Conservatives to make electioneering promises on the NHS and we will hold them to what they said. We will expose the lies and campaign for safer funding, safer staffing, an end to privatisation and protection for the NHS from trade deals.

Now is the time to redouble our efforts, take to the streets and join the fightback.

The news that Conservatives have been asked to form a Government doesn’t bode well for the future of our services, the last ten years have shown exactly how they defund, deregulate and privatise the NHS and now they intend to include its services and drugs in trade deals with the Trump administration. Pursuing their plans for local 'integrated care systems' - 44 separate NHS units in England - will see further rationing or exclusion of important NHS treatments and more, huge multi-billion pound private contracts. But they won't get away with it in silence - we won't let them.

Our Co-Chairs of Keep Our NHS Public, Tony O'Sullivan and John Puntis said:

We are truly proud of the campaign waged in defence of the NHS by Keep Our NHS Public, by Health Campaigns supporters and so many NHS staff, students and campaigners up and down the land. We have made a very real difference and have contributed to ensuring the NHS was high in voters minds. We are very disappointed at this election result. We believe the result could have been even more disappointing if we had not been so active. By challenging the lies of Boris Johnson, Matt Hancock and those who went before them we have highlighted the truth about the crisis in the NHS. Now we must deny Boris Johnson the way clear to continue his project, which includes trade talks with the US which will endanger the NHS in a US-UK trade deal post-Brexit. We now resolve to continue to campaign, lobby and fight to ensure that our voice is heard and our demands are met to fund the NHS fully and to return the NHS to 100% public duty and provision as soon as possible.

Now more than ever we need you - join, recruit, donate and volunteer with Keep Our NHS Public today. This will be the fight of our lives. Here are some things you can do:

Donate to the #NHSforAll Crowdfunder

After last night's result, the threat to our National Health Service has stepped up in a big way - we need to up our game to meet the danger. We know that it's possible to fight a Tory government's NHS cuts and win, because we've seen it done time and again, as with the recent saving of Charing Cross Hospital by long-term campaigning.

How much we can do depends directly on what resources we have. We are raising money to inform the public about the threat to our health service; to take the government to task over its destructive anti-NHS agenda; and to support local communities as they mobilise to defend their services.

Become a member of Keep Our NHS Public

Become a member of Keep Our NHS Public to take part in our fight to uphold a free and universal National Health Service! We are the largest and most significant nationwide membership organisation fighting to save our NHS, campaigning around reversing privatisation, protecting local services from cuts, demanding an end to PFI debts, and opposing racist "Hostile Environment" policies in the NHS. We have almost 70 local groups across the country, and more starting up all the time. Join up today and be part of the fight to defend our health service!

We fought a hard campaign about which we can be incredibly proud. And our movement is now stronger than ever. This means we're in a strong position to grow and keep up the pressure whatever comes next.

During this election, Keep Our NHS Public and Health Campaigns Together members and supporters, made nearly 50 mainstream press appearances reaching millions of people.

We appeared regularly in national news outlets, Daily Mirror and in the I, Metro, Morning Star, The Sun, Dazed&Confused, The Independent, the Guardian, the BBC and Sky News to name a few. Not to mention the amazing work getting into the local press by our local campaigners up and down the country.

Some media highlights include: 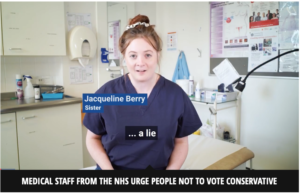 Daily Mirror: Doctors' and nurses' powerful reasons why you shouldn't vote Tory if you love our NHS 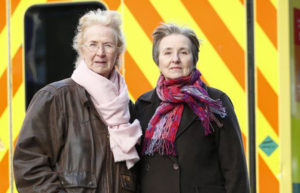 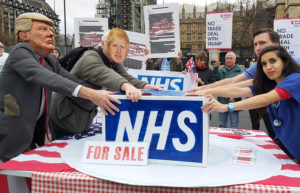 The Guardian view on Boris Johnson and the NHS: a problem of trust

Our reach in this campaign has been impressive:

Even though our supporters, members and staff and worked tirelessly to achieve all this, we will not rest until the NHS is safe. If you want to help please donate to the #NHSforALL Crowdfunder and get in touch. 2020 is when the struggle for our NHS continues.