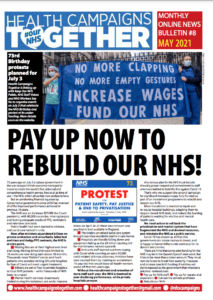 Health Campaigns Together is an alliance of national and local health campaigns, other campaigning groups and trade unions who share the same concern: our NHS and how to save it from more cuts and privatisation. It has national affiliation from all the main health unions (UNISON, Unite, GMB) plus a number of non-health trade unions and many local trade union bodies and branches, campaigns and political parties committed to fighting for our NHS.

The call to launch Health Campaigns Together went out from Keep Our NHS Public in Autumn 2015 when we realised that, although there were many groups doing excellent work all over the country, there was no easy way to share views, plan, and carry out joint events. The new coalition was established in a 200-strong conference in London in January 2016, where Health Campaigns Together became the first campaign to warn of the secretive process of drawing up Sustainability and Transformation Plans.

From the end of 2016 Health Campaigns Together and Keep Our NHS Public worked with The People’s Assembly Against Austerity  and trade unions to organise the largest ever national demonstration on the NHS in London 4 March 2017 (#ourNHS), attracting over 200,000 people and gaining widespread publicity.

This was quickly followed by the NHS Roadshow events which took place in the run-up to the General Election in June 2017.  Local days of action took place on 1 and 5 July 2017 to celebrate the NHS’s 69th birthday.

On 3 February 2018 we again worked with trade unions and The Peoples Assembly to build a major national day of action highlighting the winter crisis in the NHS, with 60,000 marching through London and a thousands more supporting local events across the country. And on 30 June 2018 Health Campaigns Together worked with the TUC and The Peoples Assembly to build a lively and colourful march through London to celebrate the NHS 70th birthday.

Health Campaigns Together has held a number of successful national and regional conferences. These have included a major 400-plus conference in Hammersmith Town Hall on 4 November 2017, and a successful 200-strong Reclaim Social Care conference in Birmingham in November 2018, which led to the establishment of a free-standing campaign on social care, affiliated to Health Campaigns Together.

2019 has seen Health Campaigns Together working with the health unions to build a joint campaign to Make Our NHS Safe for All, and working with the TUC and others including Keep Our NHS Public to build a major Mental Health Crisis Summit in London on 28 September.

You can download the free quarterly Health Campaigns Together newspaper (and back issues) from the website, as well as order printed copies.

Further information regarding the Health Campaigns Together campaign is also available via the website, which also has news, comment, analysis on social care, privatisation, the NHS Long Term Plan, a calendar of events, links to relevant articles, and archives on past events.

Unlike Keep Our NHS Public, which is based on individual membership, only organisations can affiliate to Health Campaigns Together.