Over 60,000 people marched on Downing Street on Saturday 3rd Feb.
Health Campaigns Together have an excellent array of photos and video from the day on their website.
Speaking on behalf of KONP and Health Campaigns Together KONP Co-Chair, Tony O’Sullivan, joined other amazing speakers on the platform at Downing Street to demand the Government properly fund Our NHS.
See the video below, Tony can be heard from 37.30 onwards.

Gloucestershire – Stroud Against the Cuts 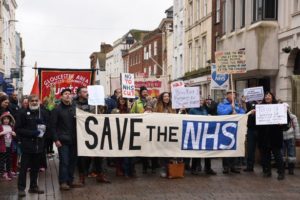 Southampton KONP sent us an update of their fantastic activities on the day:

Southampton Keep Our NHS Public, the People’s Assembly and Unite the union organised a rally at the Bargate calling for more funding for the NHS. About 200 people were there, many passers-by joined for a while, the Red Stars Choir sang and we collected just over 400 signatures on our petition designed to look like a prescription for the NHS. There was a full page advert on the Southern Daily Echo. The star of the day was the skeleton on a trolley, representing patients. Speakers: Sara Bogle (Chair of the Health Overview & Scrutiny Panel of the Council), Joyce Still (UNITE’s NEC), Alan Whitehead (MP) and Helen Field (PA). Campaigners from elsewhere in Hampshire and even from Dorset and Wiltshire joined us.

We had good media coverage: an interview on Radio Solent, something on Meridian TV and lots of photos in The Southern Daily ECHO 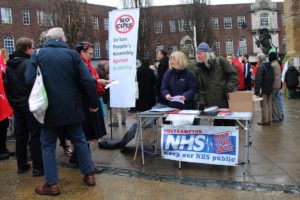 Leicester sent us the following update from their efforts on the 3rd Feb:

Around 50 people gathered in Leicester to demonstrate their support for the NHS and to protest at the underfunding of the service. Demonstrators gathered outside the city centre site of University Hospitals of Leicester as part of the nationwide action in support of the NHS. Particular concern was expressed about the failure of government to pay staff properly and address the staffing crisis and about threats in the STP to leave the people of Leicester, Leicestershire and Rutland with insufficient acute and community hospital beds.

Merseyside KONP joined other campaigners on the day of action, they said:

About 200 people attended, packing the forecourt in front of the Royal Liverpool Hospital. There were speakers from KONP, Blacklist Support Group, GMB, Unison, Unite, Socialist Health Association, and Save Liverpool Women’s Hospital.

We gave out 1000 copies of the new national KONP leaflet from Carol
Ackroyd and The Day in the Life has also gone into the hospitals. 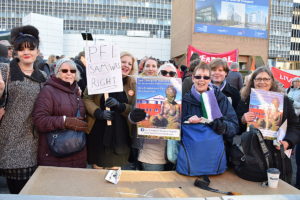 Our friends at KONP NorthEast sent us the following picture 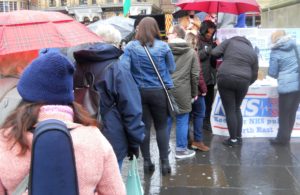 The photo shows a queue of people to sign the petition at the Monument, Newcastle upon Tyne – there was an average of one person every thirty seconds.
KONP North East commented that it ‘sent a LOUD AND CLEAR MESSAGE TO NEWCASTLEGATESHEAD CCG that we believe in a publicly funded, publicly provided and publicly accountable NHS. We do not accept the underfunding of the NHS and social care, with the subsequent cuts to services in the North East .#FixOurNHS #FundOurNHS’
There was excellent hourly coverage on Metro Radio, plus a good write up and video report from The Chronicle.

Head to the Health Campaigns Together site to see more of the regional demonstrations including photos and descriptions from Leeds, Sheffield, Middlesborough, Chester, Bristol, Bedford, Huddersfield, Nottinghamshire and Stafford.

Great effort to everyone who braved the weather around the country, our next national demonstration will be for the NHS’ 70th Birthday.
Keep up the momentum from the demonstration by continuing to write to your MPs, leaflet in your communities and spread the word on social media.