739 women and their unborn children were refused free NHS maternity care at Whipps Cross Hospital, Newham Hospital and the Royal London Hospital in 2018/19, as they were deemed ‘overseas visitors’ by Barts NHS Trust. All hospitals are run by the Trust, and the figures were revealed by the Barts NHS Trust Board in response to a question by Keep Our NHS Public member group Newham Save our NHS. The total number of women invoiced represents approximately 5% of women in the three north-east London boroughs concerned. 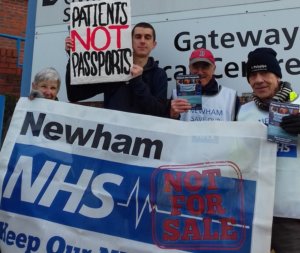 Campaigners from local health campaign groups who revealed the figures believe the women were not really ‘overseas visitors’, but instead women who had been deemed not ‘ordinarily resident’ in the UK due to Government policy changes made in 2015.

These changes mean that over 600,000 people including 120,000 children are now no longer eligible for free non-emergency NHS care. This means they will be invoiced for 150% of cost price will be charged for all non-emergency care received, including maternity.

35 children were also charged for NHS care in Barts NHS Trust in the same financial year, though it has not been made clear if these were children born to mothers who had received invoices for maternity care.

These revelations follow on from Barts NHS Trust’s participation in an identity checking pilot undertaken by the Department for Health and Social Care in 2017. The maternity unit at Newham hospital and the renal department at the Royal London Hospital were used as sites for the pilot. Figures for this have not been released despite Freedom of Information Act requests being made by North-East London Save Our NHS (NELSON) an umbrella group of community NHS campaigns.

While the total charges invoiced to the women in Barts NHS Trust has not been revealed, a similar investigation by Save Lewisham Hospital campaign last year showed Lewisham and Greenwich NHS Trust issued 190 invoices for inpatient maternity care to a value of £1,148,918 averaging £6,047 per mother in 2018/19. Up to £9,000 was charged to women who experienced “complicated delivery” which included stillbirth. Three women died as a result of charging for maternity care, a report supressed until after the General Election showed in December last year.

The Save Lewisham Hospital Campaign recently secured an inquiry into Lewisham and Greenwich NHS Trust’s partnership with credit checking agency Experian to target patients likely to not be eligible for free NHS treatment. However, NELSON campaigner Rosamund Mykura said: “Barts has told us they didn't involve Experian at all".

"The Home Office's reputation has been trashed by its repeated mistakes, which leads to denial of free NHS care for innocent patients, as seen in the Windrush scandal.

“It is wrong that residents feel intimidated by the NHS. Sending patients' names to the Home Office for checking is a bad for the affected patients, and for those who, having heard about patient charging, are then too scared to engage with NHS maternity services. “

“Pregnant women can be asked to prove they are 'ordinarily resident' to get free treatment. The rules are complex, leading to NHS mistakes, which can affect any one of us, especially when the Home Office gets its data wrong."

“Charging overseas visitors for NHS Care is barbaric in that it deters the most vulnerable in society from seeking the medical care that they need in a timely fashion through fear of destitution and deportation.

“Charging also goes against the founding principles of the NHS which were of a comprehensive health service, publicly provided, publicly funded through taxation and free at the point of delivery to all. Nye Bevan never intended the overseas visitor to pay and indeed a large proportion of NHS staff, many of whom work in the most lowly paid jobs, are from overseas. The NHS would not survive without them and we owe them a debt of gratitude.”