Keep Our NHS Public came into being in 2005 and we are proud of our stance in defence of the National Health Service. We are also proud now to launch our ‘Patrons’  page. 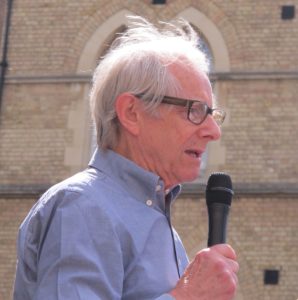 Our very first patrons in December 2017 were renowned film director Ken Loach and his collaborator on many projects, scriptwriter and lawyer Paul Laverty.

Since then a rapidly growing number of prominent individuals and groups have agreed to stand with us publicly to state loud and clear: 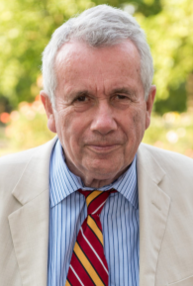 Martin Bell had a very distinguished career as a War Reporter and foreign correspondent with the BBC. Since the early sixties he covered eleven conflicts and reported from eighty countries , making his name from wars and conflicts in Vietnam, the Middle East, Nigeria, Angola, Yugoslavia and in Northern Ireland during “The Troubles”.
Often known as “The Man in the White Suit” Martin won the Royal television Society’s Reporter of the Year in 1977 and in 1993 and was appointed an OBE in 1992. That year, whilst covering the war in Bosnia, he was seriously wounded by shrapnel whist reporting from Sarajevo. Subsequently he became MP for Tatton- from 1997 until 2001- standing as an Independent.
Martin is a UNICEF UK Ambassador for Humanitarian Emergencies – working to improve the plight of children affected by conflict and natural disaster.
He is the author of many books, including

The NHS is a shared national asset. It benefits us all and we must do all we can to protect it [April, 2018] 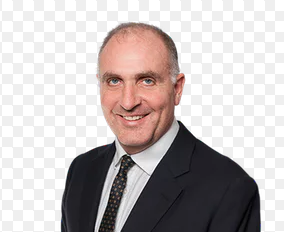 John Crace is a Journalist and Critic . He is the author of “The Digested Read” column in The Guardian and is that Paper’s Parliamentary Sketch Writer.
He has written several popular “Digested Read” Books- among them “Brideshead Abbreviated”, “One Football Fan’s Fear of Success” and “The Digested Century”.
He has famously characterised Theresa May as “The Maybot” and wrote “I, Maybot” about her. 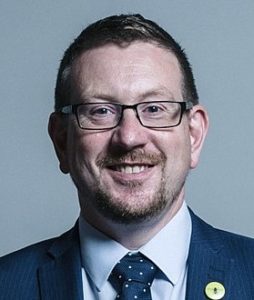 Andrew is Labour MP for Denton and Reddish and has been since 2005. He has recently been appointed to Shadow Secretary of State for Communities and Local Government and is a member of Unite and the Co-operative Party. 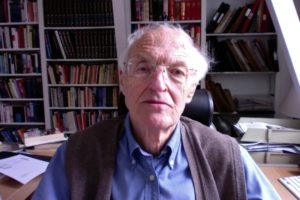 Michael Frayn is one of this country’s foremost Playwrights and Novelists- and one of the very few to succeed in both genres. He has received over 20 prestigious Awards for his work in both Drama and the Novel, for translation and for Philosophy.
He is possibly best known as the author of the farce ‘Noises Off’- described by one critic as ‘Likely to be the funniest play written in my lifetime !’ He is well known for his other dramas- ‘Copenhagen’ and ‘Democracy’. His novels include ‘Towards the End of the Morning’, ‘Headlong’ and ‘Spies’- all of which have been tremendous successes.
He has translated many books and his Philosophical work includes ‘The Human Touch: Our Part in the Creation of the Universe’.

Because it’s the noblest institution we have managed to create. [March, 2018] 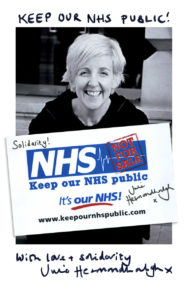 Julie is an actor famous for her roles in British television shows such as Coronation Street and Broadchurch. She has long been a supporter of Keep Our NHS Public and we are proud to now have her on board as a Patron. 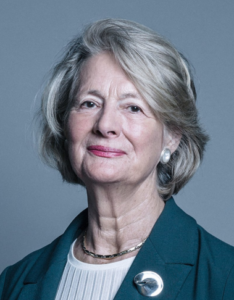 Baroness Margaret Jay has worked as a Journalist on leading news programmes, both for the BBC on “Panorama” and for Thames Television on “This Week” She has always had a strong interest in Medicine and has been a notable campaigner for HIV Aids. She was a Founder / Director of the National Aids trust in 1987.

Adam Kay is a former junior doctor and the author of a Sunday times bestseller. His recent book, This is Going to Hurt – Secret Diaries of a Junior Doctor, has received international acclaim. Adam’s book is a colourful memoir of his time working in the NHS and even recently appointed health secretary Matt Hancock claims to have read a copy! Adam is passionate about standing up for our NHS and those who work in it. He is also an award-winning comedian and writes for film, and television. He lives in London.

“I could not feel more strongly about keeping the NHS public – It’s our greatest national asset, and we must defend it. Our lives depend on it.” [March, 2018] 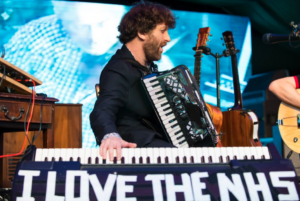 Lau are a three piece Folk band from Scotland and England. They have won the BBC Radio 2 Folk Awards Best Band award four times. They often perform with pro-NHS banners and signs on stage with them and we are delighted to have them on board as Patrons 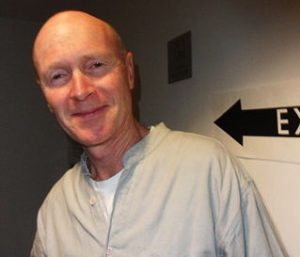 Paul Laverty is a scriptwriter and lawyer. He has written and collaborated with Ken Loach on many occasions including The Wind that Shakes the Barley and the recent I, Daniel Blake. Like Loach his work is often political and portrays socially conscious themes. We’d like to thank him for supporting us as a new patron.

There are many impressive features of the KONP campaign and the people who run it:  (1) Its principles, which are in accordance with the proud 70 year history of the NHS;  they are crystal clear about kicking out the opportunist privatisers, and protecting the NHS from the most dangerous plague of our times; (2) Their competence.  It is clear their members understand the nuts and bolts of the NHS from the inside.  They can’t be hoodwinked by complicated jargon and can spot dirty tactics like those who set up the NHS for failure by underfunding and then claim to be efficient; (3) Preventative tactics. Their determination to make the NHS stronger by encouraging a radical transparency.   Informed debate is their way of confronting those who are determined to make profit out of the NHS. So good luck to them all. [December 2017] 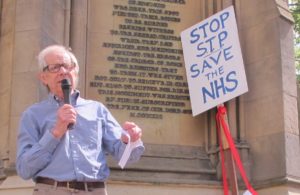 World famous film and television director, twice winner of Cannes’ Palme d’Or, Ken Loach is renowned for the socially conscious themes in his work. Kes, Cathy Come Home, The Wind That Shakes the Barley and I, Daniel Blake are just four of his notable contributions to the British film industry.

Ken is a committed activist and member of the Labour Party. He has pledged his support for democratic rights internationally and is vociferous against the impact of austerity on millions of people in Britain. He has spoken at numerous rallies and demonstrations calling for more funding and an end to privatisation in the NHS . We are delighted to have him on board as our Patron.

I am very pleased to support KONP. We should reassert the principles of Nye Bevan’s National Health Service wholly funded by fair taxation with everyone employed directly, from cleaners and caterers to consultants and administrators. No outsourcing, no zero hour contracts, and no place for private profit.

We must campaign to ensure that the politicians we elect should not only commit to reversing privatisation but to removing private providers entirely. A renewed NHS that works for us all is a great prize that we can win – the tide is with us.  [December 2017] 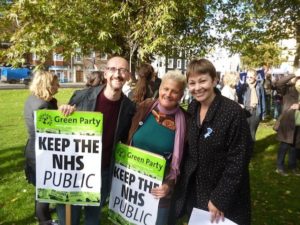 Caroline is co-leader of the Green Party with Jonathan Bartley as well as its first MP, representing Brighton Pavilion. She served as an MEP from 1999 until 2010 and as an Oxfordshire councillor previously. 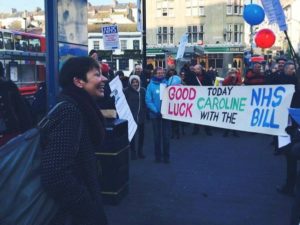 Caroline continues to be an active campaigner on a range of issues and has been voted the UK’s most ethical politician in 2007, 2009 and 2010 by readers of the Observer. She is also in the Environment Agency’s Top 100 Eco-Heroes of all time.

Caroline was the first MP to sponsor the NHS (Reinstatement) Bill as a private members’ bill in 2015/16. 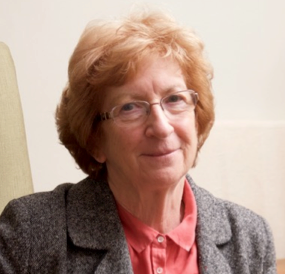 Baroness Meacher worked in the NHS over many years, as a social worker and ultimately as Board Member and Chair of the East London NHS Foundation Trust.  She was also a Mental Health Act Commissioner in the 1990s. We are proud to call her a Patron.

Oneworld was founded in 1986 by husband and wife team Juliet Mabey and Novin Doostdar as an independent publishing house focusing on stimulating non-fiction. They are the publishers of NHS SOS and of the last two Booker Prize winners. 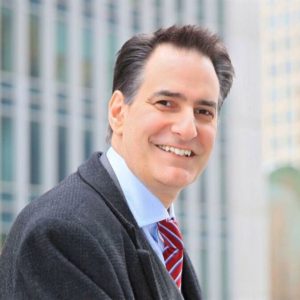 Peter is a high Profile Lawyer nominated for Legal Personality of the Year in 2016. He is a Journalist, Filmmaker, Political and Social Commentator, media personality and campaigner who is well known for his films debunking Political deceit which have been watched over 20 million times.

“I back KONP 100% in its fight to keep our NHS public, for my children and my children’s children, for every man, woman and child. The NHS is one of our proudest achievements, it represents all that is noble and good in us and it belongs to us, the people, you and me, let’s keep it that way![June, 2018]

Cultural Critic and ex Prof of Literature at London.

I passionately support KONP’s objective and believe the NHS to be at risk under the current Government. The NHS is a priceless jewel for all of us.  It is under greater threat than at any time since WWII. [March, 2018] 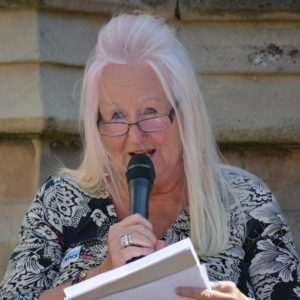 Named after national health service founder Aneurin Bevan, Aneira Thomas is the first baby to be born in the NHS and as a former nurse herself, is a true advocate for the service. Aneira often tells of a time before 1948 when family members died or suffered great hardship for want of medical attention. Aneira is a credit to NHS campaigning and uses her unique position to give much of her time to speaking to the media and making public appearances in defense of our NHS and it’s continuance as a publicly owned, publicly provided service.

The NHS is not only a great practical organisation, it stands for the belief that every citizen is to be valued equally in our society. [March, 2018] 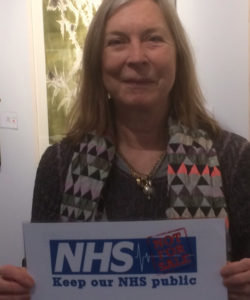 Salley Vickers has written many novels including the best selling “Miss Garnet’s Angel” and “The Cleaner of Chartres.” The others include “Dancing Backwards”, “Mr Golightly’s Holiday” , ”The Other Side of You”, “Cousins” and, published this month, “The Librarian”.
She has worked as a Dancer, A Cleaner, A Teacher of Special Needs Children, An Artist’s Model and a University Teacher of Literature, and as a Psychoanalyst.
She was born in Liverpool, studied at Cambridge and now lives in London.