During the first wave of the pandemic, the Government put car parking charges for NHS staff on hold. However, they are planning to reinstate charges despite the second wave being upon us and many trusts already have. Nurse Iain Wilson and KONP co-chair John Puntis have co-authored a response to the current scandal and call for an end to charging and explain why privatisation needs to end if we’re going to win.

There’s lots to be angry at the government for when you work in the NHS - their failure to prepare for the pandemic, their failure to respond to the pandemic, the fact they blame NHS staff when it goes wrong, the staff shortages, the removal of the training bursaries, pay restraint, privatisation of workplaces, blaming immigrants when we should be thanking them for working tirelessly, and so on,

But for many members of staff reinstating car parking charges is the final straw. If ever you needed a sign that the Conservative government lives and works on a different planet from us, it is this.

Throughout the pandemic, colleagues have had to move into hotels so they can continue to work on the frontline and not expose their families to risk. And financial support for those forced to make this choice as also been removed. Recently we discovered that outsourced workers from St James’s hospital in Leeds were told that NHS England was no longer paying for their accommodation despite the second wave.Staff have also been forced to change out of work clothes in the hospital changing rooms, then changing again in cars and on doorsteps to make sure we keep the virus from infecting loved ones. Hospitals, homes and public transport have been the tinder boxes for this wildfire pandemic, so NHS staff have been doing all we can to keep those three places as separate as possible - even though we must go into the hospital

It is incredible that the Government intends to make a workforce of a million people start cramming back on trains and buses – because that is the consequences of these charges.

Not only is it unsafe, but it is also difficult to get trains and buses at the right time for the early starts and late finishes. Buses are still restricting the number of people allowed on - and trains are running reduced timetables - which has added considerably to commute times. 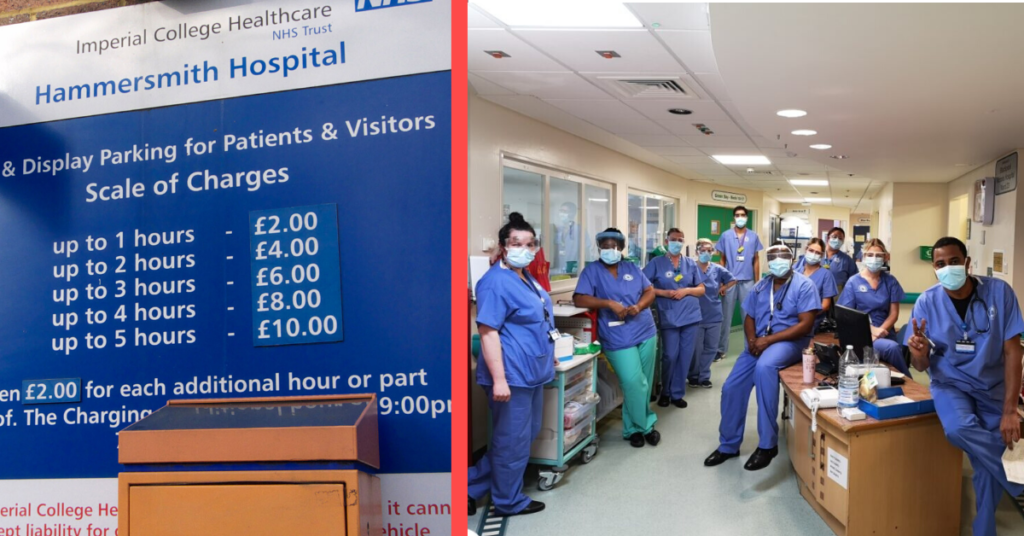 It is not just staff who are penalised financially, patients and their visitors, family and loved ones also. On top of the already high rates of car parking charges, there is a strict policy of fines too. Many of the persistent offenders are senior doctors moving between hospitals, who despite already paying £60 a month for parking can’t find a designated space when they arrive to do an outpatient clinic. These charges are also levied on those who only use their car for making out of hours and emergency visits to see patients.

And the really troubling thing, is that free hospital car parking could produce massive VAT bills for NHS trusts which are already strapped for cash. Since 1992 the Treasury required hospitals to pay back 6% annual interest on the value of their capital assets. This ‘capital charge’ (effectively a tax on hospitals) was presented as a way of ensuring that assets were used more efficiently. To compensate, managers were forced to consider how to generate income, including car park charges at rates comparable to nearby private car parks (i.e. efficient use of assets).

This doesn’t mean we shouldn’t back the call for the return of free hospital car parking, but it does show how the way our NHS is currently run, needs reform too. This example of privatisation and the drive for hospitals to be more like businesses has made them less sensitive to the needs of patients, visitors and staff. We therefore must object to car parking charges and fines in the context of also opposing the current business model of health care where financial considerations override the best interests of patients.

Here are some things you can do to back to the call to end NHS car parking fees: