On Saturday 22 September over 1000 people attended a rally to Save Liverpool Women’s Hospital from plans to relocate and downgrade the hospital to a smaller unit. 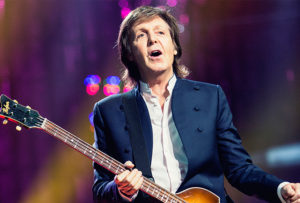 Many Keep Our NHS Public members and supporters joined SLWH in solidarity on the day. KONP co-chair, Tony O’Sullivan, joined (amongst others) Labour MP Emily Thornberry, Labour MP and Shadow Secretary of State for Health and Social Care Jon Ashworth and President of KONP Wendy Savage in speaking at the demonstration. On behalf of KONP and Health Campaigns Together (HCT) he said;

Congratulations on your fantastic campaign. I trained as a medical student here in Liverpool. I have been a consultant paediatrician and retired two years. I am co-chair of Keep Our NHS Public and deputy chair of Health Campaigns Together. You have done a wonderful job in your Save Liverpool Women’s Hospital campaign and you have our full support from both KONP and HCT.

Three years ago KONP set up HCT and called on all campaigns and unions to work together on what we agree to save the NHS – We know that together we can win. And we have had important victories:
From Lewisham where we defeated Jeremy Hunt in his effort to close the hospital in 2013 to Huddersfield Royal where the campaign has forced a rethink of the plans to close the Royal Infirmary this year; from overturning plans for trusts to set up subsidiary companies – where unions and campaigners have united in winning several fights to halt these SubCos and may have forced a rethink nationally – to toxifying STPs & ACOs.

We have zero trust in this Government and in NHS England’s senior management. As a doctor, we are supposed to weigh up the evidence and decide on what is best. But the evidence that I see is that NHS England does not use evidence to support its policies! Our own Greg Dropkin (Merseyside KONP), present here, has studied NHSE’s consultation to restrict 17 medical interventions under the NHS and has found that, in all but one, NHSE has ignored in total or in part NICE clinical guidance on those same procedures.

NHSE is putting through the government policy of underfunding, privatisation, mergers, closures and demoralising the workforce. So: no, we dont trust them!

When they say they want to integrate services, in fact they are dis-integrating the NHS

When they say they want community-based care, they use that as the cover story for closing hospitals … and then go on to slash the very community services that are supposed to deliver community-based care. The hostile environment of the Home Office is in the NHS in more ways than one.

We do not trust them – we won’t accept their tarnished policies.
Thank you for standing firm. We stand with you and together we will win.

Thank you to all those who marched on the day to show their support of the Save Liverpool Women’s Hospital Campaign and against the closure of vital community hospital services.
Despite the weather the atmosphere was joyful and defiant as can be seen in the below twitter video and our Facebook Live video from the day. 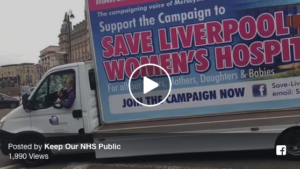 The demonstration garnered national as well as local coverage with both BBC News and ITV News reporting on the day.

If you would like to support the campaign please consider signing the petition or get in contact with The Save Liverpool Hospital Campaign via their website or email.