Backed by a near unanimous vote of UNISON members working as domestics at Princess Alexandra Hospital Trust in Harlow have announced six days of strikes against their service being subjected to market testing.

The strikes, organised on the back of an 84% turnout will begin with a single day on June 6, the date of the next Trust board meeting, with further possible action on 11-12 June and 18-20 June. Supporters are being urged to sign the petition and donate to the strike fund.

The domestic staff warn that if their services were to be transferred into the private sector it would spell ‘disaster’ for their patients. Princess Alexandra Hospital currently has one of the lowest rates of infection in England, including instances of MRSA. 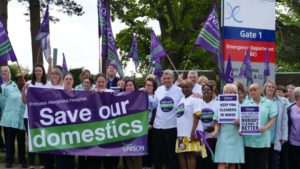 By contrast cleaners from the hospital have recalled the brief privatisation of services in the 1990s, when Mediguard had to hand back the contract after just one year because of its failure to maintain standards.

It’s almost exactly 35 years since Margaret Thatcher’s government triggered the first strikes by hospital domestics against the imposition of competitive tendering for NHS support service contracts, which resulted in a massive deterioration in hospital hygiene standards as trusts were forced to accept the lowest bid regardless of quality concerns.

Twenty years later, in 2004 the Department of Health drew the link between compulsory competitive tendering and declining standards of hygiene and support services.  Recent research using data for 130 National Health Service trusts from 2010–14, found that private providers are “cheaper but dirtier than their inhouse counterparts.”

Princess Alexandra staff also warn that their pay and conditions will fall below their NHS colleagues if their services are outsourced, because a private company would not be part of any future NHS pay awards, and new starters could face substantially worse employment terms.

This article originally appeared in The Lowdown

The Lowdown is an evidence based website covering healthcare news, analysis and investigations to create change to our healthcare and NHS, produced by journalists and researchers campaigning for the NHS.