Removing contraceptive services from millions of women in the developing world will cause more unwanted pregnancies and increase deaths from unsafe abortion, writes Keep Our NHS Public president Wendy Savage.

Donald Trump has a long record of being anti-abortion. His decision in January 2017 to restore the ‘global gag’ or ‘Mexico City policy’ instigated by Ronald Reagan in 1984, meant that all funds were withdrawn from NGOs who were providing reproductive health services if they performed or referred women for induced abortion.

Six Southern US States have now passed laws outlawing abortion outright, the latest being Alabama who banned all abortions including those for pregnancies resulting from rape or incest, only permitting abortion if the woman’s life is at risk – a rare event these days. This has been a step backwards for women’s right to choose globally. At home too, things leave a lot to be desired. 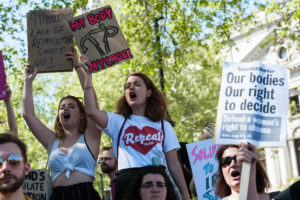 The recent comment in the Guardian by Emma Campbell of Alliance for Choice that the law in Northern Ireland is stricter than that recently passed in Alabama was greeted with horror by some commentators, but rightly highlighted the longstanding anomaly that the 1967 Abortion Act does not apply to Northern Ireland.

Not only is the current abortion legislation literally Victorian, the 1861 Offences Against the Person Act Sections 58 and 59 make it a criminal offence for the woman herself (s58) or other persons (s59) to procure or administer drugs or instruments to cause a miscarriage. Offences which, can include life imprisonment as the severest penalty. In addition NI has another law which compels people to report if they learn of a crime with a penalty of more than five years imprisonment.

One young woman has been prosecuted for taking abortion pills in the first trimester of pregnancy.  She miscarried in the toilet and was reported to the police by her flat mates. She was given a suspended sentence but having a criminal record will have a detrimental impact on her choices of employment.  Another woman who obtained abortion pills for her daughter is awaiting trial. The police learned of this from the doctor’s practice and the Child and Adolescent Mental Health Services (CAMHS) where the daughter had been referred because of problems with her abusive boyfriend. 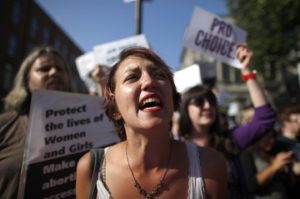 In Nov 2016 a 15 year old sued the NHS for the cost of her abortion but the Supreme Court ruled against her. However in a surprise move in June 2017 Theresa May announced that the NHS would in future provide abortions free for women from Northern Ireland. This was the result of an amendment to the Queen’s speech debate by Stella Creasy Labour MP for Walthamstow, which had cross party support. After losing her parliamentary majority in the 2017 General Election, Theresa May asked for support from the DUP to form a Government, this has meant a deafening silence on this issue from the UK Government since.

Arlene Foster the leader of the DUP, now propping up the Conservatives has been unequivocal in her opposition to abortion, in an interview with the Guardian in 2016 she went on record saying,

The problem is, outlawing abortion doesn’t make it go away. An estimated 50,000 women have come from Northern Ireland to the UK to terminate their pregnancies since 1968 and not only did they have to pay the cost of the abortion there is the cost of travel and and accommodation. An unknown number have used previous UK addresses and some women also travel to the Netherlands.

In 2017 The Northern Ireland Human Rights Commission (NIHRC) lost a Supreme Court appeal over the legality of Northern Ireland’s abortion law as they ruled they did not have standing to bring the case, only an affected woman could do so. However a majority of judges said the existing law was incompatible with human rights law in cases of fatal foetal abnormality and sexual crime. 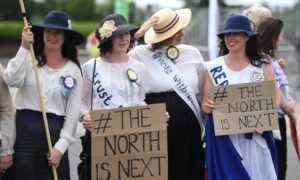 Before the Northern Ireland Government ceased to meet on January 2017 Ministers had looked at the question of fetal anomaly. It is ironic that Northern Ireland has the highest rate of neural tube defect (anencephaly and spina bifida) in the UK, yet women cannot access abortion on these grounds. The committee report dated July 2016 recommended amending the law to permit abortions for fatal fetal anomaly but was not released until 2018. Until the government resumes there will be no progress on this area.

In October 2018 MPs voted for an amendment brought by Stella Creasy and Conor McGin (Labour, St Helen North), to force Karen Bradley the NI secretary ‘ “to issue guidance” to explain how officials can continue to enforce the region’s draconian Victorian-era abortion law’ arguing that it breaches Human rights law. This was largely symbolic but was passed by 207 to 117 votes and was important as usually MPs do not vote on devolved matters.

Also in October 2018 Diana Johnson’s (Labour Kingston on Hull North) Ten minute rule bill to decriminalise abortion throughout the UK had its first reading and passed by  208 votes to 103. It has no chance of becoming law unless given government time, which seems unlikely to happen. But it  was an interesting debate with women MPs talking about the own abortions – a sea change in the House of commons.

In April 2019 the Women and Equalities Committee of the House of Commons reported on the issue of abortion in Northern Ireland and they called on the UK government to resolve the issue of the standing of the NIHRC within six months and for guidance to health professions about referring to the NHS in England to be clarified.

The UN’s Convention on the ending of all forms of discrimination against women (CEDAW) has been calling on the UK government who is a signatory to resolve the issue  since its inception in 1982 without success. 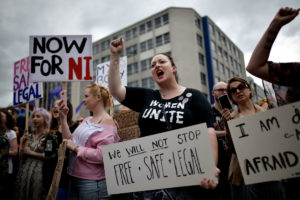 It is a year since Ireland voted to repeal the 8th amendment, which gave the fetus equal rights to the mother and we could learn a lot from how they went about this. They set up a Citizen’s Assembly, which surprised many politicians with its radical report. Once the referendum overturned the 8th amendment by 2 to 1 majority, the Irish Government passed the necessary legislation speedily and the system was set up, doctors trained and it went live on 1stJanuary 2019. An amazing result!

Access to safe legal abortion is a Human rights issue as well as a medical issue and it is regrettable to see the backlash against abortion in the USA and in other countries such as Poland, as well of course as in the north of Ireland. However, there is a strong movement of support for the pro-choice position as the Irish referendum has shown, we must not give up hope and we must continue to campaign for women’s right to choose.

The recent Alabama legislation, and Trump’s long appalling record on women’s issues is another reason if you should need one to join the Together Against Trump – Stop the state visit protests called for Tuesday June 4th: