Professor Stephen Hawking gave a wonderful speech at the Royal Society of Medicine Saturday 19 August. [Photo: Royal Society Of Medicine] The evening beforehand, Secretary of State for Health, Jeremy Hunt attacked the pre-released speech in ignorant fashion on Twitter, press and later in The Telegraph accusing Hawking of ‘pernicious falsehood’.

Stung by the personal and shallow response from this top government minister, Hawking has replied with a clinical demolition of Hunt in an Opinion piece in The Guardian 25 August 2017 entitled ‘Jeremy Hunt can attack me all he wants – but he is wrong to say the NHS is working’.

‘NHS in England is undergoing a complete reorganisation into 44 regions with the aim of each being run as an “accountable care organisation” (ACO). An Aco is a variant of a type of US system called a health maintenance organisation in which all services are provided in a network of hospitals and clinics all run by the HMO company. It is reasonable to expect the powerful US HMO companies such as Kaiser Permanente and UnitedHealth will be bidding for the huge contracts to run these ACOs when they go out to international tender.’

‘The NHS is political, but not necessarily party political. I am a Labour supporter but acknowledge that privatisation increased under Labour governments in the past. The question is whether democracy can prevail and the public can make its demands for proper funding and public provision undeniable by any government.’

Read Hawking’s piece: it is a brilliant analysis of where the NHS is under current government policies, why the policies are wrong and dangerous and why relying on real evidence is so crucial to political integrity.

“Congratulations to the organisers of the ‘Talk NHS’ – Discourse in collaboration with the RSM. The day was an excellent debate on the NHS with a well-informed exchange of views from an panel of speakers important in its breadth and from a passionate audience committed to the survival and restoration of a fully public NHS.”

Press coverage of ‘Talk NHS’ and the Hawking/Hunt exchange 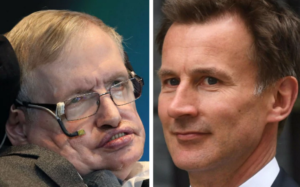 Press/media coverage of Hawking’s statement on NHS and correspondence

Guardian Opinion, Hawking 25 August 2017 ‘Jeremy Hunt can attack me all he wants – but he is wrong to say the NHS is working‘

BBC Online “Hawking worried about the future of the NHS” http://www.bbc.co.uk/news/health-40967309

Times “Hawking NHS crisis due to ‘abuse’ of evidence” https://www.thetimes.co.uk/article/stephen-hawking-says-nhs-in-crisis-due-to-abuse-of-research-7jcqbgtg5

City AM “Hunt hits back at Hawking” http://www.cityam.com/270519/jeremy-hunt-hits-back-stephen-hawking-over-nhs-after

BBC “I wouldn’t be here without the NHS” http://www.bbc.co.uk/news/av/health-40990288/stephen-hawking-i-wouldn-t-be-here-without-the-nhs

Source: @drbenwhite Bring Back The NHS