There’s been a pause in the government’s most recent attempt to extract and store information from patients’ GP records, in order to make it available to public bodies, researchers and others, including private companies.

The GPdataGrab, as it’s been called, aimed to collect patients’ entire GP records, without consent, unless patients became aware of the initiative and so had a chance to ‘opt out’. The data was to be stored in a centralised database from where it could be accessed by third parties, including private companies (for a fee) and, potentially, copied and stored elsewhere.

The pausing of GPdataGrab was largely in response to public outcry. However, the Health and Care Bill, now being considered by Parliament, reintroduces concerns about patient privacy by providing new powers for Ministers and others that could allow access to our personal health and care data in future.

The Bill makes it clear that the digitalisation of the NHS, and the valuable NHS data on which this depends, will encourage “a world leading health IT industry” that supports software developers and innovators. It’s clear that access to our data is a priority, not just as a resource for the public good, but also because it’s good for business.

The Bill is vague on detail, and open to interpretation, but our concerns include that it will:

What can be done?

The Health and Care Bill will have long-term and worrying implications for the NHS and its patients, not least for our personal privacy.  For a more detailed analysis read more here.

The response has to be total opposition to the Bill.

For more information and details about what you can do, go to our Scrap the Health and Care Bill page. 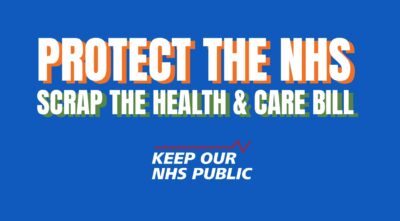