An excellent motion was passed including a robust call for a defence of the NHS in England now and a move to reinstate it ‘as per the NHS Bill (2016-17)’. (See the motion in full) 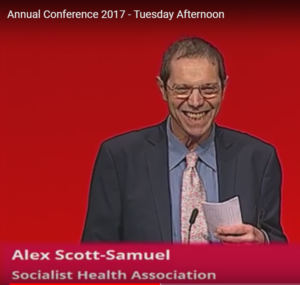 Alex Scott-Samuel of the Socialist Health Association and Doctors For The NHS proposed ‘Composite 8: The NHS’ very movingly (speech) and the motion was seconded by Sue Richards of Islington CLP (speech). Both are members of Keep Our NHS Public. The motion was carried unanimously.

Scott-Samuel thanked Jon Ashworth for his speech prior to the motion. He went on to name accountable care systems and ACOs as a dangerous structure for healthcare, based on the American model, which will enforce capping of damaging cut budgets and will lead to restricted access to a diminished range of services – the inevitable result of the imposed, disastrous £22bn of underfunding of the annual NHS budget by 2020/21.

Sue Richards reminded Jon Ashworth, Shadow Secretary of State for Health and Conference that this was one year on from conference committing to reinstating the NHS fully – abolishing the internal and external market forces, but that pledge had not materialised in shadow team policy, including at conference.

The motion goes further. It opposes the sell-off of £5bn of NHS estate planned under the Naylor Review adopted by the Conservatives. Under the terms of this motion, the 2012 Health & Social Care Act would be replaced by legislation restoring a universal and comprehensive fully publicly funded, owned and provided NHS restoring full duties to the Secretary of State. This reaffirmed the position the 2016 conference voted for, but which had not been adopted by the Shadow team.

On Sunday 17 September, Jeremy Corbyn stated his commitment on the Andrew Marr Show that the Labour Party would adopt conference-agreed policy direction. If this practice is realised, then we could be on the cusp of a dramatic strengthening of commitment from Labour – confident as they are in predicting they will be the next government – to restoring the NHS to its former vision. 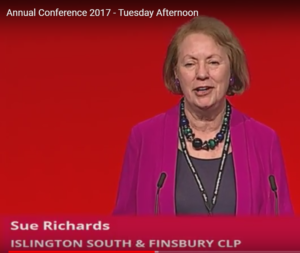 The policy as agreed would end the era of privatisation, and of internal or external markets, would end use of new PFI contracts and bring back into the NHS’ the current PFIs used to extract profits from NHS core funding and undermining the stablility of so many NHS hospitals and trusts. and deliberate defunding of the NHS. There is also the commitment to reinstating NHS student bursaries and an end to the pay cap impoverishing and demoralising the 1.3 million NHS staff. The end to the ideological defunding of the NHS will require greater level of funding than is currently being recognised.

Thank you to all the campaigners – keep up the work

Hard work and great commitment went in to achieving the adoption of this motion by NHS campaigners in the Labour Party – we thank you.

And related initiatives have been important in helping to strengthen the mood for change included the #NHSTakeback pledge and Allyson Pollock’s article in OurNHS on Labour’s manifesto – those involved include We Own It, the Campaign for NHS Reinstatement Bill, Keep Our NHS Public, Health Campaigns Together, OurNHS, Socialist Health Association, NHS Support Federation, Doctors for the NHS, Momentum, 999 and others.

It is important to follow up these important developments in discussions with the Labour shadow team and in campaigning up and down the land.

So far 17 MPs have pledged to support this great new initiative pledge (latest).

It is based on the NHS Reinstatement Bill – read more here.

And the arguments behind the We Own It-initiated 5-point pledge, laid out the day before the crucial debate (here) are so  important.

Please take the #NHSTakeback pledge to your MPs of all parties and build on the momentum from Labour Conference’s strong stand.