This week it was announced that the Secretary of State for Health and Social Care has approved £196.5 million of capital funding for reconfiguration plans of hospital and community services in Huddersfield. On the surface this may look like good news but the truth is much more dangerous. The funding injection gives the go ahead to the disastrous decision by Government endorsing the end of acute and emergency care services in Huddersfield.

Keep Our NHS Public and our allies will all we can to support the Hands Off HRI campaign in continuing it’s struggle to oppose the decimation of it’s services. 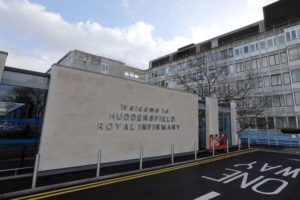 The CCG and Partnership plans amount to a total disaster for service users in the area. The reality is that the Department of Health is continuing to back the original plan in different clothes to end Huddersfield Royal Infirmary (HRI) acute services.

Despite the announcement that plans would retain a small A&E at Huddersfield, it could not take blue light ambulance at HRI, could not admit no acutely ill adults or children and could not manage maternity emergencies – a midwife-led-only service, with no maternity medical team (obstetrics) on site, would deal with small numbers of pregnant women deemed ‘not at risk’ – even though most emergencies are not known to be at risk till they happen – this is not safe, not fair.

Huddersfield RI would be an A&E hospital in nothing but name. No longer would it have a fully functioning accident and emergency service. It would be left with a glorified urgent care centre and nothing more.

Despite the cash injection for the reconfiguration plans this will be is a hospital DESTROYED.

The decision by the Secretary of State is welcome news on the back of our recent CQC rating of ‘Good’. This takes the Trust and our partners a step closer to improving the overall quality of care provided to local people. This forms part of our ongoing work with our local CCG Partners. Given that this involves substantial amounts of public money there will be several stages still to work through with our regulators and the Department of Health and Social Care as we develop the plans in more detail. We will continue to work with local people, staff, partners, Scrutiny and campaign groups to ensure that we create the next steps together.

However the Hands Off HRI campaign shot back with an immediate response which replied, 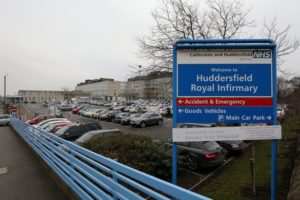 The Trust has now confirmed their intent to use government funding to transfer all acute and emergency care to Halifax. Hands Off HRI is demanding that the 2017 Final Business Case, which originally planned to close our A & E and HRI, is completely withdrawn.  It is clearly now dead in the water.

The allocation of £196.5 million from the government is to carry out the Trust’s furtive plan to transfer all acute and emergency treatment to Halifax, which will be opposed by our campaign.  It is time for the Trust to come out into the open and be honest about its proposals.  They MUST begin a full and open public consultation about the next steps for health provision in Huddersfield.

Experience has taught us we just can’t trust these hospital bosses to be straight with the people of Huddersfield and Halifax. They claim to be saving A & E, but in reality, we would be left with a walk-in centre and a hospital dealing with rehabilitation and non-urgent care. Everything else will be transferred along the Elland By Pass to Halifax, with all the huge problems that will cause. Our fight will go one including and up to a further legal challenge if that is what it takes.

Keep Our NHS Public is acutely aware from our branches of the inherent dangers of longer journey times to hospitals and we stand shoulder to shoulder with this campaign and its commitment to patient safety.

Despite the funding smokescreen local hospital bosses have got their way and will press on with the unpopular plan to downgrade Huddersfield’s A&E. 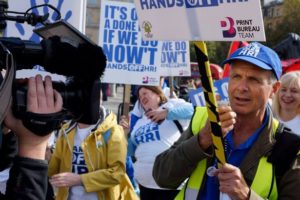 Campaigners have had amazing success in halting the original demolition plans for HRI but now must stand firm and redouble their efforts to stopping the downgrading of their A&E department.

Campaigners have vowed to continue to fight the proposal in a bid to keep a “full A&E” in Huddersfield,  and Hands Off HRI says it is now very likely to carry out its threat of taking the trust to court.

In this and in all it’s work, Keep Our NHS Public offers its support and solidarity.