This July Newsletter, has news on the monster petition that has over half a million signatures and grown our campaign, Ken Loach confirms he'll be speaking at our Mental Health Crisis Summit and an important contribution on reproductive rights. 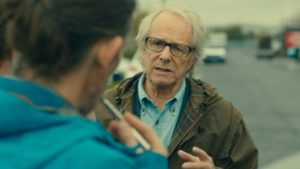 Keep Our NHS Public is very pleased to announce that Ken Loach will be speaking at our Mental Health Crisis Summit 2019 on Saturday 28th September. BOOK HERE

This summit aims to raise awareness about the extent of the mental health crisis. The summit will explore what a well-supported public NHS should provide and what the political responses should be to the crisis it faces.

We will embrace the Social Model of care and more outpatient care, early intervention and preventative strategies. It will explain that only through political campaigning and political change can we truly stop the crisis and for society to address the mental wellbeing of the people in this country.

It is the aim of the Summit to explain how the crisis is created by this Government’s policy decisions, which are driven by a commitment to neo-liberal and racist ideas. Austerity has now been policy for nearly a decade. Its slash and burn approach to the welfare state has cut not just mental health services, but school funding, local council budgets, social housing, social services, community centres, libraries, youth clubs and of course the NHS itself. The impact on mental health and indeed life expectancy for hundreds of thousands of people in Britain has been devastating.

The ‘Hostile Environment’ too has fostered an increase in racism in society, and the persecution of migrants. This has meant that we have seen a massive increase in the mental ill-health of many people within BME communities. Added to which there is the brutal DWP regime, universal credit, frozen pay and attempts to undermine trade unions. It is our belief that these are the root causes of the mental health crisis.

The funding injection into mental health services from the Government earlier this year, the appointment of a ‘Suicide Prevention Minister’ and Theresa May’s recent statement that more should be done to train teachers to spot mental ill-health and online bullying, whilst welcome, are far too little far too late. HCT, working with campaigners in mental health and with the TUC and health unions, need to build a powerful campaign capable of challenging Government policy, forcing it to roll back austerity, end the ‘Hostile Environment’, and properly fund and staff the NHS. We need to secure its future as a publicly run and publicly owned service, free at the point of use and accessible to those who need it.

It is our aim that our attendees leave the summit with the necessary arguments, facts and campaigning strategies to build a movement that can help to bring an end to the mental health crisis.

Keep our NHS out of US Trade deals 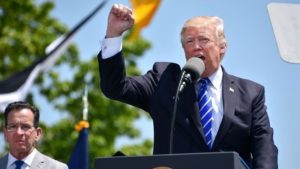 As part of his visit to the UK, Donald Trump initially asserted the NHS must be on the table as part of any trade deal with the UK after Brexit. This is a serious and direct threat to the NHS that we all know and love - so Keep Our NHS Public called on our government to guarantee that our health service will never form part of ANY trade deal, never mind one with Donald Trump! As we know he backtracked - but we still want our guarantee from the Conservatives on this that, our NHS is a vital public service, it must remain protected from commercial exploitation.

Opening up the NHS to US corporations would mean that the profit motive invades our NHS, patient data is up for sale, access to healthcare is rationed and we would be staring at a system, as in the USA, where if you can’t pay you don’t get care.

Decent healthcare is a human right and should never be a commodity to be bought and sold. Our petition to Donald Trump to keep his hands off our NHS and asking the UK government to explicitly guarantee that it will never form part any trade deal, has now reached over HALF A MILLION signatures. Let's keep signing and make this a strong message that the Government cannot ignore.

Government response provides no guarantees over the NHS and future trade deals, YET 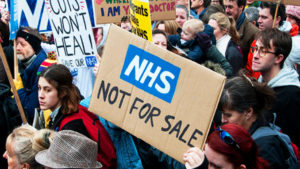 Yesterday the department of international trade responded to a petition entitled ‘Don’t put our NHS up for negotiation – Please introduce concrete safeguards that will make sure our NHS is kept out of any future trade deals after Brexit’ with a statement designed to allay the public’s fears, but the devil is in the detail. In reality this government response offers no real guarantees, no clarification and consequently no assurance that the NHS will indeed be ‘off the table’ when it comes to forming future alliances after Brexit. Their statement reads as follows:

“The Government has been consistently clear about its commitment to the guiding principles of the NHS – that it is universal and free at the point of need. Our position is definitive: the NHS is not, and never will be, for sale to the private sector, whether overseas or domestic. The Government will ensure no trade agreements will ever be able to alter these fundamental facts.”

The NHS being ‘free at the point of need’ obscures the fact that private agencies may well be providing the care given. Upfront charging is only one version of privatisation. Outsourcing NHS services to private providers is another wasteful and inefficient path. There are more factors to consider such as quality and reliability of service provision. 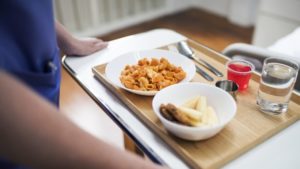 The Good Food Chain, the company at the heart of the listeria-contaminated sandwich scandal that caused the death of patients, has gone into liquidation. But the story does not end here. They were only a symptom of the dangers currently inherent in NHS food provision.

The Good Food Chain had been found by the Foods Standard Agency to not be the source of the listeria. It seems it originated with their supplier of cooked chicken, Northern Country Quality Foods. The Good Food Chain were given the all clear to resume production. But they faced a problem. They had to reapply for NHS accreditation. Given most of their business was with the NHS, the 43 NHS Trusts they supplied with cold meals, sandwiches and salads, they seemingly could not afford to wait around for that to happen.

In light of wider attacks on reproductive rights, Hunt’s views can’t be ignored

Abortion care is healthcare. It is central to women’s health and bodily autonomy and restricting access to it harms women. This shouldn’t need stating. We thought that progress had been made, especially when Ireland voted to legalise abortion last summer. But recent events in America have shown how quickly these hard fought changes can be lost.

Last weekend, Jeremy Hunt, who is one of the candidates to be our next prime minister, publicly stated that he is in favour of restricting women’s access to abortion. Within the wider attack on reproductive rights across the world, this is concerning and cannot be ignored.

Hunt stated that he believes that the time limits on abortion should be reduced from 24 weeks to 12 weeks. He said this is a matter of “personal conscience” and that he wouldn’t seek to make any changes if he became prime minister. The comments have been widely criticised, coming as they do at a time when the government is under pressure to give women in Northern Ireland access to abortion.

Following a survey of members in which activists said they would like some guidance on how to achieve KONP's aims using the 'Political Process', Terry Tallis and I began to write short articles for the KONP Newsletter on this arena for struggle.  This one is about Using Council Scrutiny Committees. If you'd like either of the previous sets of guidance on the Political Process, please get in touch and I'll send them to you. KONP is non Party political but clearly heavily involved in politics - that is, we want to shift the power balance towards fully reinstating Our NHS.

Councils have Scrutiny Committees, made up of Elected Councillors. They are dominated by whichever Party has control of the Council, usually Labour,  Conservative or Lib Dem, sometimes 'no overall control'. The Chair, and his or her officers, usually arranges meetings in public where the public can watch but not speak. However, it is usually the case that members of the public can submit questions in advance.

To find your own local arrangements, get in touch with your Local GovernmentOfficer, who is Duty Bound to explain to you in full how Scrutiny works, when itmeets, who is on the Committee and the deadline for Questions.

In Derbyshire we have a Conservative Party led Scrutiny (with Labour and Lib Dems. also on the Committee) and they have allowed campaigners to ask Scrutiny to ask the the County/Footprint NHS Commissioners (the CCG) to answer questions about the cuts in services. Every month, the CCG CEO is expected to attend and answer questions, put by Scrutiny chair but sometimes written by us lot - the campaigners. We've persuaded Derbyshire Scrutiny to have the details of the cuts exposed and laid bare.

Why is this worth doing? Firstly, unlike CCG Quangos, Councillors are ELECTED and we know that if we put pressure on them directly, or through Scrutiny, there is a possibility they may lose their seat, when an election comes.

Secondly, by attending - and maybe Lobbying, Scrutiny is a rallying point and produces more information. Maybe perhaps, Scrutiny might get the CCG to demand that the budget and related proposals are sent back to the Secretary of State.

I'd be interested to hear about the outcomes where others have done this across  the country. Contact Keith Venables - [email protected]