The country is on the verge of a constitutional crisis. The prospect of a no-deal Brexit looms large and either Boris Johnson or Jeremy Hunt will be the one to lead us through the storm. There is every reason to be deeply concerned at this prospect, and to fear the worst for the future of our NHS.

Neither man has endeared himself to the national health service and its supporters. Boris Johnson and his infamous big red bus proclaiming to give £350m a week to the NHS upon leaving the European union has long since been discredited, his pathological lying clear for all to see. He may be the bookies favourite to lead the country, but he cannot be trusted with the NHS.

In a piece published in 1995 for The Spectator, Boris Johnson wrote:

There is a moral point. If NHS services continue to be free in this way, they will continue to be abused like any free service. If people have to pay for them, they will value them more. Above all, there is an economic point. In a very modest way, this extension of private funds into the NHS would help the Chancellor’s straitenedcircumstances.

This comment does not bode well for his intentions if he is selected as the next Prime Minister, but nor do similar words written from Jeremy Hunt. In 2005 Hunt co-authored Direct Democracy: An Agenda for a New Model Party, a policy book containing writings from various Conservative MPs in which was stated:

Our ambition should be to break down the barriers between public and private provision, in effect denationalising the provision of health care in Britain 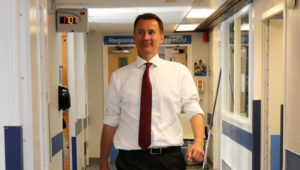 Both men, although making pains to backtrack from these deeply unpopular opinions, would like to see a future in which at least some people had to pay for healthcare in this country.

During his leadership campaign Hunt has publicly advocated for a social care insurance system, and it’s pretty clear where else that ideology could lead.

Johnson was recently recorded at a meeting of his supporters saying the NHS needs reform:

This should ring alarm bells as so-called reform has historically brought with it damaging interventions which have undermined the service’s founding principles – most notably the health and social care act 2012 which introduced the internal market into the NHS: 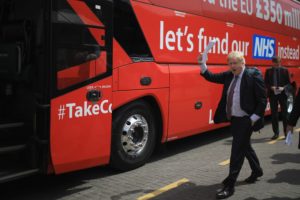 The idea that in reality most of the NHS’s problems would be solved through organisational reform has been used repeatedly as a distraction and an excuse to somehow justify or negate the need for increased funding. Hunt helped push through damaging reforms introduced by previous health secretary Andrew Lansley and later sought to make some of his own by enforcing an unsafe working contract on junior doctors causing the first all-out strike in history in the process.

Hunt has said as part of his campaign that he is a good negotiator (skills he would need in abundance for the challenges ahead) yet during the junior doctors’ strike in 2016 he point-blank refused to sit down with them for talks, even on one occasion allegedly hiding behind a tree to avoid their difficult questions.

In a recent meeting with his supporters Johnson appeared to at least acknowledge that more funds were needed for the NHS saying “It needs more money” though neither man has a specific plan to increase funding to the required levels.

A poll last April conducted by the British Social Attitudes (BSA) survey concluded that 61% of respondents would be prepared to pay more in tax to bolster the health service. Yet, both leadership candidates have plans to drastically reduce the amount the treasury recoups in taxes. This populist signalling, directed at their party membership - will further disadvantage public services at a time when they have seen nearly a decade of cuts.

Jeremy Hunt would implement a massive £13bn corporation tax cut by slashing the rate from 19% to 12.5%. The rate has already been lowered from 28% since the Conservatives came to office. Some of the money would be recovered in the long term through higher investment, but IFS experts say the Treasury will always be worse off.

Boris Johnson has pledged a huge tax cut for high earners - by moving the threshold at which 40% Income Tax kicks in from £50,000 to £80,000 a year. Experts said it would cost £9bn and help the richest 10%. He later said he'd prioritise tax cuts for the lowest paid, starting with a raise to what people can earn before paying National Insurance. Regardless of the direction his policy may eventually take, lowering taxes when the health service is already grossly underfunded will only add to the now year-round NHS crisis.

Johnson has also pledged to ‘fix’ the NHS pension crisis. The highest earners are refusing to work overtime for fear of being hit with huge tax bills. This is certainly an area that requires urgent attention, but Mr. Johnson has given no details on how he will tackle the problem.

Regardless of who Conservative members elect on 23rdof July, their choice won’t be representative of the majority of the British public, many of whom believe that there is little to choose between the two men and haven’t much time for either of them.

The NHS is headed for yet another turbulent time. The arguments against Hunt having the NHS's best interests at heart have been made by Keep Our NHS Public again and again. If however, Boris Johnson, the favourite to succeed, does what it appears he plans to do in cosying up to Donald Trump it may mean, despite huge opposition (see our huge petition here) that the NHS is sold down the river in a trade deal with America. There is every reason to be very wary indeed. All the more reason to keep building campaigns to show that there is another way, and the will of the majority to make it so.

If you're not already a member - join Keep Our NHS Public today.