With an inexpressible amount of thanks to our IT volunteer, Geoff, it’s our pleasure to announce that our new and improved national website is now up and running.

Tell us what you think!

We’d like to dedicate more space to covering and promoting local groups’ campaigning efforts and successes. To all our members and local groups please let us know what you’re doing and we’ll make sure to put it on the website. Please send details of your activities, pictures and notifications to [email protected].

Both the Guardian and the Independent have this month run stories drawing attention to cuts to the NHS. Both articles make particular reference to the secrecy the government have shrouded these cuts in and reference the BMA’s call for more transparency.

Amid scepticism from many working in the mental health sector, the government have announced a plan for better mental health services. The announcement detailed that 21,000 new posts were going to be created in order to treat 1 million more people by 2021. The newly announced plan seems to support Theresa May’s promise, 7 months ago, to tackle the ‘burning injustice of mental illness’. Scandalous neglect and deaths have shamed the government into taking some action.

Paul Farmer, Chief executive of mental health charity Mind has welcomed the proposed changes but also stated “A damaging lack of foresight in workforce planning in the past has led us to where we are now, with a significant gulf between what’s in place and what’s needed to deliver good quality care.”

6000 mental health and learning disability beds have been cut since 2010 and swingeing funding cuts in mental health and social care will not be corrected by this latest government decision.The Royal College of Nurses have stated that the new policy appears “not to add up”.

NHS Professionals provides a bank of 88,000 doctors, nurses and health professionals willing to work in hospitals and community services across the UK. It’s a big success, saving the NHS £77 million last year alone, by reducing the need for expensive private agency staff. Now, ironically, the government wants to privatise it by selling off a 75% stake. Please tell your MP to stop the sale of NHS Professionals.

On the 25th July KONP members from Islington, Lambeth and Save Lewisham Hospital Campaign accompanied members of We Own It in delivering their petition to keep NHS professionals public to the Department of Health, it had 16,400 signatures. Since then Labour has called for an enquiry into the government’s intended sell-off.

Swindon KONP have done a wonderful job raising awareness of the threat to our NHS through their celebrations of it’s 69th year.

The group featured in The Swindon Advertiser highlighting and denouncing the addition of a private ward at their local Great Western Hospital.

Co-founder Samantha Wathen gave a wonderful interview on BBC Wiltshire which you can listen to here (16 minutes in). As Samantha says we ‘can make a difference if we all join together’ in defence of the NHS. 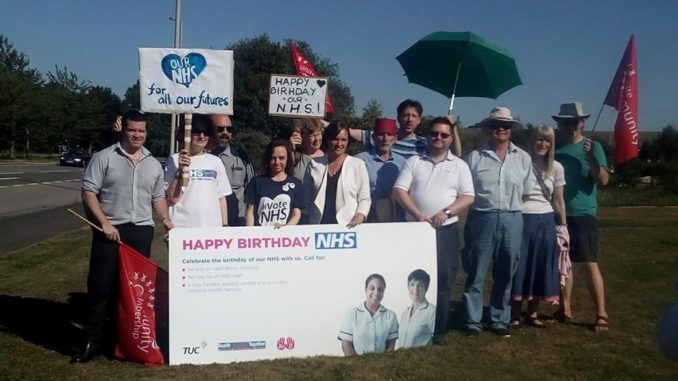 This month NHS Campaigners in Southend have seen a u-turn on proposed downgrading of Southend and Broomfield Hospitals’ A&Es. Norman Traub, of Southend KONP and Save Southend A&E campaign group was interviewed by Basildon, Canvey and Southend Echo.

The Echo also published a promise from local Conservative MP Sir David Ames stipulating that the A&E at Southend Hospital will ‘100% not be downgraded’. Campaigners will take heart from our ability to force even Conservative MPs to support the NHS or lose their seats next election.

This is a wonderful achievement – well done to Norman and all those campaigners in Southend who helped bring about this result! 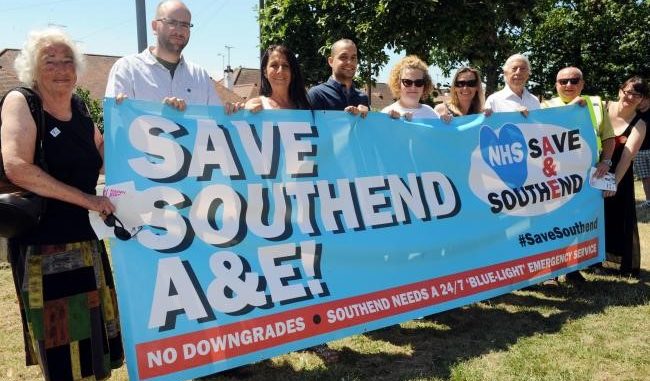 Local KONP groups – Save Lewisham Hospital Campaign, Lambeth and Greenwich KONP – working successfully with lead councillors in local authority health scrutiny, have won a major victory in South East London. Local NHS commissioners have abandoned their flagship STP proposal for a 2-site elective orthopaedic surgery super centralisation. They have given way to challenges to the process which was going to exclude elective surgery from Lewisham Hospital. They have agreed a 3-trust clinical network instead and this means elective orthopaedic surgery continues to thrive at Lewisham Hospital and community services. Lewisham Labour Councillor Alan Hall, tweeted about the achievement.

Huddersfield Hands Off HRI campaign has welcomed the decision to refer the plan to close the HRI’s A&E to the Secretary of State for Health (Jeremy Hunt) and the Independent Review Panel. There will be no news till after August. We wish the campaign all the best in its ongoing work. 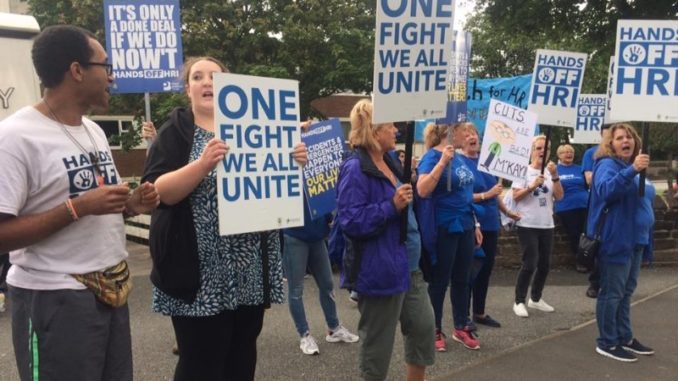 On Wednesday 6th September 12.30 – 14.30 you can join the RCN in urging the government to scrap the cap on nursing pay. The demonstration will be held in central London. Please head to the RCN website to register your interest or to find more details.

Save the date for a conference called by HCT to discuss:

Our NHS and Social Care in Crisis – Fighting back. End the freeze on NHS spending. Scrap the cap on NHS pay. No cuts or cash-driven closures. No privatisation. For a publicly funded and publicly provided NHS and social care. End the competitive market in health care.

We still have a few hundred editions of this quarter’s HCT paper, please email [email protected] if you are able (and would like) to pick some up from the London office for local distribution.

We need an extra campaign staff member urgently. All donations are so appreciated and help us coordinate our national effort to protect our NHS. Please visit our website to donate via paypal or email [email protected] to send a cheque or pay by BACs.