For most patients (and especially those who are suffering the effects of long waiting lists) whether the NHS or a private company delivers their eventual treatment will not be at the forefront of their mind. However, the increasing foothold of the private sector within the NHS is having a damaging effect on the quality of the service and its long-term future. The blame for this doesn’t lie with the patient for going private, but with the Conservative Government’s ongoing programme of defunding, outsourcing and austerity.

In 2012 the Conservative-led coalition government brought in the infamous Health and Social Care Act which revoked the private patient income cap, effectively allowing trusts to increase their private income from 2% to 49%, signalling a change that has rapidly exacerbated the amount of private work the NHS foundation trusts could do. But, as far as the patient is concerned, why does this matter?

It matters because the private sector slowly undermines the service in many insidious ways. One primary factor is the way it exploits and makes worse the massive 100,000 staff vacancy rate. The shocking shortage of trained staff is caused by numerous factors, including the pay cap that has driven many NHS workers from the profession. But the Health and Social Care Act 2012 has also enabled the private health providers to position themselves as more attractive employers than the NHS. The private sector is steadily poaching essential staff from the NHS and therefore putting even more pressure on an overstretched system.

According to analysis by the Health Foundation, the number of staff leaving the NHS has almost trebled in the past seven years. Many of those who left were nurses, but the number of doctors leaving has also increased by 169% since 2010, faced with unmanageable and unsafe working environments, stagnating wages and long and unsociable hours that do not allow for a work-life balance. It is unsurprising that doctors and nurses are emigrating, going part-time or working sessions or full-time for private companies. For many it is a case of doing this or leaving the health profession completely. Due to ongoing austerity and defunding, when staff leave the NHS, they are not replaced. The main reason patients are waiting so long for surgery or other treatments is due to a lack of staff - a lack of staff that is aggravated by the presence of private health firms in the job market.

Not only that, the Government is also consciously pushing patients, and feeding business, towards the private sector.

Owing to the need to meet government-imposed targets, NHS management (NHS England) has instructed NHS trusts to offer private operations and tests to patients on waiting lists.  Therefore, more and more funding is flowing to expanding private healthcare providers, quick to recognise what a lucrative commercial opportunity is now available to them. 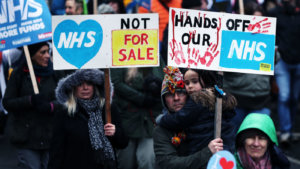 According to the Government’s own annual report (from the Department of Health and Social Care), in the last financial year the NHS commissioners spent £9.2bn on services contracted to private companies. BUT an additional £1.33bn was spent in 2018/19 alone (an increase of 106% over 5 years) by NHS trusts sending patients from their own NHS waiting lists to private facilities as hospitals continue to struggle with a lack of beds, long waiting lists and a general lack of capacity in the system.

The Government must take the responsibility for manufacturing this situation.

The Government is ideologically committed to expanding the private sector, and it is still committed to austerity (whatever Johnson and Cummings would have you believe). Even the recent funding promised for the NHS not only will not be enough to resolve the crisis it faces, but will increase the deficit against the need by a further 5% at least. Nor will the crisis of recruitment and retention be met overnight, regardless of new policy proposals.

I ask people to think carefully about the impact of prioritising themselves at a high cost to not only other people who do rely on the NHS, but to their future selves who may rely on the NHS one day because they have an accident or emergency, or become really quite unwell, or can no longer afford to pay privately ... I implore anyone who uses private healthcare to be aware that they are effectively privatising the NHS by doing so.

While the article rightly points to the undermining of the NHS by the growth of the private sector, it is NHS trusts themselves who are sending NHS waiting list patients to private units – not patients going of their own accord. Those who can afford it may make that personal decision to pay to go privately. In either case, long waiting lists are deliberately creating pressure to go privately via those two routes.

It must be stressed that it is the Government that has artificially creating this situation where people have no choice but to go private to avoid long waiting lists – they could change things if they wanted to. Blame is with Government policy and should not be laid at the patients’ door.

Increasingly it is not individuals paying for healthcare services that is funding the private sector, but ironically, the NHS itself. The vampires are not only bleeding the NHS dry – crucially they have been invited in to do it.

There are no quick-fix solutions, but it is crucial that NHS capacity is built to treat its own patients, that outsourced contracts are taken back in-house and the 49% clause is reversed so that trust resources are used for NHS patients. Retention of existing staff should be this government’s top priority. But this can only be done through safe staffing levels, valuing staff and improving their working conditions, ending privatisation and ultimately scrapping the Health and Social Care Act.