Controversy over NHS England’s decision to award Oxford University Hospital’s and South East London’s scanning and pathology services to private companies means we need to cut through the rhetoric and get some clarity on what NHS England is really all about.

NHS England (NHSE) came from the Conservative Government’s strategy for the NHS captured the now infamous Health and Social Care Act passed in 2012 and implemented from April 2013. NHS England was established as a vehicle to ‘reform’ (read undermine) the health service further away from its founding vision as a publicly owned, provided and accountable system. NHSE’s recent track record in awarding significant contracts to private companies in Oxford and London demonstrates an onoing commitment to the Act, which for example allows Foundation Trusts to generate up to 49% of their income from private health sources. 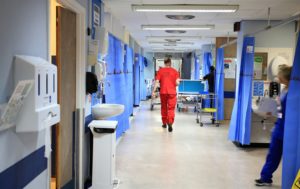 NHS England conveniently proclaims adherence to all the positive values and connotations that the NHS stands for. But as an institution its primary role has been to carry out government policy, the ideology for which is to strengthen market processes, commercial contracts and competition amongst NHS service providers, opened far and wide to private interest.

NHS England manages the budget allocation to the 200+ Clinical Commissioning Groups (CCGs) and oversees  the budget planning, delivery and day-to-day operation of the commissioning side of the health service. Through NHS Improvement (they are merging) it regulates NHS provider trusts.

“No privatisation on my watch”

NHSE and Conservative Cabinet Ministers are clearly aligned when it comes to privatisation of the NHS. Health Secretary Matt Hancock for one has never made a secret of his enthusiasm for private companies, controversially promoting Babylon’s GP at Hand and proudly declaring himself a user of its service. 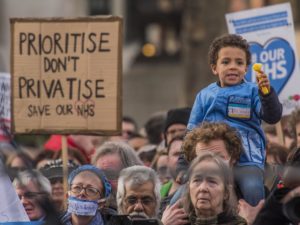 Government ministers with links to or an interest in private healthcare are numerous and while huge contracts are now frequently being awarded to non-NHS providers, it’s not hard to see that the conflict of interest is very real. David Oliver comments in the BMJ:

Employees, lobbyists, and consultants secure advisory or leadership roles in government bodies and then move back to the private sector. Meanwhile, senior government officials and former ministers take their inside knowledge and contacts to organisations and sectors that do regular business with government.

In this ‘post-truth’ era ministers publicly assert that the trend is not to privatise. Speaking in front of the Health and Social Care Committee in February, Hancock said:

I am going to be much more concrete. There is no privatisation of the NHS on my watch

Yet the amount of privatisation ‘on his watch’ has been staggering.

The Labour Party recently released data they obtained from the House of Commons Library showing 21 NHS contracts worth £127m are currently out to tender – and 19 of them have been put out since Hancock made the commitment.

Earlier this month NHS England threatened to sue Oxford University Hospitals for libel after staff there spoke out against the body’s decision to award their PET-CT cancer scanning service to private company InHealth. Clinicians said the process of removing their scanners and the staff trained to operate them would “undoubtedly cause clinical harm” 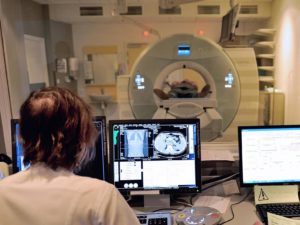 Lawyers for NHS England said the trust’s concerns (which were shared by doctors, MPs of all parties and cancer patients) amounted to defamation. The decision to remove the contract from the NHS will now be reviewed by the health secretary who could refer it to the Independent Review Panel (part of statutory appeal process).

There has been a partial U-turn in allowing OUH to retain the running of their own scanners, but the contract is still retained by InHealth and a new service will still be operated by private providers in Swindon and Milton Keynes. Pressure has been exerted from all sides, and Oxfordshire Keep Our NHS Public have played a part in the decision to partially reverse the decision. They say:

The proposed ‘partnership’ … is no such thing but [in reality] a proposed subcontract by InHealth to Oxford University Hospitals to deliver PET scan services, [and] appears to involve paying InHealth for doing precisely nothing on the Churchill site. This is totally corrupt. [In addition] the threats of legal action issued against clinicians if they voiced their fears for patients’ health should privatisation go ahead, were wrong. Legislation should be passed to outlaw such a practice.

Sadly, Oxford is not the only example of significant contracts being dished out to private providers. This is part of the push from NHS England and NHS Improvement to form national networks of specialist imaging. In South East London, Alliance Medical in private-public partnership with Kings, have taken on the specialist imaging contract. It is part of a larger, worrying trend, which campaigners must continue to monitor.

Also in South East London, three private providers have been shortlisted to deliver a contract for pathology services worth an eye-watering £2.25bn over 15 years, with no public consultation. Surely dealing with such a significant proportion of public money should warrant more transparency from NHS England, especially when the contract could extend to 20 years.

It reeks of a highly centralised, “we know best” top-down approach and seems to operate on the premise that the NHS is incapable of delivering services at scale. However, there is no evidence to support this and there is in fact evidence that private companies do not do it better.

A public consultation is currently underway on several changes to the law regarding the NHS, including whether to revoke section 75 of the Health and Social Care Act 2012 (with its regulations) which allows for enforced competitive tendering of clinical services. This is a step we support as it would lessen the chances of numerous smaller contracts going to private providers. We are using this platform to highlight the impact of damaging legislation more generally. It is clearly nowhere near the extent of change that NHS campaigners and Keep Our NHS Public are seeking.

NHSE may be pulling away from the chaos of the contracting of thousands of smaller/medium contracts but they are pushing towards fewer very high-value large contracts for pathology/imaging and - coming soon - the integrated care provider contracts.

We must continue to campaign against these contracts, which break up the continuity of care in the NHS.

You can write to NHS England (deadline 25 April) using the letter from We Own It: ‘Stop private companies suing the NHS’.

There is no sensible reason why campaigners who fought to prevent this Act ever going through would not support the scrapping of one of the most damaging sections of it that has led to the carve-up of the NHS through multiple contracts and a competitive market. Often CCGs argue that they have no choice but to go to tender, if s75 is revoked, they will not be able to argue that. But we go beyond the demand to end Section 75 regulations and call for an end to contracting and privatisation altogether, an end to the Health and Social Care Act and the reinstatement of the NHS as a wholly public service. We need to changes laid down in the NHS Bill 2017-19.

What are we fighting for?

There can be no better example of social justice in action than a publicly provided NHS. ... The reason the Tories imposed austerity on the NHS at the same time as the Health and Social Care Act 2012 was that they wanted to sap confidence in the NHS and make people believe that they needed to go private - increasingly this is happening as waiting lists grow and also trusts are outsourcing due to a lack of capacity.

Keep Our NHS Public’s overall aim is to reverse this damage: to restore our NHS back to publicly run, owned and accountable universal health service. This means an end to the deliberate contracting of clinical services; an end to NHSE policy of fragmenting the NHS into separately managed discrete contracted areas; and a return to a nationally coordinated public service. We want a comprehensive NHS offering preventative public health programmes, well-funded and staffed primary and hospital services. We want a universal service for everyone in each geographical area - inclusive of migrants, undocumented and all vulnerable people whether registered with a GP lists or not.

NHSE was originally set up as the vehicle to drive government policies to extend the market into the public health system. Far from seeking to support the original aims of the NHS as a publicly owned and provided service, NHSE is now overtly in favour of privatisation on a large scale, further undermining the founding vision of the NHS.

NHS England’s latest move threatening to sue one of its own hospital trusts for voicing informed concerns - and openly taking the side of the private company - signals a renewed commitment to privatisation and will do nothing to assure the public that NHSE actually has the needs of our NHS and its patients at heart.

Get involved with the NHSE consultation on Section 75. You can write to NHS England (deadline 25 April) using the letter from We Own It: ‘Stop private companies suing the NHS’.