The NHS crisis is bad for the health of its staff, it’s high time this government cared for its carers

Doctors, nurses and other NHS staff are viewed by many in society as almost superhuman, impervious to mental illness or indeed any illness at all. Yet it should be obvious that a worker who deals with life and death situations on a daily basis would be highly susceptible to mental health issues. When added to the current NHS crisis with its pressures of severe understaffing and scant resources, a dangerous working environment is created where those on both sides of the consulting room table can suffer.

The NHS offers world-class treatment to its patients, yet it is notoriously poor at looking after the health of its own employees. There is little support for staff and hardly any slack in the system to allow for time off sick. This background coupled with a prevailing culture of a reluctance to ask for help and the stigma surrounding mental illness generally, means that doctors, nurses and others often suffer burnout, depression and even suicide.

A recent study published in the JAMA Internal Medicine journal conducted by academics at the universities of Manchester, Keele, Leeds, Birmingham and Westminster found that doctors suffering burnout are twice as likely to make errors in diagnosing, prescribing and treating patients. The researchers analysed the responses of 43,000 doctors and found that preventable harmful medical errors occurred in one in 20 patients. The symptoms of burnout were particularly prevalent in recently qualified doctors.

It is clear that the mental health of doctors therefore has very serious implications for patient safety. A doctor exhausted through the pressures of an underfunded system will make mistakes, but it will sadly also be that individual whom is held accountable, and in effect scapegoated for the wider government failings of understaffing and NHS neglect.

Dr Maria Panagioti, from the University of Manchester, who led the study said;

We show conclusively that the provision of safe, high quality patient care is severely compromised when doctors are physically, emotionally and mentally exhausted…We urge NHS instructions to urgently rethink the environment in which doctors are often forced to work.

This study is not an isolated event. A recent General Medical Council survey of 52,000 junior doctors also found that one in four feels burnt out. It is testament to the ever-deepening crisis in our NHS that this problem is becoming increasingly common and it is not a sustainable situation for medic or patient.

Mental ill health and its accompanying consequences in doctors have undoubtedly been hugely exacerbated by the government’s treatment of the NHS over the last eight years. As well as the usual demands of the job there is now a year-round crisis in staffing with a clinical vacancy rate of 50,000, meaning a ‘normal’ shift will often involve doing the work of several and forgoing much needed breaks.

The huge staffing gaps across the NHS mean that doctors and nurses are now going far beyond the call of duty to keep our wards safe. Jobs that were never easy have become jobs that are near-on impossible, and it’s unsurprising – though terribly sad – to now hear about the high rates of burnout amongst medical professionals.

Adam has written about his experiences on the NHS frontline in This is going to hurt: Secret Diaries of a junior doctor. 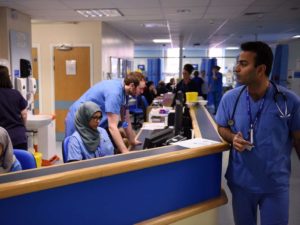 The NHS is sick, and its staff are leaving in droves. Some are choosing to migrate abroad to work in more attractive working environments. Others are moving to other less stressful professions or to the better paid private sector, and many are opting to retrain or take early retirement.

These figures are concerning but certainly not surprising for doctors working in understaffed and under-resourced hospitals across the country…What is most worrying, however, is the six-fold rise in those retiring early due to ill-health, clearly illustrating the effect these pressures are having on the physical and mental wellbeing of doctors, with many finding themselves at high risk of stress and burnout.

Doctors union the British Medical Association has now warned that the NHS needs to make a priority of tackling the staffing crisis that it says is putting doctors under pressure and to ensure that they are provided with better support.

A prime example of unsafe working practices has recently been demonstrated through the tragic death of Jack Adcock and subsequent scapegoating of Dr Bawa-Garba. When this becomes a daily and sustained situation it is not surprising that incidents of mental illness are increasing.

Between 2011-2015 the Office of National Statistics concluded that 430 doctors died by suicide. There has always existed a culture of silence in the profession and a reluctance to share with colleagues’ issues around mental health conditions. Mental illness is difficult for many to share but with Doctor’s the worry is that acknowledging a problem somehow undermines their competence to practice. These stresses mean doctors are at least twice as likely to end their life as the general population.

In 2008 the Practitioner Health Programme (PHP) was established by NHS England which offers mental health support to doctors in the NHS. However, currently only those in London may anonymously self-refer and this imbalance should be corrected to alleviate the concerns medics have over their condition being revealed to colleagues.

A recent survey found that two in five GPs have suffered mental ill health, including depression, anxiety, bipolar and post-traumatic stress disorders. In 2017 Pulse revealed that one in nine GPs has turned to alcohol because of work pressures, while 6% have turned to prescription drugs. GPs day to day work occurs in relative isolation and due to a shortage of 5000 GPs, handling a large caseload and working very long hours is now the norm.

Although the PHP was established by a government body, the discrepancies in its operation and the fact that certain facets of its setup were only introduced after lobbying from doctors themselves is disappointing and speaks volumes about the commitment from this government towards some of its most talented and hard-working employees.

A good government cares for its workforce, not creates an ever-deepening crisis whilst leaving them to fend for themselves, abandoning them when the going gets tough, and ultimately scapegoating them by leaving them to take the fall for government mismanagement. 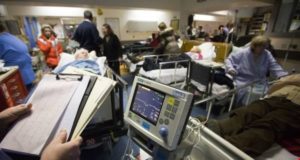 With another ‘winter crisis’ seemingly inevitable and chaos in NHS increasingly normalised, the government must acknowledge the challenges and support its frontline workers better in order to alleviate the pressure and end this destructive and damaging cycle of stress, burnout, sickness and poor performance.

Health Secretary Matt Hancock maintains he will champion the rights of workers and that he understands the challenges working in today’s NHS brings but we have yet to see how he will react to this recent study and how seriously he will heed its obvious warnings.

The ethos of ‘Physician heal thyself’ has been the misplaced mantra for far too long. This harmful culture of silence and the fear of weakness over disclosing mental ill health amongst doctors must come to an end. In this case it is not the physician that should be administering treatment, but the government who must inject proper funding to significantly improve the working environment in order to alleviate pressures and ensure both patients and the workforce are healed far more productively.