‘I would love to be able to wave a magic wand and have PPE fall from the sky in large quantities’ says health secretary Hancock, in light of warnings that some trusts will completely run out of gowns in the coming days. Frontline medical staff, working around the clock to save lives, are being forced to wear reusable lab coats, long sleeved patient gowns, or plastic aprons instead of the recomended single use gowns. To justify this potentially life-threatening development, Public Health England have rewritten their guidelines which previously stipulated the need for the gowns.

Now staff are being asked to reuse PPE that has been designated by manufacturers to be used only once. The claim is that the World Health Organisation sanctions this move in their guidelines in ‘exceptional circumstances’. These exceptional circumstances would not have occurred had it not been for the Government’s catastrophic catalogue of failings. The fact that kit due to arrive from Turkey on Sunday has been further delayed is just the latest in a long line of blunders and broken promises.

Shortages of appropriate PPE have been criticised by unions and professional bodies, including Unite, Unison, the British Medical Association and the Royal College of Nurses. They have suggested nurses refuse to work should they not be given safe PPE. Over 50 medical professionals have died from the corona virus so far, the majority of whom have been from minority backgrounds.

In the light of these shortages, such action may well be necessary to save health workers’ lives and to put pressure on the Government to take the situation more seriously. A 24-hour helpline is provided for staff to report critical shortages, but this will obviously not assuage the need for actual equipment.

It has been clear from late January that urgent steps were needed to avoid unnecessary deaths. Instead there has been complacency extending as far as putting essential training to prepare key workers for a pandemic on hold for two years while the focus was on planning for a no-deal Brexit. Johnson’s failure to attend 5 cobra meetings in the run up to the crisis, his failure to take crucial steps outlined by scientists or to heed warnings by public health experts, has cost lives. Staff are having to make decisions they would never have had to consider prior to the crisis, including prioritising certain lives over others. This will no doubt result in a serious impact on mental health with long lasting consequences for already overstretched and undermined NHS mental health teams around the country.

Hancock’s suggestion that the UK shortage is due to global demand, his attempt to blame healthcare staff for not using PPE properly, and the refusal to acknowledge poor planning and lack of preparedness, is typical of the Government’s customary shirking of responsibility and denial of reality.

There has been another litany of incompetence around ventilators. The Government failed to procure extra machines when other EU members did, and only managed to put orders in in mid-March. The order specification as to whether long- or short-term ventilators were needed have been constantly revised, making the process unnecessarily drawn out. One email related to ventilator procurement is said to include a video tutorial relating to a ventilator that has been obsolete for years.

All this points to the incompetence of advisors and the Government’s seeming inability to take the situation seriously in good time. The Government’s obsession with the free market has left them completely incapable of responding to a crisis. Their ideological commitment to privatisation, commercialising and outsourcing of services have all drained essential funds away from the NHS at a time when the general public have needed it most.

While discussions around exit strategies and ending the lockdown seems to be Government priority, the focus needs to be on PPE, testing and keeping the population safe.

While the urgent call for mass testing for the virus remain essential, it has been given less importance due to the ongoing crisis surrounding PPE.

Testing is essential to allow the tracing of those who will have come into contact with the virus, to encourage isolation, to prevent further transmission and to allow lifesaving treatments where possible. It is also essential in our ability to truly understand the nature of the virus, its prevalence, and to allow adequate preparation of essential services.

‘What’s Going On? Stories from the frontline’ on Tuesday 21 April 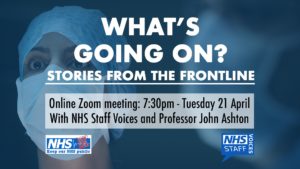