This Saturday 16th March, on UN Anti-Racism Day, there will be a national march against racism, islamophobia and anti-semitism meeting at Park Lane, London, at 12:00.

NHS staff, students and campaigners have organised an NHS Block on the demo and invite all NHS campaigners to march with them.

From Trump in the US, Tommy Robinson, Nigel Farage in the UK, Bolsonaro in Brazil and Le Pen in France to the AfD in Germany and the FPO in Austria, racists and fascists are moving off the political margins to centre stage. It’s now as important as ever to stand up to racism. 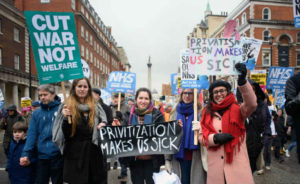 The Windrush scandal has shown the inhumanity of the Government’s ‘hostile environment’. Keep Our NHS Public has carried articles on the shocking treatment of Albert Thompson, who was refused cancer treatment, and much more.

Detention and deportations are destroying the lives of people that are part of the fabric of our society, and thousands of refugees remain stranded in Northern France. The threat is huge, but together we can turn the tide. This UN anti-racism day we need the biggest, broadest international display of opposition to racism and fascism we have ever seen.

On Saturday 16th March, join us to show that the anti-racist, anti-fascist majority is on the march and we will not stop until the rise of racism and the far right has been defeated. 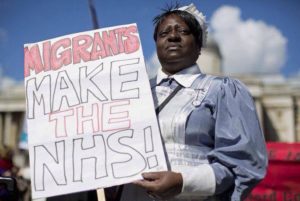 This year a group of healthcare workers and students felt it was important to have a healthcare section on this march.

They will be assembling at The Joy of Life Fountain on the Park Lane side of Hyde Park at 12:00. Work uniforms are encouraged!

One of the organisers told us:

Many of us will have seen the rise in racism, islamophobia and anti-semitism and the resultant morbidity and mortality among ourselves, our colleagues and/or our patients. Many of us will also be experiencing, navigating and/or witnessing the impact of an increasingly hostile environment in healthcare towards immigrants or those seen to be immigrants. We are seeing the introduction of poorly evidenced policies that impair our ability to provide appropriate care and preventative care and instead threaten individual and public health. We will also have seen the mistreatment of the Windrush generation, many of whom came to the UK to build the NHS.Whilst we may all have different views about why our NHS is struggling, the scapegoating of migrants and refugees will not solve the problems our NHS faces today. We are coming together to visibly show support for our colleagues and patients experiencing racism. We very much welcome health campaigners to join us!