Wednesday 23rd October marked two years since the introduction of upfront charging for care in the NHS, part of the ‘hostile environment’ policies that have been widely criticised by healthcare workers since their introduction into the NHS.

Campaign group Docs Not Cops blockaded the offices of NHS England for their role in passing patient data to credit check agencies to check their entitlement to care.

In the evening, healthcare workers and local campaign groups, including Keep Our NHS Public,  held vigils at 6 hospitals around the country to stand in solidarity with the people impacted by NHS charging.

Since the introduction of the policy in 2017, a number of people have died after being charged for care or denied treatment, as a result of their immigration status.

On 23rd October 2017, the Government made it a legal duty for NHS Trusts to charge up-front for treatment for people who are unable to prove their entitlement to free NHS care, and increased the chargeable amount to 150% of the cost of the treatment. This was a significant change in the way the NHS administered charging for care, and has increased the need for hospitals to check IDs and immigration status before providing care.

Today marks 2 years since the expansion of #HostileEnvironment and the introduction of upfront charging for migrants in our NHS. Denying people healthcare due to their inability to pay is inhumane. These polices have resulted in people with cancer dying in pain. Pregnant women unable to get maternity care. People dying from treatable illnesses cos they are too scared to see a doctor. We’ll never know the true number who have suffered & died as a result of these policies. We have been protesting outside NHSEngland as they have been mass sharing patient data with credit check firm Experian. These policies are not only inhumane, But as the Windrush scandal showed, Inherently racist, With people of colour or those with a ‘foreign’ names being denied healthcare.

Here are some pictures from Wednesday's events: 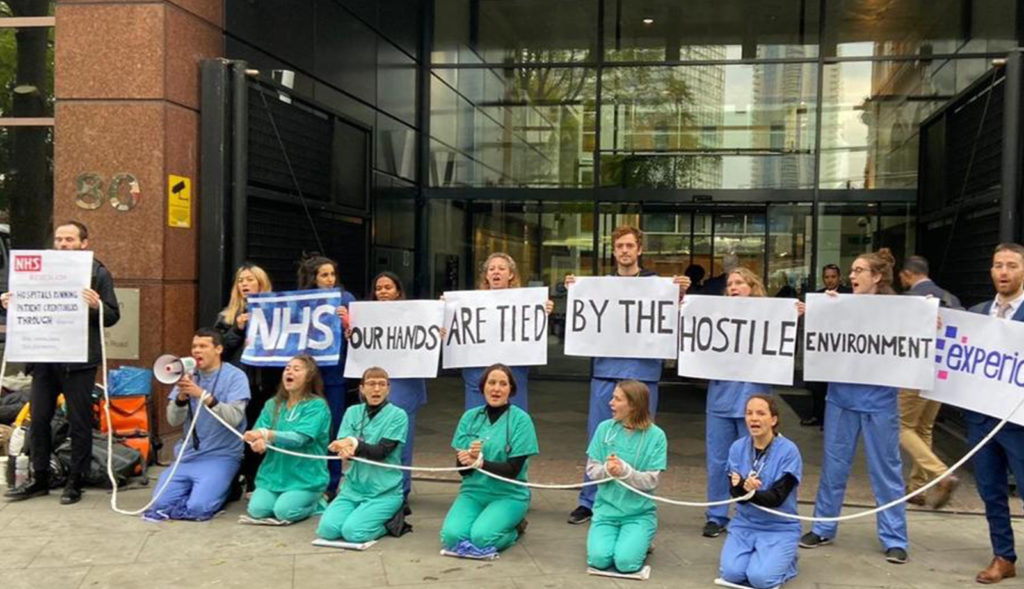 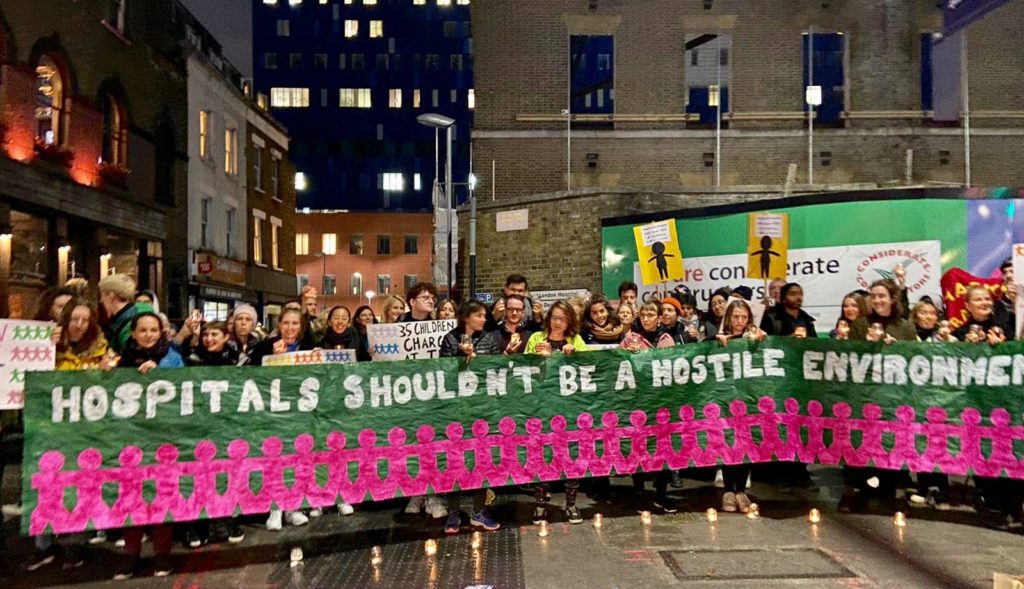 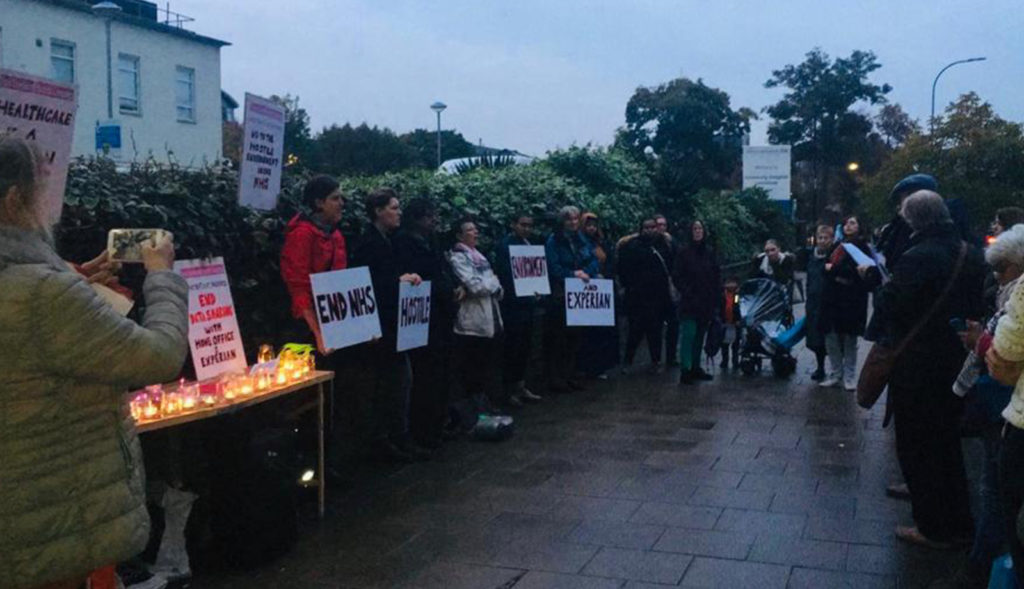 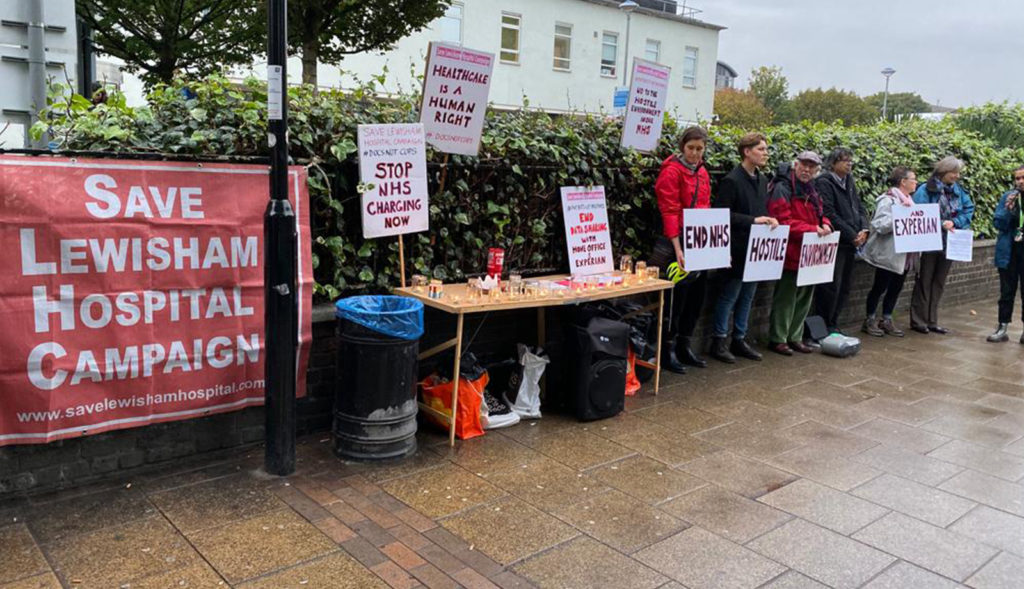 The impact has been wide ranging, impacting migrants, UK citizens, and groups of people supposed to be exempt from charging as evidenced by the Windrush Scandal, research by the Equality and Human Rights Commission, and the Government’s own review. The policy has faced harsh criticism from the healthcare community with members of the BMA overwhelmingly voting in favour of scrapping the policy and both the Academy of Medical Royal Colleges and the Royal College of Midwives calling for the policy to be suspended pending a formal review of the impact. Last week the charity Maternity Action launched a court case challenging the discriminatory impact of charging migrant women for care.

The Human Cost of Charging

Since the introduction of the charging policy, there have been many cases of people who have died as a result of delayed treatment or being denied care. In a number of cases, it was found that their treatment had been wrongly denied or charged.

“I started working in the NHS because I believed in its founding principles, that care should be given on the basis of need, not ability to pay – but the charging regulations brought in under the Hostile Environment have completely overturned that. It’s becoming increasingly impossible for me to care for and build trust with my patients when they know I might ask them to pay. The government must put an end to charges for care, and commit to the founding principles of the NHS: that it is a service free to all who need it.”

A Children’s Doctor who works at the Royal London Hospital, who asked to remain anonymous, said:

“As a children’s doctor, I know that having rapid access to healthcare saves lives. I’m furious that barriers are being put up which prevent my patients and their families seeking and receiving the care they need. If their birth was complicated, or the babies need intensive care, the cost very quickly goes into the hundreds of thousands – and parents only have three months to sort out the paperwork before they’re expected to pay. I’m demonstrating at the Royal London today because it was revealed that 35 children were charged here in 2018/19for their healthcare.”

Aliya Yule – an organiser at Migrants Organise, who are co-hosting the vigils, said:

“The introduction of charging for migrants has meant that many people are scared to seek the care they need. They are fearful of healthcare providers reporting them to the Home Office and landing them with extortionate bills, rather than helping them when they are unwell. Everybody who cares for the NHS should be worried, as this is the start of a charging regime which will accelerate privatisation for everybody – this is why communities are fighting together against the policy and the Government’s attempt to divide our us by blaming migrants.”

James Skinner, Access to Healthcare campaigner at the charity Medact, who are also c-hosting the vigils, said:

“Our research has shown that not a single NHS Trust in the country in monitoring the impact of NHS charging policy. It’s inconceivable that the Department of Health and Social Care can force healthcare workers and NHS Hospitals to start charging people up-front without assessing how it will affect patient care, and when all the evidence we do have clearly demonstrates devastating harm.”

*The bulk of this article first appeared on the Docs Not Cops site. We highly recommend you check out their brilliant campaign work. For more info click here.