Yesterday's vote on the NHS shows the clear dividing line in Parliament between those that want to end privatisation and repeal the widely-criticised Health and Social Care Act 2012, and those who will dogmatically defend the right of businesses to make a profit from health care.

That the Conservatives voted against Labour's motion to protect our NHS, along with the DUP, will surprise very few; that the Liberal Democrats shamefully abstained will be a wake-up call for many.

Last week Jonathan Ashworth MP the Shadow Secretary of State for Health & Social Care tabled an amendment to the Queen's Speech on the NHS. It was a strong indictment of Johnson's Queen's Speech which was seen by many as nothing more than crass electioneering on the part of Boris Johnson, who's record on the NHS is nothing short of abysmal.

The amendment was as follows:

You can read more about the background to the amendment and Keep Our NHS Public's response to it here.

The original debate was timetabled for Monday afternoon. However due to Saturday’s debate on Johnson’s botched Brexit deal, a further Brexit debate was scheduled for Monday, leading to the postponement of the planned debate on the Health section of the Queen's speech. By the time it was debated yesterday, Wednesday 23 October, the amendment was being called instead, a 'motion of regret'.

Here you can watch Ashworth speaking for the motion in the House of Commons:

Sadly, Labour lost the vote to amend the Queen's speech and protect the NHS from further privatisation 282-310.

The motion was defeated by a margin of just 28 which is encouraging, with 281 Tory MPs, 19 Independent MPs (including 18 former Tories and former Labour MP John Woodcock), plus all 10 DUP MPs voting against. No surprises there.

However, Jo Swinson and the Liberal Democrats refused to support the motion to bring an end to the widely-despised privatisation of NHS services, causing a furious backlash online. All Lib Dem MPs abstained from the vote, as did 8 rebel Labour MPs.

The votes for the motion of regret breakdown in detail is,

Expressing his disappointment after the vote, leader of the Labour Party Jeremy Corbyn tweeted, 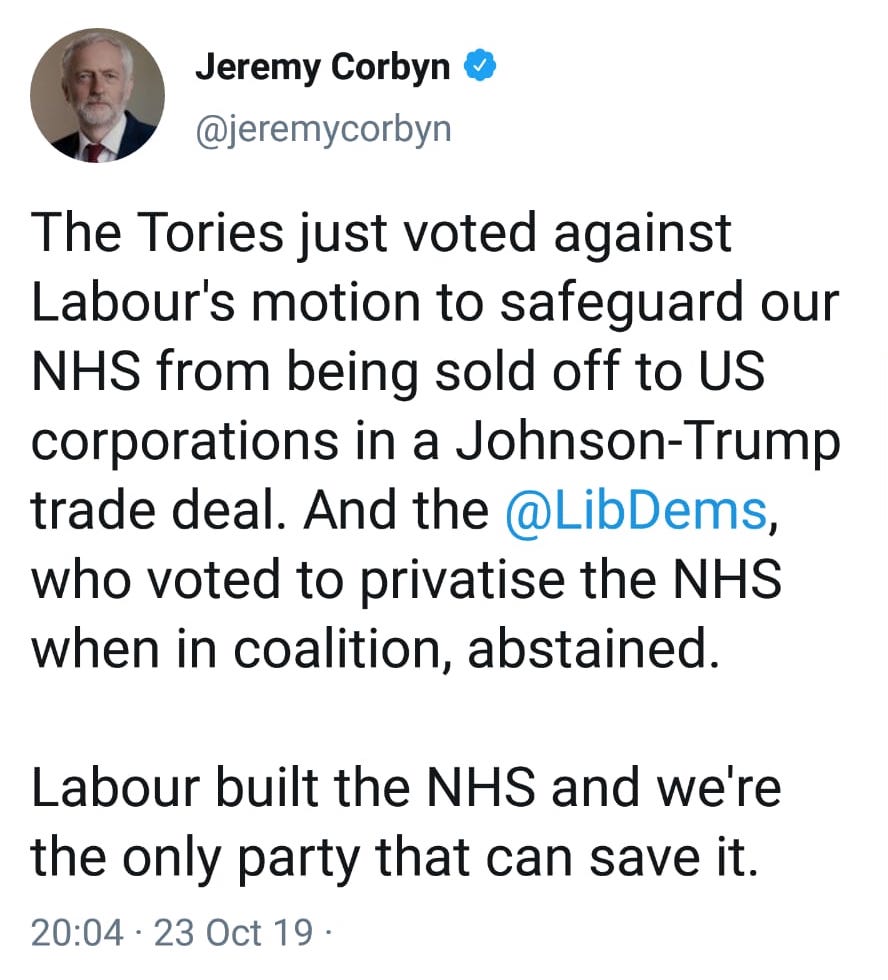 One woman tweeted when she saw the news of the vote,

×OMG I was considering voting libDems in the coming election but now I won't. Thanks keepnhspublic for informing me. I am voting for the party that protect NHS, state education

Editor of the Liberal Democrat Voice, an online Lib Dem Blog Caron Lindsay, tried to explain away the backlash,

Now I know that many, including me, in this party had concerns about the reforms in the 2012 Act. But there was some good stuff in there, on social care and on mental health, both issues very important to us. So even if we think that the Act isn’t perfect, we would go with amending rather than appealing it. So we didn’t vote for the amendment. We didn’t vote against it either. We abstained.

This response will be seen by some campaigners as a clear indication of the Liberal Democrat's attitude toward NHS privatisation. And it doesn't look good. Others will be hoping that the Liberal Democrats turn around on this one, as many believe that only the repeal of the Health and Social Care Act and a firm commitment to end privatisation can save the NHS from the steady decline we've witnessed since 2010.

Tony O'Sullivan, Co-Chair of Keep Our NHS Public responded to the vote by saying,

We welcomed the motion of regret as a commitment from Labour’s team to end privatisation - to reunify the NHS as a public service. The endorsement by the SNP, Green and Plaid Cymru parties for this position is extremely heartening, proving the NHS still has broad cross-party support.

The repeated failure of the LibDems to stand up for our NHS however - in the end they abstained - is shameful. While we face the potential of disastrous trade deals with Donald Trump's administration, and an uncertain general election ahead, KONP’s work to highlight the critical importance of health and social care has never been more relevant and urgent.

Ellen Lees, from We Own It said,

Parliament had the opportunity to signal its intent to end disastrous privatisation and protect our NHS from trade deals. We're incredibly disappointed that they didn't take that chance, despite the best efforts of Labour, the SNP, Greens, Plaid Cymru and the Independent Group for Change.
What the vote has shown us is who in parliament will protect our NHS and who will not. We'll be making clear to the public which side MPs have picked ahead of an election.

This clear divide, between those who will support our NHS and those who can no longer hide their desire to fully privatise the service, is now clear as day. Keep Our NHS Public will not rest until Government takes the necessary steps to defend it from corporate take over.
---
If you want to get involved with KONP and support our work, you can do so here.