Huge victory for local campaigners as plans to close Charing Cross Hospital and further downgrade Ealing Hospital have been stopped.

On Monday 26 March, Health Secretary Matt Hancock announced that the proposed plan, ‘Shaping a Healthier Future’ in NW London, which has been opposed by campaigners for the last 7 years has been halted. 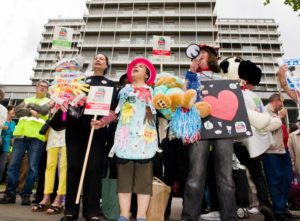 It has however, not been a bloodless fight. Ealing Hospital has suffered cruel and heartless cuts, with its children’s A&E, its maternity ward, and urology departments all shut down. In what will justifiably be seen as a victory for NHS campaigners, Matt Hancock said that NHS England ‘no longer supports’ the plan. 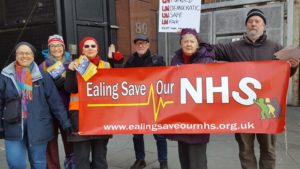 It has however, not been a bloodless fight. Ealing Hospital has suffered cruel and heartless cuts, with its children’s A&E, its maternity ward, and urology departments all shut down. In what will justifiably be seen as a victory for NHS campaigners, Matt Hancock said that NHS England ‘no longer supports’ the plan.

Labour MP for Hammersmith, Andy Slaughter had this to say,

This is a moment for health campaigners to celebrate but also to remember that millions of pounds have been wasted, many cuts and closures have gone through, not to mention the 7 years of uncertainty for residents. It means that now is not a time to roll up banners, dismantle placards or disband local campaigns. 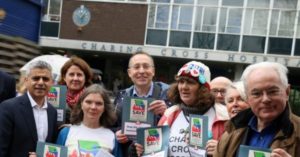 We must remain vigilant and build on our successes; Our NHS is still under threat of more cuts and privatisation, as evidenced by the growing scandal around cancer treatment privatisation in Oxford. This victory should inspire us to increase our campaigning with the knowledge that we can and will win.

The service Charing Cross Hospital provides is crucial – and it’s future should never have been under threat. Today’s Government U-turn is testament to the tireless campaigning of Andy Slaughter MP and  Save Hammersmith & Fulham Hospitals, trade unions and local residents. #LoveOurNHS

The story has made national news too with the Guardian story led with,

Ministers have axed plans to demolish and sell off most of a west London hospital after a seven-year campaign against a “monstrous” shake-up of NHS care in the capital. The reprieve means that Charing Cross hospital in Fulham will not lose its A&E unit and hundreds of beds under a scheme to downgrade it to a “local” hospital and sell 87% of its site for housing.

And the BBC reported,

Ealing and Charing Cross Hospitals’ A&E units had been expected to close as part of a programme to overhaul health services. But Mr Hancock said the Department of Health had withdrawn its support for the scheme after seven years. Campaigners welcomed the move but said it should have come sooner. The local NHS group said it had already spent £43m on consultants alone for the £500m project, Shaping a Healthier Future (SaHF).

Save Our Hospitals Hammersmith and Fulham made the following announcement last night:

Today in parliament the Secretary of Health Matt Hancock announced that the closure plans for both Charing Cross and Ealing hospitals contained in the cuts & closures plan known as Shaping A Healthier Future have been withdrawn  We’ve won. Its not been easy taking on a well funded posse of spin doctors, management consultants and political ideologues but many thousands of people have done just that and after a 7 year fight we’ve stopped a closure plan that was downright dangerous. Everyone has done their bit whether that’s signing petitions, challenging bureaucrats in meetings, running street stalls , demonstrating, fundraising or delivering & displaying posters. Tonight we should feel really proud of ourselves and celebrate our collective achievement.

Of course there are still huge problems: The £30m primary & community cuts planned for H&F, the state of disrepair in our hospitals, on going understaffing & under resourcing coupled with the threat of privatisation by the likes of Babylon and Virgin. Some may have seen the laughable attempts of local conservative MPs and councillors to claim responsibility for a victory they have consistently done their best to sabotage  It’s also true that the government could change it’s mind and come back with new closure plans in the future.

So we’ll have to keep campaigning – we’ve proven today that campaigning works. But for tonight let’s just celebrate a victory won by lots of different people (including you) working together to Save Charing Cross Hospital.

Ealing Save Our NHS also released the following press statement:

Finally, the Government has admitted the horrible ‘Shaping a Healthier Future Plan’ (SAHF) is not workable!

Former NHS England chief executive Sir David Nicholson had called these plans “the most significant reconfiguration project in the country”. But since they first announced SAHF plans to cut nine major hospitals in North West London down to five, Ealing Save Our NHS has been campaigning against it side by side with many others including Save Our Hospitals Charing Cross and the Councils in Ealing and Hammersmith & Fulham. SAHF spent tens of millions of pounds of NHS cash on management consultants. All for nothing. Now Secretary of State for Health, Matt Hancock, has announced the Department of Health no longer supports it. Ealing Save Our NHS has distributed a quarter of a million leaflets, held protests, attended carnivals, organised parties, lobbies, petitions, car convoys and much more to spell out the truth. On the other side huge amounts of NHS money was spent on public relations staff and glossy leaflets to pretend that our health would mysteriously be improved if they closed A&E’s and hundreds of beds. It didn’t work.

So what will happen now? Ealing Save Our NHS will keep on campaigning. This disastrous SAHF plan has seen the closure of two local A&Es, Central Middlesex and Hammersmith, as well as the closure of Ealing A&E to children. As a direct consequence, waiting times for Type 1 urgent A&E visits increased greatly. Ealing Hospital’s excellent maternity department was also closed, forcing Ealing mothers to travel long distances and negatively effecting continuity of care for many.

But health bosses appear to have learned nothing and continue to defend the indefensible. Mark Easton, the head of the North West London Clinical Commissioning Groups, in announcing the death of SAHF has just made the mind-boggling claim that maternity care and emergency paediatric care have improved. This is certainly not the view of local parents whose local services have closed. Ealing Hospital remains seriously underfunded and in crisis. But at least there is a ray of sunshine, the horrible plan underlying all these cuts has gone and we can focus on calling for proper funding and restoration of local health services.

This is a very important victory for the people of Ealing and Hammersmith & Fulham. Campaigners must be proud of themselves for standing up for the NHS and their local communities for 7 long years – with integrity, skill and huge impact. Elections unseated the council backing closure of Charing Cross and the Ealing MP backing government attacks on the local NHS and public services. Campaigners won the local councils to their side and refused to give in to the irresponsible plans of ‘Shaping A Healthier Future’ in North West London. Well done and thank you. The battles are not over. We are with you in your fight to restore the damage done and win back maternity and children’s services in Ealing Hospital.

Save Our Hospitals H&F have announced a celebration outside Charring Cross Hospital at 3pm today (27/3/2019), get down if you can!

Keep Our NHS Public is proud of it’s record in fighting cuts, closures and privatisation, as this news clearly shows, our work can and does have a huge impact. If you want to get involved with the campaigns to save lives, livelihoods, communities and the public service we all value so much, join us today.