Whether Marie Antoinette actually did say 'Let them eat cake’ as the French masses starved in 1789 on the brink of the French Revolution is a moot point. Regardless of the veracity, it strikes us as believable because the disdain of the French aristocracy for the poor was very real.

The bodies have piled up

Boris Johnson has recently denied making the comment, but he is a consummate liar, so his denial doesn’t ring true, and many journalists, including ITV’s Robert Preston, refute Johnson’s recent claim.

It’s also true that this latest revelation hitting the frontpages is less to do with the shocking, and surprising nature of the statement (it is shocking but not surprising from Johnson), but mostly because of his ongoing spat with ex former chief adviser to the Prime Minister, Dominic Cummings, which leaves the imagination to run wild about all the things our Prime Minister might say when he’s in private. Regardless, Johnson’s disdain for the lives and livelihoods of the majority of Britons is a material fact, whatever he says or how he or anyone else feels about it.

What is the material fact, is that at the time of writing the UK has one of the worst death tolls per capita in the world (currently 14th despite being the 6th richest country and for a time the worst). And there is a long line of experts, campaigners and ordinary people with direct experience of the pandemic who can attest to the ways in which they saw the crisis being woefully mishandled.

Many of these voices can be heard in Keep Our NHS Public’s People’s Covid Inquiry, which is chaired by renowned human rights lawyer Michael Mansfield QC. He said in response to Johnson's statement,

Set alongside the PM's observations about the role of greed and capitalism, it is obvious why he does not intend to establish a judicial public inquiry any time soon.

Is compassion from our PM too much to hope for?

The comment is also deeply offensive and woefully insensitive.  Jo Goodman one of the founders of the Covid-19 Bereaved Families for Justice said,

Since June last year, we have been calling for an independent, judge-led statutory public inquiry. Between then and now we have written seven times to the Prime Minister asking him to start an inquiry and to meet bereaved families. He has refused on every occasion. At the same time, according to reports he was suggesting the Government should ‘let the bodies pile high in their thousands’.

These ‘bodies’ were our loved ones. Mothers and fathers, daughters and sons, brothers and sisters, grandparents, husbands, and wives. Those who have lost loved ones already have to cope with the lack of dignity many of their loved ones faced as they passed.

Is it too much to ask that the Prime Minister would be sympathetic and respectful to our loss? These callous comments will have caused untold hurt to hundreds of thousands of us across the whole of the country. This demonstrates exactly why an urgent inquiry is so vital, to understand the decisions, rationale and consideration in protecting our loved ones that the Government chose.

The campaign has set up a petition asking the Prime Minister to apologise:

They are asking for:

They have also taken to Twitter to post pictures of their lost loved ones, which are accompanied by the line, ‘not a body to be piled up’. 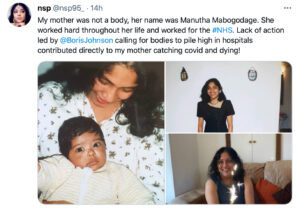 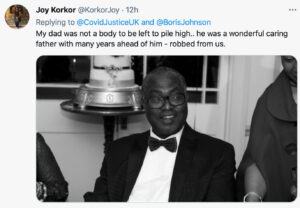 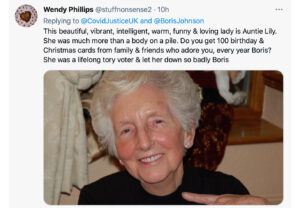 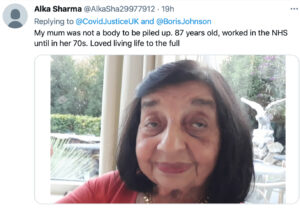 We also encourage you to visit their National COVID Memorial Wall, which now takes up nearly 500 meters of London’s Southbank.

For those of you who can’t get there, there is a powerful collection of images of the wall here. 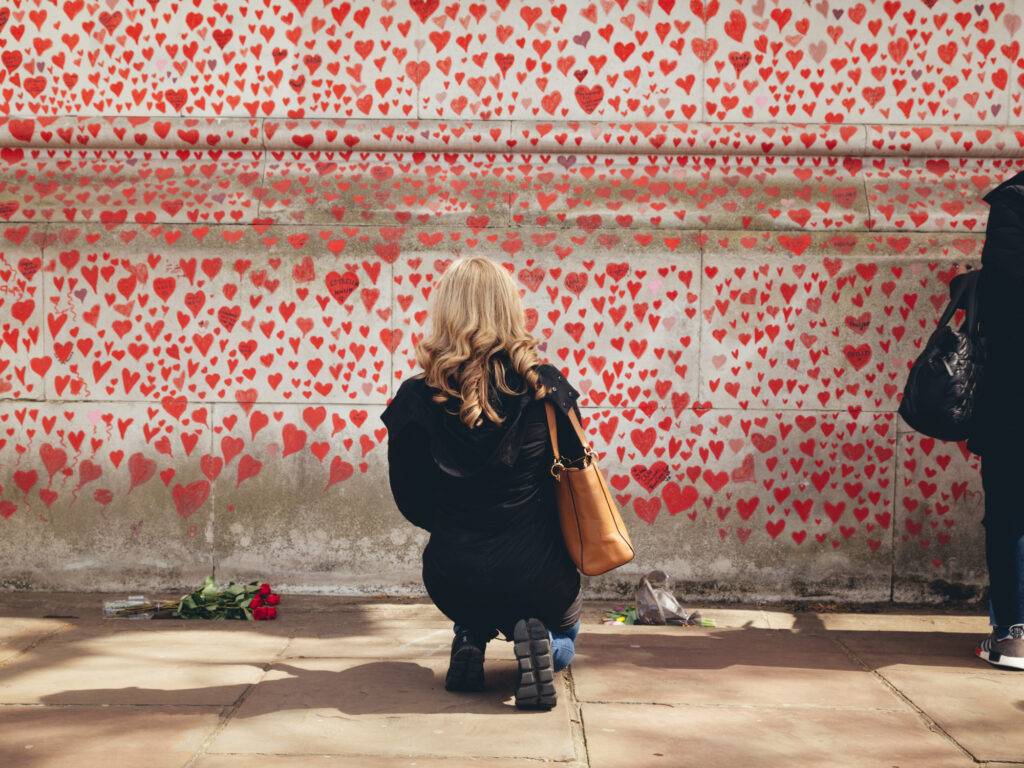 This makes the Government’s claim that the ‘people who would need to give evidence are working round clock’ as another excuse for not holding the inquiry seem even more pathetic.

Our People’s Covid Inquiry is also a platform for ordinary people and NHS workers to share their stories too. These frontline workers both in the NHS, our public transport sector social care workers, GP’s, teachers, volunteers running local community test and trace initiatives, and many more, are the ones who’ve been working around the clock to keep us safe and they too have given powerful testimony which you can watch here.

If you’d like to get involved with the People’s Covid Inquiry, register to watch the online sessions with our varied and powerful witnesses you can check out our website here. Now more than ever, we’re the only inquiry initiative working to ‘learn lessons and save lives now.’

Register for the next sessions here.