While the NHS is clearly under serious threat from commercial interests on both sides of the Atlantic, our huge petition – and the massive anti-Trump demonstrations which had concerns about the NHS at their heart – prove it’s the will of the people to defend it from attack.

Shockingly, Donald Trump had the effrontery to say that the NHS would be on ‘on the table’ in any future trade deals with the US ‘or a lot more than that’, while outgoing Prime Minister Theresa May stood by and facilitated the sorry scene at a press conference at Downing Street. He has since backtracked, saying: ‘I don’t see it being on the table’ while on Good Morning Britain the next morning. But we know that Donald Trump is not to be trusted on the NHS or indeed much else – he was revealing his true intentions for US corporations to further parasitise the NHS in England. 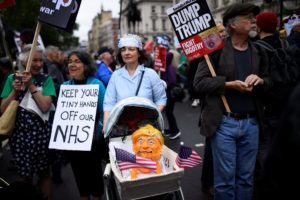 The huge and immediate backlash was perfectly encapsulated by the ‘Donald Trump: Hands Off Our NHS!’, Change.Org petition that was launched within hours by Keep Our NHS Public and KONP member Dr Sonia Adesara.

At the time of writing the petition has received 230,000 signatures in less than 24 hours. 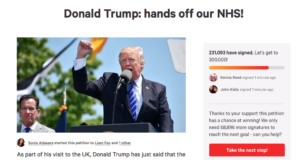 Dr Sonia Adesara, who started the petition on behalf of Keep Our NHS Public, said:

Our NHS is precious. We will not stand by and watch whilst this government dismantles and sells it off to US corporations. This country loves and cherishes our NHS, we will fight for it. I do not want to work in a healthcare system where patient care comes second to share-holder profits. The number of signatures on this petition shows how much this country loves and cherishes our NHS and it must be protected.

Don’t be fooled by Trump’s bully boy antics to disrupt and then pretend to backtrack: there is no way he’s taking the NHS ‘off the table’. He believes his own lies – like Farage. He will exploit the NHS unless we continue to shout about it. Trump, Farage and Liam Fox all want a fully commercialised NHS. Trump has previously said the NHS was “not working”, but the strength of feeling here by British people shows they clearly do not agree. We demand our government declares now that the NHS is a public service outside of all trade deals.

It’s a disgrace that our current government is sitting down with Trump in the first place, while 75,000 demonstrators gathered on the streets outside to say loud and clear that Trump was not welcome in the UK, including lots of people concerned about the NHS. 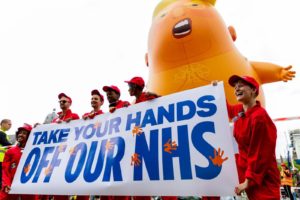 Many of the demonstrators carried placards and banners  warning Trump to keep his hands off our NHS.

Almost all of the speakers referenced Trump’s NHS ‘blunder’ in blurting out his true intent – those statements invariably received huge cheers from the big crowd that filled Whitehall, creating a deafening noise that all those in Downing Street will undoubtedly have heard.

The real reason Donald Trump is here is he wants a slice of our NHS and our NHS is not for sale.

We will not stand for that. We will fight with every last breath of our body to defend the principle of a healthcare system free at the point of need for everybody as a human right. They all need to understand: Our NHS is not for sale. 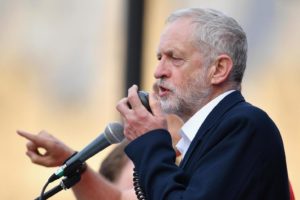 Many agreed that it was Corbyn’s best speech in a long time and it was largely because he put the NHS at its heart.

After a huge demonstration organised by Health Campaigns Together, The People’s Assembly Against Austerity and many others in February 2018, he tweeted:

Democrats are pushing for Universal HealthCare while thousands of people are marching in the UK because their U [Universal] system is going broke and not working. 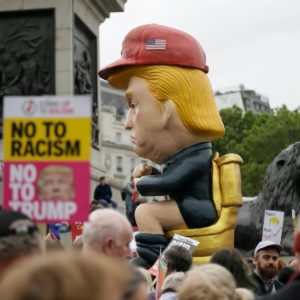 The problem was of course that our demonstration was about saving the NHS that we love from precisely the sort of private interests that Trump and the Conservatives represent. Yet more ‘fake news’ from Trump.

Of course we must remain absolutely clear that the main threat to our NHS comes from this Conservative government.  All it would take is for the Government to declare the NHS a public service not available for ‘general economic interest’ and our public NHS would be safe from commercial exploitation and trade deals.

While we’re obviously outraged that Trump thinks he can bargain with the NHS, and want him nowhere near it, it doesn’t change the fact that it’s 10 years of austerity (and privatisation) that have pushed it into repeated crisis. 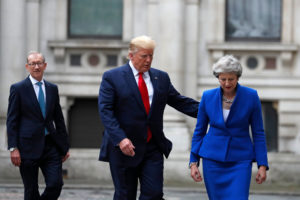 That Trump is the arch-privatiser – not to mention racist, misogynist, homophobe and war-monger – is one thing. That this government wants to sit down with him and discuss the NHS as part of a trade deal is another matter entirely.

That being the case, it still remains the best course of action in defence of the NHS to seek to replace this government with one that will safeguard our treasured NHS.

Jonathan Ashworth MP, Shadow Secretary for Health, made it very clear what Labour thought of Trump’s original statement and said:

I want to send a clear message to Donald Trump that our NHS is not for sale, and that under a Labour government it certainly will not be for sale.

We need to build the movements that can make the case for our NHS and make sure politicians listen to the will of the people. To help us do that and get involved we urge you to join Keep Our NHS Public today.

By joining us you’ll become part of a community of health campaigners with unparalleled experience and passion, will belong to a nationwide network of activists and have the support of a core team of experienced organisers at a national level. It’s easy and doesn’t cost the earth.