Sam Semoff has many years of campaigning behind him. As one of Keep Our NHS Public’s Merseyside group, he has fought tirelessly against cuts to services and privatisation in his adopted city of Liverpool. So it was a bitter-sweet irony that brought Sam to the junior doctors’ picket line on 12 January – from inside the hospital. Because the NHS was doing all it could to ensure Sam has many years ahead of him too. 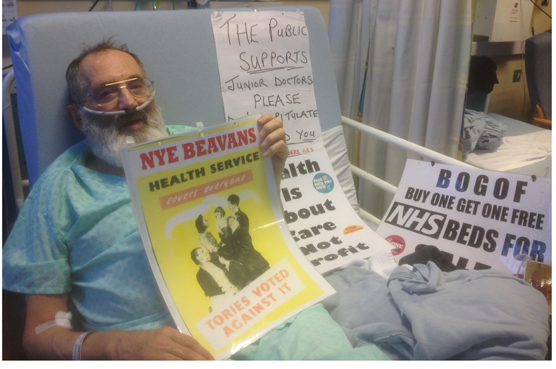 Sam was in the Cardiology ward on the day of the strike. But he still managed to get to near where the pickets were, and address the cheering crowd. This is what he said:

Sam’s words didn’t stop there. OurNHS picked them up. As did the local paper, The Liverpool Echo, local BBC radio, and the Daily Mirror.