Shadow Labour spokesperson, Diane Abbott, spoke at a rally outside Parliament yesterday (13 July) in support of the NHS Bill, which was presented to Parliament by her fellow Labour MP Margaret Greenwood (MP For Wirral West) under the 10 minute rule the same day. 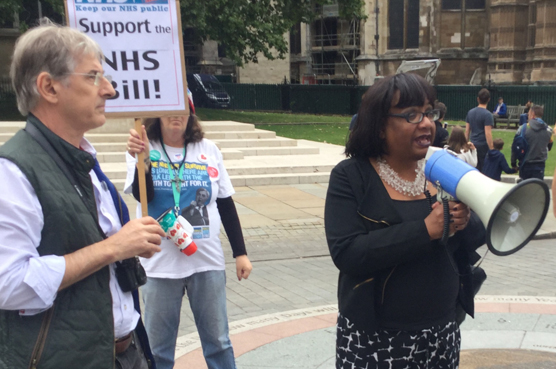 The NHS bill will now be presented for a second reading later in this parliament, currently scheduled for 4 November. But the most significant part of yesterday’s success – both the rally and the reading – are that Labour is showing substantive interest. The last time the Bill was put before Parliament, by Green MP Caroline Lucas , it was filibustered into oblivion by the likes of Tory MP Rees-Mogg, and received at best luke-warm Labour backing, even though the current Labour leader Jeremy Corbyn (then a back-bencher) signed his support up for it.

This follows the setting up of an advisory group on health by Shadow Chancellor John McDonnell, via the organising forum Health Campaigns Together. Keep Our NHS Public will be making further contributions to this group and KONP’s Co-chair, Dr Tony O’Sullivan, is the organiser for it, on behalf of HCT (any group with an interest can attend HCT meetings and each group is allowed one voting delegate).

“All in all, today was a step forward in that the Bill was not voted down, was presented by a Labour MP, has 9 Labour MPs as named supporters who were not named supporters on either of the previous two Bills, and it seems now to have the support of the Labour front bench. Though there’s still a bit of ambiguity in Diane Abbot’s support for the ‘principles’, the fact that she was willing to come and address the rally today, and that last night Corbyn included ‘the need to end the privatisation of our NHS’ as one of the three things ‘Labour exists for’, I see as hopeful signs.”