When this general election began Keep Our NHS Public and Health Campaigns Together knew that this was going to be the fight of our lives. We knew that another five years of Conservative Party rule would likely trigger the most dangerous existential crisis that our National Health Service as ever faced. Worse than that, many of us believe that a further five years of the Tories could ‘finish off the NHS’.

We also realised that if we were to defeat the Conservatives we would need to shift the debate away from the things on which they wanted to wage this election and onto things that brought people together and not what drove them apart.

We knew we had to transcend the insipid and persistent racism that the Conservatives have been actively fuelling over the last decade and more.

We knew that they would base a large part of their campaign on ‘Getting Brexit Done’.

We’ve always recognised that there are a various views on the EU referendum and knew that the Conservatives would seek to drive the wedge between those different positions and do so to distract from the devastating fall out of their ‘lost decade’ of austerity policies and vicious attacks on the NHS.

We would continue to campaign on our continued opposition to NHS inclusion in any trade deals (and point to the potentially very great damage to the NHS from reckless no deal exit), and we’ve done that in a big way with our joint working with We Own It and others, not to mention the amazing #HandsOffOurNHS petition that has now well over one million signatures.

We wanted to make this election about what unites us not what divides us.

What we then set out to do was make this election, not just the Brexit election, but as far as possible, ‘The NHS Election.’ And in that goal, alongside many other social movements and trade unions, we have succeeded.

Whatever happens on Thursday night however we do know that our fight for our NHS will not be over. Many services and hospitals are still threatened with closure and even with a less hostile government, we’ll have a lot of work to do in restoring our NHS to what it has been and then moving forward to increase its potential. If the Conservatives win, we will have to fight for our lives.

But it’s not over yet.

In these last hours of the election here are 5 things we're asking you to do to make sure the Conservative is not allowed to finish our NHS off.

We've put together a huge amount of content over this election, and so have our friends and allies, please take a moment to watch these great videos and make sure you share them on your social media platforms now.

New mum Louisa is asking you to vote for the NHS. Watch her heart-wrenching story.

If you want to protect the NHS, then please think again if you're planning on voting Conservative.

What you need to hear: nurses & doctors on ending the staffing crisis.

Here's the TRUTH - Check out this video and share the link to this powerful campaigning tool.

NHS staff are calling on family & friends to vote to get the Tories out.

Jack was forced to sleep on a hopsital floor for over four hours. This is the photo Boris Johnson refused to see.

Find out how a deliberate regime of cuts has undermined the NHS, paving the way for selling it off to private companies.

This nurse explains how privatisation is happening in front of our eyes.

Ken Loach, is long-standing supporter of KONP. If you want to support our work, then please chip in here.

2) Donate to the #NHSforAll Crowdfunder 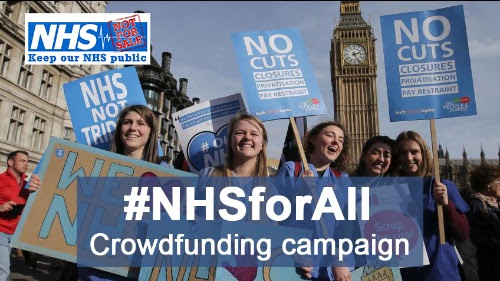 We are asking you to help us protect the NHS in its hour of need, as it has protected all of us. We want your help to build up our team with an extra full time campaigns officer to hold the line and build on our successes. Our dedicated team works tirelessly to save our NHS, but we can only afford four part-time staff. If we can increase our staffing levels, the positive impact on our urgent campaigning will be huge. We want your help to fight to prevent a further five years of Conservative government – The NHS is not safe in Conservative hands. We want your help to continue our campaigning around the country, by growing our local groups and supporting local campaigns. Please consider giving whatever you can by donating here.

3) Phone 5 friends and make sure they're not voting Tory

We all have a friend or a family member who might be considering voting for the Conservatives, research shows that a friendly conversation can often be the best way to change people's minds. We're not endorsing any particular party but we don't trust the Tories with our NHS. Why not not make 5 quick phone calls and tell them all the reasons why, for the sake of the NHS, they cannot vote Conservative.

There are plenty of useful sites out there, a quick google search with 'find my nearest marginal' will give you lots of hits, you can also see if you're nearby one of these top 30 marginals here.If you're near one - tonight isn't too late. Get out on the streets, you can print of fact sheets and leaflets here, give some out at stations, pop some through letter boxes, or reach out and find out if any canvassing is happening near you that you can join. As long as it's not for the Tories (or indeed the Brexit Party), you can make a real difference on the doorstep talking about the NHS.

5) Support our ongoing work and get involved

Please join Keep Our NHS Public if you haven't already, it's easy, takes less than 5 mins and can be done by clicking here. If you're already a member please stay with us, we'll need your continuing support and if you can afford to do so, please consider adding a regular donation to your subscription. You can do that simply here.

And remember to vote! And whatever you do, don’t vote Tory, #VoteNHS