The action was organised by Unite the Union to protest against actions taken by ‘NHS Improvement’ last week:

The chair of Kings College Hospital NHS Foundation Trust, Bob Kerslake, resigned his post on 11 December in protest at the impossible position in which Kings and other parts of the NHS have been placed. The majority of underfunded acute trusts are running at financial deficits, choosing to deliver safe care and trying to meet clinical targets. In the full media spotlight, Kerslake added his vociferous verdict to the chorus of others in stating that the NHS is being asked to do the impossible within the funds provided: he is clear that this is no longer safe.  This follows the failure of Philip Hammond to act to allocate sufficient funding to the NHS at The Autumn budget, conspicuously ignoring serious warnings from an array of NHS managers, think tanks, politicians, clinicians and campaigners (KONP 14/11/17).

Kerslake wrote a Guardian opinion piece entitled I’m quitting as a hospital boss: dire NHS funding problems give me no choice outlining that that he was resigning as “the Government … are simply not facing up to the enormous challenges that the NHS is currently facing”.

Through the article he spoke of his respect for the staff at Kings and his love for the hospital but how they had had to take over responsibility of another hospital since 2013 (Princess Royal University Hospital in Bromley with £30 million annual PFI payments) and make savings of £80 million over the last two years –  all leading to financial deficit:

After two years of delivering or getting close to the deficit target agreed with our regulator NHS Improvement, King’s has moved significantly away from its planned figure for this year. We’re far from alone – almost every hospital in London is struggling – but the scale of the deficit and the change means that we will be put into financial special measures.

Kerslake’s resignation is a massive blow to the NHS and it’s wide reportage will hopefully show the wider public what a dire predicament the NHS is in. As a crossbench (not party-aligned) member of the House of Lords, Kerslake adds his powerful voice of experience to the many now speaking out about underfunding. The former head of the civil service also quoted the Care Quality Commission from their recent draft inspection report, in his article, preempting those who will choose to defame him rather than look at what is really happening in the NHS: 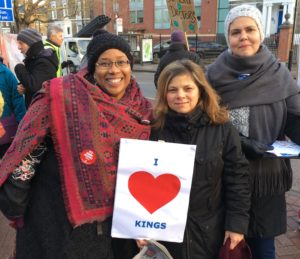 The chair was held in very high regard by staff at all levels. It was apparent the chair had gained the respect of staff with people reporting their approval at how the chair promoted the highest level of probity and governance and of how he demonstrated the organisation’s values and behaviours. Under his leadership the shape of the board was said to have changed to one where the right skills and vision was present at board level.

Immediately his prediction was proved right as a coordinated response set out to imply he was incompetent all along! – ‘Bungling Bob’ etc (see our media links below).

Recently, we detailed other influential sources who have spoken out about NHS underfunding (Fund Our NHS!). NHS bosses, think tanks and MPs from both parties have called on the Government to pledge more money to the NHS. When Hammond conceded less than half of urgent NHS needs in the Autumn Budget, this meant that we would inevitably see more underfunded trusts falling foul of NHS England and NHS Improvement; accused of overspending, through no fault of the NHS staff desperately trying to deliver safe care in crisis conditions; and placed in special measures – enabling imposed outsiders to force through unacceptable cuts.

Already we see that most hospital trusts across the UK NHS are not meeting targets – and we have yet to see the worst of winter. A&E targets have not been met in England for two years.

To make matters even worse and place more strain on the NHS the Local Government Association have reported that council funding is to be further cut in half over next two years, this will have a direct and devastating impact on social care and put further strain on a nearly broken NHS.

Kerslake’s quitting is a sad day for the NHS but he has drawn attention to just how much we need to fight for it to be returned to a fully funded, provided and accountable NHS.

You can see how your trust in your area is performing as it struggles with underfunding  and tries to meet A&E, Cancer and Operations targets via the BBC NHS tracker.

You can join Keep Our NHS Public here and help us to campaign to save our NHS.

This story gained a lot of media coverage

Here are links to a selection of articles:

The Daily Mail – QUENTIN LETTS: What the BBC DIDN’T tell you about Bungling Bob, the NHS boss who flounced out over funding