As we approach the 70th anniversary of the foundation of the NHS, very many also had their eye on 11 July when Eleanor Smith, MP for Wolverhampton South West was due to present her NHS Bill under the Ten Minute Rule procedure (a 10 minute speech, no discussion usually, and then a formal passage on to a second reading). When this was withdrawn at short notice, there were questions and anxiety. A prompt statement 22 June from Jon Ashworth, Shadow Secretary of State for Health & Social Care included an invitation to key figures to meet at the House of Commons to discuss Labour’s plans for legislative recovery of the NHS back to public hands. Following that meeting 27 June the following statement has been released with the agreement of the participants in that meeting. They include Jon Ashworth MP, Allyson Pollock (co-author of the NHS Reinstatement Bill with Peter Roderick, who was also present), John Lister and Tony O’Sullivan (the two co-chairs of KONP), Alex Scott-Samuel (Socialist Health Association chair) and Sue Richards (KONP executive) – they were mover and seconder of Composite 8 at the September Labour conference – and HCT officers.
We are moving forward with increased influence for campaigners.

John Lister, co-chair Keep Our NHS Public and editor of the Health Campaigns Together paper

Labour commits to legislation to reinstate the NHS

Campaigners are set to play a leading role in shaping Labour legislation to reverse the 2012 Health and Social Care Act and end the fragmentation and privatisation of the NHS.

That was the positive outcome of a constructive meeting called in Westminster by Labour’s Shadow Health and Social Care Secretary Jonathan Ashworth MP earlier today (June 27).

The meeting brought together representatives and advisors from the shadow health team and Labour Leader’s office and health policy advisors, along with Eleanor Smith MP who had planned to move the NHS Reinstatement Bill as a 10 minute Bill on July 11, Allyson Pollock and Peter Roderick the authors of the Bill, the Socialist Health Association, Health Campaigns Together, and Keep Our NHS Public.

It was called as an urgent response to the decision last week by the Labour whips’ office not to support Eleanor Smith’s Bill for parliamentary procedural reasons, and to address the subsequent criticism and fears expressed by campaigners in social media that this decision represented a retreat by the Labour leadership from a full commitment end privatisation in the NHS, reverse the 2012 Act and reinstate the NHS. 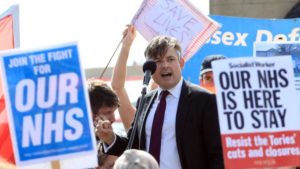 Jonathan Ashworth underlined his support for the underlying principles of the NHS Reinstatement Bill, and also stressed the PLP’s record of implementing the various commitments for campaigning as set out in last year’s Labour Conference Composite motion 8. He explained that his intention in calling the meeting had been to find ways in which legislation which all can support could be developed through a process of collaboration and consultation.

Campaigners were repeatedly assured that Labour’s leadership is committed to proposing its own Bill in the first Queen’s Speech of a Labour government that would embody the principles of the NHS Reinstatement Bill. The explanation of the decision to pull support from Eleanor Smith’s Bill was that the level of detail that it included is too great for tabling at this stage as a 10 minute Bill, with some of it potentially controversial within the Party. In particular significant debates need to be had on how Labour wishes to address the crisis of the heavily privatised social care system currently run through local government, and whether the NHS or local government should take charge of public health.

It was agreed that while this work needed to be done, in the short term, as Eleanor Smith and others argued strongly, a declaration of intent and principle is needed from Labour in this 70th anniversary year of the NHS.

With this in mind the meeting agreed:

The unique and historic nature of this meeting and these agreed proposals was stressed by Jon Ashworth and recognised by the meeting. This unprecedented level of collaboration is a result of years of hard work on the ground by campaigners.

The result will be a stronger and broader campaign in Parliament and across the country for legislation that will restore and improve the NHS as a publicly owned, publicly funded, publicly provided and publicly accountable service.

For help with stewarding and placard making please contact: