Thousands of nurses and health and care workers protesters in Central London yesterday to protest the lack of a meaningful pay rise for nurses.

While the Government had announced pay rises for a number of public sector employees last week, including some doctors, teachers and police officers, nurses were notably absent.

Many nurses are still smarting after the 2018 pay deal left many of them without the pay increases needed to address recover from successive years of cuts to their wages. The issue was further compounded by unclear communications from the Royal College of Nursing (RCN), responsible for pay negotiations, which suggested that pay increases on offer were higher than they actually were for many staff. The RCN’s chief executive was forced to apologise for this lack of clarity a year later, and many nurses remain deeply unhappy about the their pay. 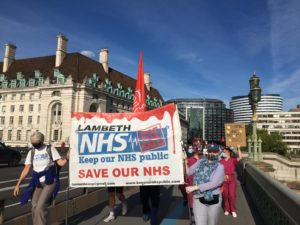 In this context, the announcement by the Government last week added insult to injury for many. After months of hard and dangerous work, in which hundreds of health workers have lost their lives to Covid-19 (in part due to the Government’s failures to adequately equip them with Personal Protective Equipment), staff are being bound into stagnant wages. That this has come from the same politicians who clapped the NHS and paid lip-service to “heroic” staff during the worst of the pandemic, has also spurred anger. Wednesday’s protest is the first of a rapidly-building wave of actions around the country: protests are planned in dozens of locations around the country on Saturday 8th August.

Thousands gathered outside St Thomas' Hospital in London – the hospital at which Boris Johnson was treated in April, located just across the Thames River from the Houses of Parliament –  and then marched on to Downing Street, in the first of a number of planned protests over pay planned for coming weeks.

"The demo yesterday was an excellent expression of the rage and courage of health workers. We demand respect and connect our struggle with the BLM movement in solidarity with so many BAME colleagues who have died. The fight over our pay is also about the future of our NHS, as Dave Carr from St Thomas’ said last night 'low pay means we have 44,000 vacancies'.

"The NHS only just coped with the first wave of Covid, let alone the second wave that is coming. The support we have is massive from the public. Health workers are enraged by this slap in the face from the Government. The 8th August demonstrations in over 30 towns and cities show the power and organisation we have to shame the Tories and win."

"We have seen how the Covid crisis has unearthed lots of inequalities in our society. What we have seen is mass appreciation shown by the public. However what we haven't seen is anything past a gesture to show support for frontline workers, particularly nurses who are finding themselves increasingly using food banks.

"We have seen a real time 20% decrease in NHS worker pay, and this 3.1% public sector pay increase is quite disingenuous, in that it is coming from existing budgets, and it is not going to reach a wide number of frontline workers. Nurses are excluded, junior doctors are excluded, GPs are excluded, care workers are excluded, outsourced cleaners are excluded. It is quite remarkable what the Government have done."

A number of nationwide demonstrations are being called for Saturday 8 August. You can see upcoming events on our Events page, including a list of the 8th August demonstrations, which we will keep as up-to-date as possible.

Click here to download the model motion put together by the organisers for you to encourage support from your local union branch.

You may also be interested in our popular post by Jemma James, a Staff Nurse based in Newcastle and a member of Nurses United.

If you work within the NHS and want to get involved you can find out more about our new campaign group NHS Staff Voices here. Whether or not you work in the NHS, you can also join Keep Our NHS Public online as a member at any time.