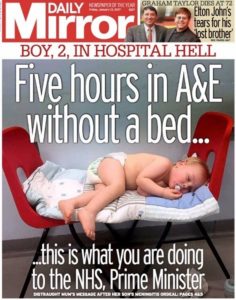 At the start of 2017, nothing highlighted more clearly the level of neglect shown by this government towards the NHS, and the risks to safety they have allowed, than this image: a sick two year-old waiting in A&E for initial assessment, including the possibility of meningitis, lying across two chairs in the A&E waiting room where there were no beds or cubicles.

Two deaths were reported of adult patients waiting on trolleys in Worcestershire Royal Hospital A&E in for admission to the wards and for treatment. One patient had been waiting 35 hours before eventually succumbing still on a trolley in A&E.

NHS England’s Simon Stevens had railroaded through the signing of operating plans by NHS trusts and CCGs end of January that are totally unrealistic. Stevens imposes draconian ‘financial control totals’ in order to deliver dangerous levels of underfunding demanded by Jeremy Hunt – through radical cuts, mergers and closures contained in England’s 44 so-called ‘Sustainability & Transformation Plans’ (STPs). Emperor Jeremy Hunt has no clothes, and everyone knows it:

While out-of-hospital care may be better for patients, it is not likely to
be cheaper for the NHS in the short to medium term – and certainly not
within the tight timescales under which the STPs are expected to deliver
change. The wider problem remains: more patient-centred, efficient and
appropriate models of care require more investment than is likely to be
possible given the current funding envelope.

The biggest march ever for the NHS condemned Government policy to underfund and privatise the NHS. See the summary of media coverage of this truly historic occasion – it changed the mood of the country about the NHS. Organised by Health Campaigns Together and The People’s Assembly Against Austerity, with Keep Our NHS Public, the demands were simple and clear:

Alongside a demand for an end to racism towards patients and NHS staff, this is a clear and relevant manifesto to save our NHS.

But our response was to ensure the electorate voted on the NHS and on social care – the NHS Roadshow was born the next day, set up by junior doctor, Aislinn Macklin Doherty for the Health campaigns Together, Keep Our NHS Public, People’s Assembly alliance who had staged the dramatic 4 March #ourNHS demonstration.

NHS Roadshow, Health Campaigns Together, Keep Our NHS Public and People’s Assembly combined once again and intervened in the General Election campaign to ensure that the NHS had a high profile. NHS Roadshow Twitter (renamed as Health Campaigns Together’s @NHScampaigns) Twitter was the fourth most effective Twitter stream on the election. And highly effective videos were put out including ‘So you’re thinking of voting Conservative’ which reached 11.5 million people.

Vote to save the NHS – support the NHS Roadshow – #voteNHS

The election result was a disaster for the Conservatives and a major step forward for campaigners for the NHS and against austerity cuts to health, social care, education. The hung parliament meant that the Tories had to buy support from the Democratic Unionist Party in the North of Ireland for £1bn. Difficult and controversial decisions would be ever more difficult to push through parliament – we had made a very real contribution as NHS campaigners  to the outcome of the election. Our job however was very far from done.

But the relationships and alliances forged in the making of the 4 March demonstration and the NHS roadshow stand us in good stead for the future.

Saturday 1 July and Wednesday 5 July saw events up and down the country to mark the 69th birthday of the NHS – a mixture of celebration and thanks to the NHS and staff and of anger and demands to government that they change direction and stop deliberate underfunding and privatisation of the NHS.

Our campaigning new website went live on 24 July – with heartfelt thanks to Geoff.

Notice of Hunt’s intention to privatise NHS Professionals – the in-house NHS agency staff organisation saving over £70m per year by-passing private agencies. The effective response launched by We Own It was supported by Keep Our NHS Public – see ‘September’.

An important debate on the future of the NHS took place at the Royal Society of Medicine 19 August. Very well organised by Bring Back The NHS, the debate was put on by Discourse and attracted the brilliant presence of Professor Stephen Hawking, as well as a range of informed speakers including Sarah Wollaston, Conservative MP for Totnes and Chair of the Commons Select Committee. The importance of the debate should not be lost, but the overwhelming impact was the decision of Jeremy Hunt to challenge the analytical abilities of Stephen Hawking – the rest is history. Hunt came off significantly the worse in reputation and credibility. Thank you to Professor Hawking. What follows is a brief history of that time:

September was a boost to NHS campaigners: following We Own It’s campaign with KONP in support, Justin Madders referred the threatened privatisation of NHS Professionals to the Audit Commission. Jeremy Hunt backed down and the Department of Health announced its withdrawal of the plan to privatise.

Then came the Labour Party annual conference: health campaigners, KONP activists, Socialist Health Association and LP members mobilised to get a staunch defence of the NHS and a call to end the market in healthcare on the agenda. Composite 8 was passed unanimously – this was a great day. Read more below.

[We have published an excellent briefing and post on ACOs]

So – four doctors and academics announced their intention to mount an judicial review against Jeremy Hunt and NHS England. These four became ‘The Famous Five’ when Professor Stephen Hawking joined them in December.

They are still crowd-funding for funds to cover legal costs – please support here and read more below:

The Autumn Statement was 22 November. Campaigning to highlight the need for emergency funding for health and social care came from many quarters – NHS Providers, NHS England and Simon Stevens himself, the major thinktanks, Sarah Wollaston Chair of the Commons Health Select Committee and of course campaigners.

The People’s Assembly Against Austerity held a rally in Whitehall at Downing St the night before to highlight the impact of universal credit vindictiveness, foodbanks and cuts to health and social care. The next day Chancellor Philip Hammond refused to fund the NHS safely and failed to even mention social care.

December:  Evidence of privatisation racing on

Despite the blatantly false denials from Jeremy Hunt that he is privatising the NHS, the scale of privatisation has been confirmed by The Guardian at year end: 70% of 386 NHS contracts tendered in 2016/17 financial year went to private companies! £3.1bn of health services – including a shocking £1bn of contracts to Virgin over the last year – the very same company that has sued the NHS for failing to renew the Surrey contract (above). It is heartening to hear a clear message given out on one of the mainstream media outlet at year’s end on LBC:

The government aren't privatising the NHS by the back door, says @AyeshaHazarika. They're doing it by the front door instead. https://t.co/y8mit0jrWU

Deliberate neglect of the NHS for eight years – over 5 years on Hunt’s watch – leaves NHS staff facing unacceptable winter pressures once again. They have been totally let down by Hunt.

And Plymouth runs out of corridor space for patients on trolleys already stacked up because the A&E proper is full.

We will indeed ‘fight for our NHS’ – for the care patients need and for NHS staff who need our support.

Please join us, support us, help fund our campaign

Become an individual member of KONP and join one of our local groups – near 80 across England. Get your organisation to affiliate to Health Campaigns Together – with 80 affiliates including four national unions: Unite the Union, Unison, the Fire Brigades Union (FBU) and National Education Union (NEU).

Together we are strong enough to win back and protect the NHS. We will force this government to change course or go – that is what it will take to restore NHS and social care funding, to end the threat of privatisation and to return the NHS fully to public service.

Watch for our response to the Winter crisis – and join us

Put Saturday 7 July in your diary

National demonstration to mark the 70th anniversary of the launching of the NHS – 5th July 1948 – this year’s event launched once again in celebration and in thanks – but with extra significance to our defiant opposition to attempts to underfund, dismantle and put out to private contractors our very special and vitally needed National Health Service.

Follow the campaigns round the country – from Huddersfield to Dorset and beyond!