We now know through the release of leaked documents on trade negotiations with the US that the NHS is at at grave risk and almost certainly on the table. The question that needs to be asked is whether Boris Johnson will be willing and able to remove it. The answer is almost certainly no.

If the NHS is not on the table – why were the papers redacted before the leak made them public?  Because this whole deal is politically sensitive as the commercialisation of the the NHS is at the heart of Conservative Government plans to woo the US in future trade deals.

The papers show that anything not listed as specifically off the table are on it - so the NHS has to be explicitly removed, which the Tories given the tone of the document generally – will be reluctant to do.

While the dossier is careful to hedge its language on the National Health Service, passages like “we will need to be able to go into more detail about the functioning of the NHS and our views on whether or not it is engaged in commercial activities” indicate a commitment from the document's authors to find loop holes that will enable our health service’s further repurposing for profit.

In any case it will be extremely difficult to legally exclude the NHS because it no longer has the protection of being a truly public service due to the invasion of private companies into it already. Something well documented on this site. Once the NHS became a market, split into commissioner and provider arms, it opened itself up to private companies competing for trade, and is therefore legally difficult to take off the table.

To be safe, the NHS needs to be reinstated legally as a fully public service and the Tories are not going to do that. That’s one of many reasons why asking people, NOT to vote for them in the General Election.

Have the Tories forgotten the Carillion story? –  a massive company which collapsed during the building of 2 new hospitals – now hugely delayed - and which laid off armies of staff, providing such services as cleaning and catering to the NHS. 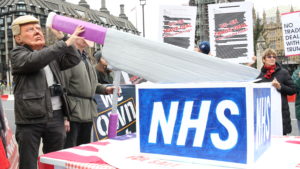 Have they forgotten that many other private companies, like Virgin, who famously sued the NHS over lack of profits, are already deeply embedded in the NHS. Or others, like Optum, part of United Health, the American healthcare company, already helping to create ‘integrated’ care organisations in the 44 regions of England?

Have they forgotten the flagship huge privatised pathology network being created for the whole of SE London, providing blood and tissue tests for the 70% of us who need them for disease diagnosis?

Have they forgotten the state-of-the-art centre for orthopaedic surgery being built at Guys Hospital in London with money from Johnson and Johnson - the disgraced US company involved in several healthcare scandals?

So the NHS is riddled with hidden privatisation already and not easily protected legally from being included in trade deals. The NHS will be snatched from our hands if we aren’t careful.

And it’s not just the NHS, not just drug patents and prices – so many other goods and services inextricably intertwined with health, will also be on the table, according to the leaked document. Our medical details will be sold off under agreements to provide data to insurance companies. Big American tech companies will provide our digital equipment. 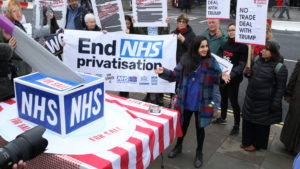 A few hours after the release of the un-redacted dossier, Co-Chair of Keep Our NHS Public, Dr Tony O'Sullivan, was asked to debate what the document might threaten if the trade deals went ahead under a newly elected government under Boris Johnson after December 12th.

You can watch the video here:

That’s why Keep Our NHS Public and its sister organisation Health Campaigns Together have launched the Don't vote Conservative, #VoteNHS campaign during this election and are doing everything to persuade voters that the NHS is not safe in Tory hands, more so than ever with the threat of this trade deal hovering over us.

You can find out more about our election campaigns here 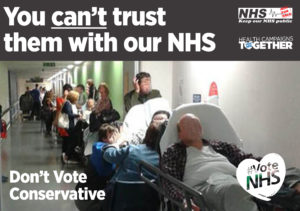 Keep Our NHS Public has also joined forces with We Own It to campaign against this and any other trade deal that puts our public services at risk.

We have to campaign for a type of trade deal that does not benefit the rich and powerful and does not snatch services away from state provision. Health is a basic human right and the NHS is at the heart of it.

We have to defend it and as much of the rest of the economy as possible from a trade deal with the USA.

Please – if you haven’t done so already, get your election candidates to declare publicly:

Remember, Don't vote Conservative #VoteNHS, It’s the only sure way to keep the NHS off the table.