Boris Johnson, our new unelected prime minister, who has previously advocated  health service privatisation and commands the admiration of Donald Trump, faces a strong backlash against threats to the NHS from new trade deals.

The huge response to two public petitions against the idea that the NHS could be part of a Trump trade deal shows that, as the NHS enters its 71st year, there is still massive support for the NHS as a public service, despite the pressures it faces. The public does not want to see it sold off or used as a commodity from which to profit.

A Parliamentary petition - 'Don't put our NHS up for renegotiation' - calling for concrete safeguards to ensure that the NHS will be kept out of trade deals after Brexit attracted nearly 170,000 signatures. This meant the petition had to be considered for debate in Parliament.

A petition by Keep Our NHS Public launched on Change.org during President Trump’s state visit (“Keep our NHS out of US trade deals”) went viral and has gained over 700,000 signatures to date, making it one of the most popular petitions Change.org has seen.

The debate took place on 22nd July in the House of Commons. Opposition MPs argued that, in the face of a 22% to 30% fall in total trade expected after Brexit, the government will be looking for a quick gain through free trade agreements with countries like the US and under pressure to include the NHS. Among the consequences would be the use of investor protection measures that would allow the British government to be sued by corporations for simply introducing policies for the public good on grounds that these interfered with investors’ profits. Other consequences include vastly increased costs for medicines if the US pushes for full market access for US products. Many MPs therefore recognised that the NHS is in urgent need of concrete protection, and that this means changes in legislation and the introduction of a process allowing Parliament meaningful scrutiny of trade deals.

In contrast, Conservative Craig Mackinlay suggested that the NHS was protected because, as a government-procured public service “supplied in the exercise of governmental authority”, it can be excluded from future trade deals - just as it was, for example, in the Comprehensive Economic and Trade Agreement (CETA) between the EU and Canada. However, his statement is misleading: the NHS was not unambiguously excluded from CETA. This is because protection for services “supplied in the exercise of government authority” does not extend to services that are provided on a commercial basis, or in competition. Ever since the NHS was opened to the market, and especially since the Health and Social Care Act (2012), there has been competition between NHS service providers.

Mr Mackinlay was also misleading in suggesting that even if a government should try to use trade deals as a way of privatising the NHS, such attempts could not be ratified without the scrutiny of Parliament. The current position is that there is very little opportunity for Parliament to scrutinise trade deals; no definitive way for Parliament to prevent the ratification of trade deals; and no plans on the part of the government to change Parliament’s role (although an amendment to the Trade Bill concerning deals agreed pre-Brexit might address this, if adopted.) So far, it is unclear what the ratification process will be for deals negotiated by the UK after Brexit.

During the debate the Minister on Trade Policy, George Hollingberry attempted to reassure his fellow MPs by saying:

I guarantee the House that the Government will protect the NHS in trade negotiations. That means no requirement to increase private provision, no allowing American companies to ramp up drug prices, and no undermining the safeguards on healthcare data. That is a guarantee that I, the Secretary of State, and many others have repeated on many different occasions …… I cannot imagine a Government who would not want to do so.

KONP is not convinced by this assurance, especially given that successive Conservative governments have taken a hostile position to the NHS as a publically owned and publicly provided service. 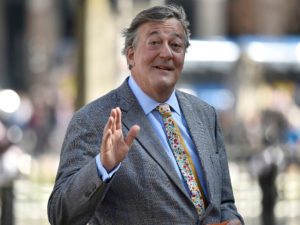 With the petition already viral, the celebrity Stephen Fry added his backing to our petition by sharing a link to it at the end of his most recent YouTube update (and later sharing the link on Twitter).

The video compared the NHS with the private healthcare system of the United States, highlighting the perils of unaffordable healthcare.

We are planning our next moves with allies.

We need to keep up the pressure

With a fractured Conservative Party and a tiny minority in Parliament, the new prime minister cannot afford to ignore the strength of feeling about the NHS and the need to protect it from new trade deals. Indeed, he has said:

Under no circumstances would we agree to any deal, any free trade deal that put the NHS on the table. It is not for sale. 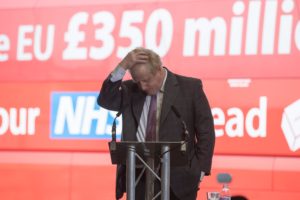 The fact that he has felt obliged to issue this statement is testament to the pressure he is feeling from NHS campaigners, health workers and the general public on this issue. The key now is to keep the pressure on and intensify it, preventing Johnson from engaging in his trademark duplicity over this latest promise. Above all, supporters of the NHS must be ready to mobilise at short notice in the months to come if a trade deal is mooted which damages NHS care and/or impinges on the long-term financial sustainability of the NHS.

A spokesperson from the Department of International Trade offered no assurances in responding to Keep Our NHS Public:

In regards to the US in particular, the government has been consistently clear that it is committed to negotiating an ambitious FTA [Free Trade Agreement] with the US that maintains our high standards for businesses, workers and consumers.

The government must specify that the NHS is completely outside of any trade deal negotiations and not just give reassurance that the NHS will not be sold to outsiders. We demand guarantees by law that the NHS remains as a public service, not as a bargaining chip in business negotiations. We demand that our Government ends the running of our NHS through commercial and competitive clinical contracts.

As Dr Sonia Adesara, the junior doctor who started the Change.org petition on behalf of Keep Our NHS Public, says:

These petitions have shown our politicians that we are watching and we will hold them to account. We need a formal legal commitment from this government that our NHS will be kept out of all trade deals. We need to watch closely what happens … over the next few weeks. If we continue to get empty statements, we will increase the pressure. We will not let our NHS be sold off to US corporations. Our NHS is precious, we will keep fighting to protect it.

We need legislation, not platitudes - and ideally a change of Government

This Conservative government is weak and we've shown with our recent campaigning activity that it can be forced onto the back foot. We plan to intensify our work with allies to protect the NHS in all future trade deals.