Setting an example for the rest of the NHS workforce, 200 UNISON members at Bradford Teaching Hospitals Foundation Trust (BTHFT) voted for strike action (97% of those voting - securing a 70% turnout) after the plans were unveiled to set up a Wholly Owned Subsidiary Company (WOSC). 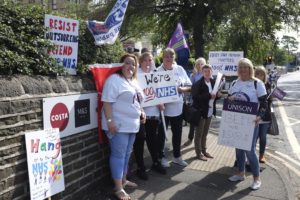 The Trust wants to transfer around 600 staff from its estates, facilities and clinical engineering departments into the new company, but denies it is privatising services.

UNISON members want to stay employed within the NHS to ensure they retain NHS conditions of service – and remain part of the NHS ‘family’ and an integral part of the Bradford team.

The first day of strike action (8thJuly) saw around 150 UNISON pickets covering all four hospital entrances together with members of the public and supporters (including Leeds Keep Our NHS Public).

There was a very clear message for management - those on strike fully intend to win this dispute and stay within the NHS. Huge numbers of public passers by and those visiting the hospital indicated their support for the UNISON members on the picket lines.

Business cases for WOSC have largely depended on tax avoidance while blatantly disregarding the lip service usually paid by managers to the importance of team working and the positive benefits this has for patients.

The Trust wants the new company, Bradford Healthcare Facilities Management Ltd (BHFML), to operate from 1 October 2019, and say this is essential for delivering efficiency savings. It anticipates that as BHFML grows, it will make an increasing profit and will be able to seek new business opportunities releasing cash from “tax efficiencies”.

The Trust is at pains to argue that this is not privatisation: “the creation of a WOS company is not privatisation”. This claim must be rejected not least on the basis of the widely accepted typology of privatisation (see: Peedell C. BMJ 2011;342:d2996 doi: 10.1136/bmj.d2996) which encompasses the following:

It is clear from the above that setting up a WOSC falls into category c. UNISON members in Bradford are united in their opposition to these plans and deserve the support of NHS campaigners and the wider public.

Leeds KONP members revisited the picket line during the week and on Sunday handed over a cheque for £75 for the strike fund in solidarity.

Support remained strong among UNISON members, and talking to other health workers including nurses on site, there was much support within the hospital.

Agency staff were brought in by management to provide services, paying 2-3 times the usual rate, and Rentokil were contracted for deep cleaning work. 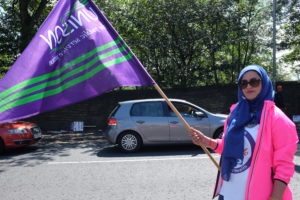 More than 300 staff who work at Estates and Facilities at the Bradford NHS Trust have voted to strike from August 1. This follows a seven day strike which ended on Sunday July 14. The members, including porters, domestics, security and catering staff say the Trust’s decision to set up a “wholly-owned subsidiary” company is backdoor privatisation.

Tony Pearson, UNISON’s Head of Health in Yorkshire and Humberside, said members want to stay employed by the NHS. He said:

The Trust continues to put out misleading claims that staff terms and conditions can be guaranteed for 25 years. Yet Deputy Chief Executive of the Trust, John Holden, openly admitted in a meeting with UNISON representatives last Tuesday that the Trust could not legally guarantee these claims. To make matters worse he enraged a meeting of over 200 members of staff by again admitting he couldn’t legally guarantee the claims about pay and conditions. Members were furious at this admission given that the Trust has spent 18 months trying to convince them that their contracts would be legally protected for 25 years. Many of them are calling for John Holden to resign over the issue, as they have lost all confidence in his leadership. Any contract can be lawfully terminated for ‘genuine economic or business reasons’. To simply state that the length of the contract would be 25 years is deliberately misleading. There would be little or no protection against a future management decision to impose on our members new contracts with worse pay and conditions.

Tony Pearson has spoken to the MPs after last week’s meeting with the Trust management.

They share my disbelief that so far John Holden has refused to ask the full Board of the Trust to re-consider its position.There is widespread opposition to the privatisation of these jobs and services, not only from the 300 striking workers but also from their colleagues and most importantly, from the people of Bradford. Yet despite this opposition the Trust is not going back to its Board members and seems hell-bent on forcing our members out of the NHS. Striking is always a last resort for our members but they have been left with no alternative but to continue with industrial action. They are not taking part in this for personal gain, but simply to stay as they are, employed within our NHS. The Trust Board must convene a full meeting to review its position over the transfer. We are also calling for the Board to open up their business case for public scrutiny. Earlier this month our MPs were given two different estimates of savings that the Board claimed could be made by a new company.

Within a matter of hours the Trust gave a second estimate which was £13 million greater than their original estimate. While Judith Cummins and John Grogan received apologies for the inaccurate information they were given, no-one to date has offered a plausible explanation for these breathtaking and incompetent miscalculations. The Trust Board must either scrap these plans which amount to little more than tax avoidance, or at the very least shelve them until such time as the plans are made available for full public scrutiny.