The People’s Covid Inquiry has completed its task, bringing together the testimonies of over 40 witnesses and using that evidence to produce a significant report which points out many of the mistakes made in the management of this public health emergency, with fatal consequences.

The conclusions of that report clearly demonstrate that the offence of misconduct in public office may have been committed. Keep Our NHS Public, as the campaigning group which organised the inquiry, has accordingly sent a copy of the report to the Commissioner of the Metropolitan Police, Cressida Dick, requesting that she authorises an investigation of the facts uncovered with a view to considering prosecutions.

Misconduct in public office is an offence under common law defined as follows: ‘where there is wilful neglect of duty ‘to such a degree as to amount to an abuse of the public’s trust in the office holder’.  The letter also suggests there may be the offence of corporate manslaughter and potentially offences under other statutes relating to the work of the Care Quality Commission and the Health and Safety Executive.

The rule of law

We often hear the phrase today it is one rule for them and another rule for the rest of us. But a core part of our largely unwritten constitution is the principle of the rule of law – one set of laws which applies without fear or favour to every person living with the jurisdiction, however high or low, and bequeathed to us by forbears who fought for this principle of democracy in the past.

Yet the executive branch of government remains enormously powerful, able to use its dominance of the legislature to escape full scrutiny and its powers of patronage and the power of the purse to ensure that its misdeeds are rarely exposed, its incompetence escapes criticism and that those who let it off the hook go on to receive the honours and privileges it can bestow.

Yet 170,000 people and rising have lost their lives, a very significant proportion of them unnecessarily, and because of government action or inaction.  Justice demands that those who could have made a difference to that terrible toll are brought to account under the law.

There is one public office holder, the Commissioner of the Metropolitan Police, who has the power to investigate these issues and prepare the case for prosecution.  What will she do? 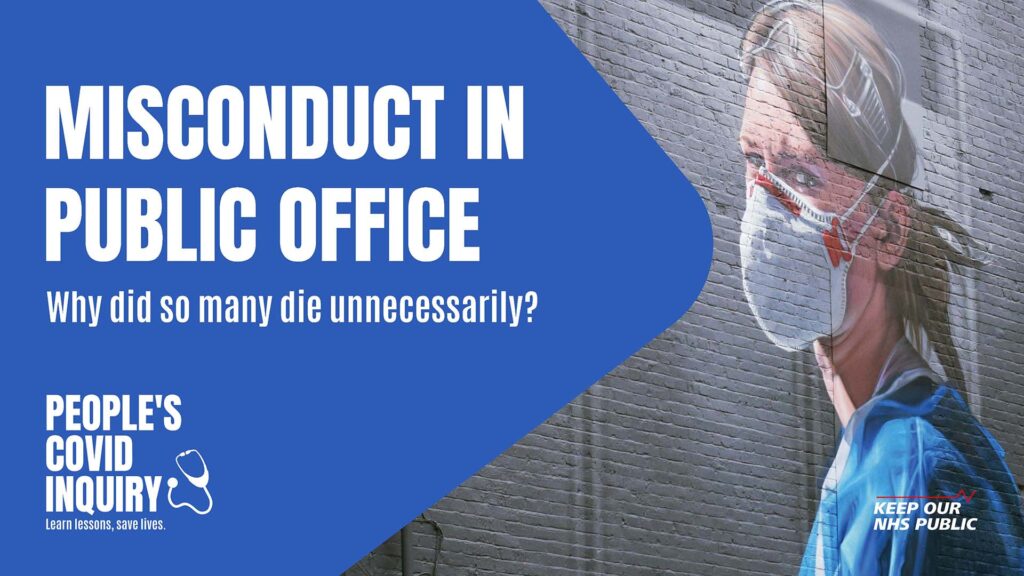 What will Cressida Dick decide?

30+ years ago, a young, intellectually gifted woman joined the police.  Despite the overwhelmingly male culture and the recent history of corruption near the top of the Met, she made her way to the very highest position in policing in the land.  Quite an achievement.  But it is not enough to be the first woman Commissioner.  That offers her a footnote in the history books.

More importantly, will she be the public office holder who takes her duty to the public seriously and does not allow herself to be subject to the blandishments of power?  She recently received protection from the Government when the tabloids were demanding her resignation over the Sarah Everard case and other recent appalling behaviour by some of her officers.   The Government provided cover for her.  Will she reciprocate?

Let us hope she remembers that young female graduate of Balliol College, Oxford.  She could have given her working life to so many different organisations, but she chose the police and we can only assume that this was because she subscribed to the fundamental values of policing by consent set out by Sir Robert Peel, the Home Secretary who set up the Metropolitan Police in 1822.  One of his nine principles of policing, designed to preserve public consent for policing, is

‘To seek and preserve public favour, not by pandering to public opinion, but by constantly demonstrating absolutely impartial service to law, in complete independence of policy…’

The future public inquiry has no established timetable and will take years. There is no legal impediment to an immediate investigation of the potential offences outlined here, and there is an imperative to do investigate before witnesses, memories and documents fade beyond reach.

So Cressida Dick now faces a choice.  Will she act without fear or favour and carry out her duty to launch an investigation where there is a prima facie case of misconduct in public office, and fulfil the promise she represented? Or will she motor on to a comfortable retirement at the heart of the establishment.  What will Cressida do?

READ OUR REPORT & OUR LETTER TO THE POLICE HERE