As we set out recently, there was no pro-NHS candidate in this Conservative Party leadership election – Boris Johnson’s closest rival was Jeremy Hunt, former Health Secretary and architect of much of the chaos, privatisation and underfunding that has decimated our NHS in recent years. Nevertheless, now we know that Boris Johnson will be the next Prime Minister, it’s worth taking stock of his individual record.

As a Conservative politician of long standing, Johnson has never seriously challenged his party’s catastrophic record on the NHS. Though he presents himself today as a breath of fresh air, he has served for years in the governments that have systematically opened up the NHS to privatisation, deprived it of vital funding, and inflicted top-down disruption on patients and health workers. In fact, the NHS is one of very few topics on which the legendarily talkative MP for Uxbridge has historically been fairly silent, meekly towing the party line of endless top-down restructuring and commercialisation.

During the leadership campaign, we got at least one glimpse of what policy Johnson actually favours. At a private garden party, Johnson told supporters that the NHS “absolutely… needs reform” – echoing a long-standing, duplicitous line of argument in which successive Tory leaders have wrongly painted the NHS as fiscally unsustainable, and used this as justification for destructive restructuring that only increases financial pressure on the health service. Although Johnson claimed to recognise, in the same speech, that the NHS also “needs more money”, this posture is less than convincing given the serial dishonesty, both of Johnson himself, and of his party, which has consistently hidden and misrepresented its squeeze on NHS spending.

Another highlight from Johnson’s campaign was his absurd and insulting suggestion that mental health issues can be cured by “hard work”. The reality is that we need proper funding for NHS mental health services – services that successive Tory governments have cut dramatically, leading to a permanent crisis in mental health provision, while years of austerity have steadily swelled the ranks of those suffering with mental health issues. (KONP is currently planning a major conference on the mental health crisis - click here for more details.)

NHS “on the table” with Donald Trump

Alarmingly, Johnson is a leading advocate of a post-Brexit “trade deal” with the US administration of Donald Trump. Indeed, as Foreign Secretary, Johnson has curated close personal and political links with Trump, who in turn made it clear that Johnson was his favoured Tory leadership candidate. Trump’s recent suggestion that the NHS is “on the table” in trade talks drew a furious reaction from most people in the country, with over 700,000 people in the UK signing a KONP petition against the idea. But while even most Tory leadership candidates decried the suggestion – albeit hypocritically – Johnson stayed ominously silent.

In other words, all the signs are that Johnson will try to score his big “deal” by offering up the NHS to the predatory vested interests that dominate the catastrophically dysfunctional US healthcare market. For their part, US government and health lobby figures have made it clear that NHS services are their number one target in any such negotiation. Alex Azar, Trump’s Health and Human Services Secretary, spelled the logic out clearly last year: he consciously aims to push up prices of life-saving drugs for British patients, claiming that this will lower the same prices for patients in America. In other words, while Johnson lays out the red carpet, his “friends” in Washington are planning a hostile takeover. 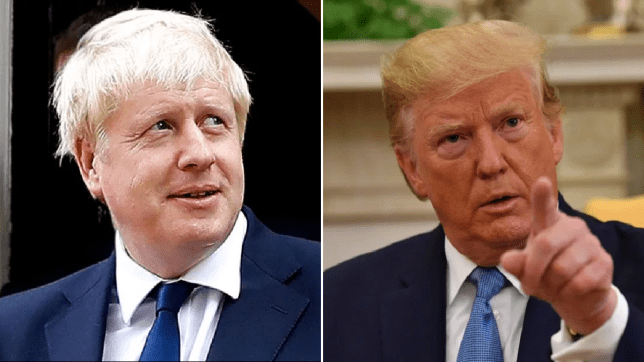 Boris Johnson’s apparent plans for greater NHS privatisation and disruptive “reform” are no surprise: for years, Johnson has been a passionate ideological advocate for privatisation as an end in itself. He has close links with a spectrum of right-wing thinktanks such as the Institute of Economic Affairs, which traffic in sensationalist claims of a failing, crisis-ridden NHS, in a bad-faith attempt to soften up public opinion for greater privatisation.

More material ties exist, as well, between Johnson’s political and business dynasty and the private healthcare lobby. For example, Johnson’s brother and close political ally, Jo Johnson, has directly received thousands of pounds in political funding from an investor linked to Circle, a private healthcare conglomerate which recently attempted to sue the NHS for not renewing its £320 million contract for services in Nottingham, after a record of profiteering and failed management.

We will fight to defend our NHS!

He was wrong then – the vast majority of people in the UK love and cherish the NHS precisely because it provides free and unconditional healthcare to everybody. And he is wrong now, if he believes that we will allow him to trade in the NHS for a dysfunctional system on the US model, in which inferior care is rationed out by price, with millions going bankrupt each year simply because they get sick. Nor will we allow the Trump Administration to chew up our healthcare system bit by bit in a malicious “deal” lined up to save face for the new Prime Minister.

Mr Johnson must find another solution for his political problems. Our NHS is not for sale!

We invite every reader who cares for the NHS to join Keep Our NHS Public.

We are the largest and longest-running national organisation working to halt privatisation and restore a fully free, publicly funded and accountable NHS. Joining is quick, easy, and affordable. We have won many victories to date – but we need your help!