Holding the government to account over the NHS in the current General Election has required us to cut through many layers of spin, deception and misinformation.

Tory ministers have been called out on issues like their absurd projections on nurse recruitment, and their unconvincing denials about the content of a planned US trade deal. However, it is has been hard to contest the dishonesty of the Tories’ over-arching narrative: that the NHS is broadly “safe in their hands” and is receiving investment from the government.

Then, on Sunday, a photo emerged that was so devastating that it brought the Tory spin machine to a sudden halt. From Leeds General Infirmary, an image emerged of Jack Williment-Barr, a 4-year-old boy, sleeping on the hard floor of a hospital treatment room due to a lack of beds. After spending four hours on the floor the boy, who had been admitted with suspected pneumonia, was then moved to a ward trolley, where he waited for a further five hours.

This set the scene for the following day, Monday, to become by far the most shameful day in the Conservative Party’s already highly dubious election campaign.

First came Boris Johnson’s extraordinary interview with ITV News journalist Joe Pike. Shown the photograph by Pike, Johnson not only refused to look at it, but seized Pike’s phone and pocketed it himself, as he continued a barrage of irrelevant and misleading generalities about his alleged “huge investments into the NHS”. There could be no clearer indication of the Prime Minister’s contempt for the patients harmed and endangered by his party’s relentless underfunding, privatisation and mismanagement of NHS services. The video clip – which has now been shared millions of times on social media – perfectly crystallises the accurate instinct, on the part of many voters, that the Conservatives are seeking to evade accountability for their NHS record.

It is frustrating, then, that while many media outlets have aired the clip of the Prime Minister’s bizarre behaviour, very few have supplemented this with concrete analysis that puts the photo of Jack Williment-Barr in the context of a decade of war against the NHS by the Conservative Party.

October was the worst month in history for A&E services in the UK. Recent research suggests that over 5500 patients have died since 2016 as a direct result of waiting too long on hospital trolleys to be assigned a bed. Leeds General Infirmary, specifically, has been obliged to cut over £100 million in the 2017-19 period as part of two sequential “efficiency plans”. Statistically and anecdotally, events at Leeds General Infirmary are in no way anomalous or unrepresentative of broader trends in our NHS – indeed, in the days since the photo emerged, similar heart-breaking images have surfaced from other hospitals around the country. 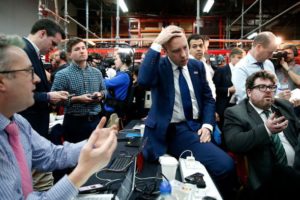 Before Monday was out, the Conservative Party had made further attempts to spin away the public’s fully merited anger, sinking this time to an even deeper moral low. After Health Secretary Matt Hancock paid a visit to Leeds General Infirmary, Tory aides briefed journalists that his aide had been “punched” by protesters outside. This was reported as fact by assorted prominent reporters, including the BBC’s Laura Kuenssberg, before video footage emerged revealing that the accusation was wholly untrue: the Health Secretary had smeared concerned health campaigners with spurious accusations of violence, to distract from the devastating case of Jack Williment-Barr and the broader NHS situation which it exemplifies.

At the time of writing, the Conservative Party's lies have still not ended: there have been numerous sightings of mass-replicated, copy-and-pasted social media comments in circulation accusing Jack’s parents of having staged the photo as a political stunt. High-profile Conservative-supporting journalists endorsed these offensive slurs against the parents; and, shockingly, this is not the first time during the election campaign they have attempted to deflect blame by launching personal attacks on the parents of sick children. The same thing took place after Omar Salem, whose daughter almost died while waiting hours to see a doctor, confronted Boris Johnson on a PR visit to Whipps Cross Hospital in East London.

The Conservative Party’s Day of Shame should not be forgotten or forgiven by any health worker, patient, or supporter of the NHS.

Time and again, they have opted to deceive the public and malign their opponents over issues that have life-and-death consequences for patients, all while basic services have degenerated catastrophically on their watch. That Matt Hancock – a serial liar whose only interest is in facilitating private firms in profiting off NHS patients – remains in the post of Health Secretary is a clear sign, in and of itself, of the total contempt of the government for the NHS, its workers and its patients.

In two days, voters will reach a verdict on this government and its record. We must continue to hold the government to account for their record, and we must also continue to organise and campaign with a view to the immediate defence and the long-term welfare of our NHS, regardless of who occupies 10 Downing Street.