A recent report in the Guardian needs to be taken with a pinch of salt, argues Keep Our NHS Public.

The article ‘Long journeys caused by A&E closures will not lead to more deaths‘ citing a new study from National Institute of Health Research (NIHR), suggests that mortality is ‘not affected’ by closures of A&E departments and subsequent longer ambulance journey times. It states,

Shutting A&E units does not lead to more patients dying because they have to travel further for life-saving treatment, according to the first British research into the impact of closures of emergency departments.

The report was undertaken by academics at Sheffield University and funded by the NIHR and published on their site. The full report can be read here.

The major problem with this assertion is that it doesn’t factor in the already crippling cuts and lack of beds in the areas affected. It’s also not currently possible to discern what the impact of these closures is regards five year morbidity and mortality rates. And those figures may tell a very different story.

Dr Goulden provides a rebuttal of the claims, and makes several points, which will likely be useful to local campaigners fighting closures in their area.

The report is Methodologically relatively sound. However, it’s not clear how much scrutiny from the wider community of researchers the report has been subjected to. They’ve also not edited it to the conventional length and format of an academic paper, further limiting scrutiny, as people will either read the 8 page summary (not enough detail to properly appraise it), or will be put off by reading the full, unedited 272 page document.

The headline’s positive spin is that there’s no effect on short-term mortality. That’s true up to a point. The report bases this claim on the fact that the absolute number of out-of-hospital deaths doesn’t change (i.e. people don’t die before reaching hospital). Also the total number of deaths within 7 days of becoming ill with an emergency condition doesn’t change either. So far so good. 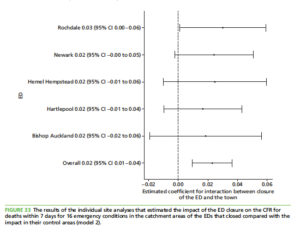 However, in their other measure of death (fig 33 pictured), they find that the ‘case fatality rate’ for a set of emergency conditions (i.e. the % of people with an emergency condition who die) was in fact 2.3% higher in the areas which had their A&E closed or downgraded. They don’t give enough data to contextualize this, but this to me is very concerning.

I also find the results on the time from 999 call to eventual hospital arrival concerning. In the more remote areas, the average increase is 9.1 minutes for the ‘red’ (calls i.e. serious life-threatening conditions). In one of the sites, Newark in the East Midlands, the increase was 16.7 minutes (p. 41).The truth is, in many cases that still won’t make a huge difference but it’s still not at all good. 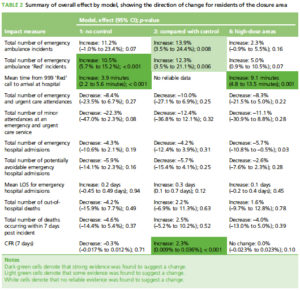 Table 2 (pictured above), summarises their findings. They do a huge number of analyses, most of which don’t show much, but for the 6 analyses that show a statistically significant difference, it was always in the direction of showing that things got worse in the areas with A&E closure or downgrading. As the author of the study said to the BMJ:

We didn’t find the better outcomes for patients that planners hoped to see from closing these small departments. This means it isn’t clear that the disruption and anxiety that can be caused by closing emergency departments is worthwhile.

On what the report doesn’t consider:

As the report stands, which appears poorly edited and hard to sift through, it is far from being good news. 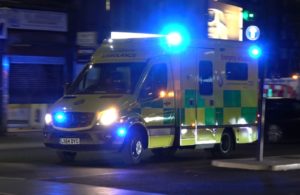 In summary, despite the positive headline, this new study of areas which have had their A&E departments closed or downgraded, we can still see that the proportion of people with an emergency condition who died went up by 2%.

There were also large increases in the number of incidents that ambulances had to respond to (14%), and it took longer to get to hospital from the time 999 was called (by as much as 17 minutes in some areas).

This means that Keep Our NHS Public and other health campaigners are absolutely right to continue their campaigning on this vital issue despite the attempt to muddy the waters that this report represents.