Covering up for government mismanagement? No one volunteered for that

Volunteers have always fulfilled an essential role within our healthcare system. Ten years before the NHS began in 1938 the Royal Voluntary Service (RVS) was establishedas the Women’s Voluntary Services for Air Raid Precautions. Eighty years on around 5,000 volunteers provide support in hospitals such as helping with patient transport and providing ward trolley services. More modern roles for volunteers within our NHS have evolved into clinical transportation services in the National Association of Blood Bikers (NABB), helping people get to flu clinics, greeting patients at surgeries and assisting them to register or fill out paperwork. 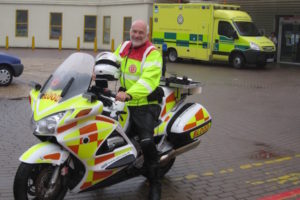 They also support patients recently discharged from hospital. In short volunteers are very well utilised in a range of complimentary services enriching and adding to, not detracting from, the very idea of a socialised healthcare system.

Taking our Volunteers for a ride

The contribution of NHS volunteers is highly valuable and their efforts are to be commended. However, with the latest announcement over recruiting unpaid laypeople to drive ambulances, it is surely time to ask; is this government taking volunteers, and our NHS for a ride?

Due to staff shortages and a concern over capacity this coming winter, East of England ambulance services trust are now considering using the military and volunteers to drive their vehicles. A senior paramedic employed by the trust was said to be “absolutely horrified” by the prospect;

“I have never heard anything like this in all my years. CFRs [Community First Responders] fulfil a very important role in their respective communities, but they should be there in their communities, not on frontline ambulances.”

It is a ridiculous state of affairs in the sixth largest economy in the world that the government have neglected the NHS to such an extent that hard pressed trusts are now resorting to unpaid labour in potentially life-threatening situations just to ensure essential services can operate. The trust maintain that volunteers will only be utilised in non-emergency situations such as supporting elderly people after a fall, but what happens if a patient’s condition suddenly deteriorates?

Even amongst professional paid staff it has long been asserted that the NHS runs much of the time on goodwill. The government in their pursuit of an agenda which underfunds and undervalues, have created a situation where unpaid overtime is sadly the norm with employees doing whatever it takes to care for patients and keep the system running. Many clinical tasks come under the heading of urgent and cannot be simply left until convenient. 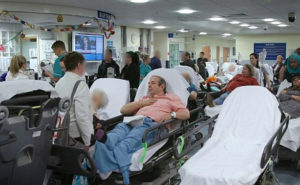 Increasingly a ‘perpetual winter’ is now being observed which necessitates increased demand on staffing resources and with 50,000 clinical vacancies the dangerous rota gaps mean teams must pull together to try and facilitate safe working conditions for both patients and staff.

Indeed, the last two winter crisis have in some instances seen charity The Red Cross more akin to assisting in warzones, employed in hospitals to support medical staff when capacity has been stretched to the limit. Seemingly this government will seek to exhaust every avenue rather than commit to proper funding and deploy resources into the appropriate areas.

Issues for the union

For some, volunteering can be a good springboard into an NHS career. Individuals can develop skills and a taste for patient care or medicine. Pressure is taken off staff for example when volunteers spend time talking to patients which is an important task and leaves medics more time for clinical duties. However, unpaid labour in inappropriate areas risks undermining professionals’ positions within the workplace.

CFR’s [Community First Responders] who it is now being proposed may assist paramedics in driving ambulances, receive just 5 days intensive training in life saving measures. As well as being potentially very dangerous, their utilisation sends the wrong message to staff that their years of training may be condensed and there is the potential if volunteering were to become widespread, for them to be undercut.

When volunteers are employed it is vital to ensure that the process is managed properly. In one hospital 400 volunteers were being managed by a single part-time staff member who had no contact with senior managers – and no effective safeguarding training.

There is a discrepancy as to just how many volunteers there are in the NHS. The Department of Health and Social Care (DHSC) estimates there are 3 million while a 2016 British Social Attitudes survey said there were about 1.7 million. If the government wish to inappropriately substitute staff members in some instances they must at least have a handle on their numbers and ascertain that proper safety measures are in place. The NHS does not currently retain a comprehensive plan on how to manage volunteers. Appointing and utilising resources on an ad hoc basis is not good enough, especially in a clinical environment when there are serious issues around confidentiality and safeguarding.

A report this year on volunteers in general practiceby David Buck, a fellow at the King’s Fund thinktank, found a “surprising lack of knowledge” about the role and contribution of volunteers in the NHS, despite a long history of volunteering. Buck says all the practices included in his report were clear about the need to manage and support volunteers. The report says;

“Volunteers are not a substitute or saviour for the NHS; they largely provide additional support, which is neither free nor infinite, and requires significant investment and support…”

Papering over the cracks

Employing volunteers inappropriately risks papering over the cracks in an underfunded system. Covering up for a lack of beds and a crisis in staff recruitment and retention also places the volunteer in a very unfair position and leaves them open to the risk of litigation which is potentially dangerous for the patient, emotionally damaging for the individual and costly for the NHS.

However skilled and or well-meaning volunteers are they cannot, nor should they, attempt to compensate for years of government mismanagement and underfunding. Adequate staffing, funding, and the reinstatement of 15,000 hospital beds is what is needed this winter to avert another crisis, not setting volunteers up to fail by asking them to become makeshift paramedics. It is not the role of charities or well-intentioned individuals to try and cover up for a system the government has run into the ground, no one should be volunteering for that.