Keep Our NHS Public's Jacky Davis, author of NHS for Sale: Myths, Lies and Deception finds that Channel 4's recent Dispatches programme, Lockdown Chaos is right - the Government's chaotic handling of the crisis has caused unnecessary deaths and lost the public's confidence in their ability to keep us safe.

South Korea has a population of 51 million. As of this week, it had had 29,000 cases of Covid and under 500 deaths. The UK has a population of 68 million, with 1.4 million cases and 52,000 deaths. These figures are truly shocking and show that it didn't have to be this way in the UK. The big question now is how did our government manage to spend so much money and end up with the highest death rate in Europe?

Channel 4’s Dispatches went some way to answering the question with their recent programme Lockdown Chaos: How the Government Lost Control. This looked at two particular aspects of what has gone wrong in the government’s response to the pandemic, both involving the all-important Test and Trace system.

Early on Boris Johnson emphasised the importance of Test and Trace and promised we would have a ‘world-beating’ system that would help us avoid another lockdown. It didn't really have to be world-beating, just good enough to trace 80% of contacts in order to contain the virus. After spending £12 billion we have ended up with a system that isn’t even reaching 50% of contacts and has had only 'a marginal impact' if any on controlling the spread. What went so badly wrong?

Dispatches showed how the government, instead of reaching out to tried and trusted local systems in public health and the NHS, turned straight to the private sector. Deloitte, the accountancy firm, were given millions (we don’t know the exact figures) to create and run Test and Trace. The work was of course then outsourced, and Dispatches went inside one of the mega labs involved, run by Randox near Belfast.

Randox process about a fifth of tests, many from care homes. Inside the lab were scenes of chaos, with employees describing faulty kits being dispatched, samples lost or thrown away, cross-contamination and leaking samples being thrown into open boxes. An NHS microbiologist commented ‘It's hard not to be speechless. We would be shut down if we performed that way’. The turn around time could be up to 7 days, which is far too long (75%of care home tests miss the government target of 48 hours). As the microbiologist commented - waiting more than 48 hours for a swab result means you're wasting your money. Employees also described a VIP system whereby firms who paid could have tests put through faster. Randox subsequently denied this and any other problems, despite the evidence on the screen. 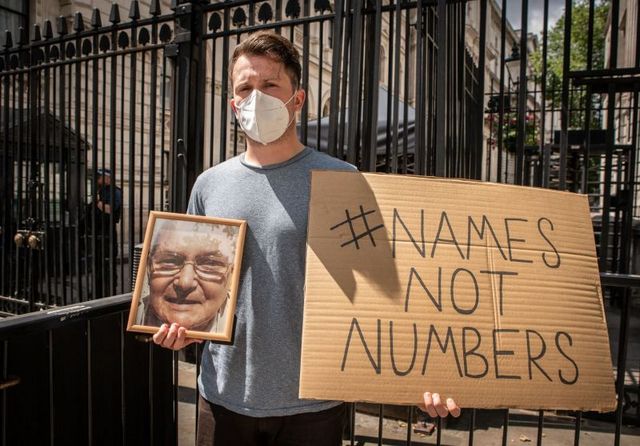 Dispatches then made some important connections between Randox and other players in Test and Trace. Matt Hancock, Secretary of State for Health, is the MP for Newmarket. He receives funding from the racing industry. Baroness Dido Harding, who was put in charge of Test and Trace for no apparent good reason, is a Conservative peer, married to a Conservative MP, and a key board member of the Jockey Club, which owns Newmarket. Their biggest event is the Grand National, sponsored by - you’ve guessed - Randox. Randox were paid £133 million to provide testing, followed by another £350 million. Randox pays Owen Paterson, ex-minister and Tory MP, £100,000 a year as a ‘consultant’. Randox says there is 'no connection’ between any of the above and this huge contract.  If you are concerned about the lack of transparency, the unaccountability and the chumocracy on display you can always complain to the government’s anti-corruption champion. Who - you’ve guessed - just happens to be Dido Harding's husband, MP John Penrose.

Meanwhile, Serco ‘a leading provider of public services’ whose name is associated with multiple failures in the NHS, was given a £410 million contract for mass contact tracing.  Redacted from the contract is how many actual contacts they needed to trace, and it appears that there is no remedy available for their abysmal failure to reach the targets.  Serco, of course, subcontracted the work to smaller companies, but have refused to name them. Investigation revealed that few if any had public health experience and their number included debt collection agencies. Serco has had a £25 million boost to profits thanks to the pandemic and a boost in their share price. As a passing note, health minister MP Edward Argar is a former head of Serco public affairs.

So where does this leave us? The Government has spent £12 billion of taxpayers' money on an 'NHS' Test and Trace which has little if anything to do with the NHS (apart from it getting the blame). That £12 billion could have gone to the NHS and public health labs, instead of which it has been frittered away on outsourcing a vital service to unaccountable firms who the DoH won’t even name. We don’t know how contracts were awarded, except that there was a secret fast track for companies connected to MPs and other Tory friends. In summary Test and Trace has failed miserably and the government has had to concede that it has lost control of the virus. And despite all this money, we have the highest death rate in Europe.

There will have to be a reckoning as to how this was allowed to happen, and the Dispatches expose is a good start. The Government mustn’t be allowed preside over such a public health disaster without being forced to examine what went wrong. Because what we know from South Korea and others is that it really didn't have to be like this.