It’s early days to see how a Biden victory will affect a UK-US trade deal. What we do know is that the corporate interests that shaped the US-UK trade deal under Trump will not magically disappear under Biden.

We should remember that the (thankfully failed) negotiations for the controversial Transatlantic Trade and Investment Partnership (TTIP) took place under the auspices of the Obama-Biden administration. And although a deal with the UK may take longer now (it’s thought to be a low priority for Biden), we can’t assume that the NHS will be any more protected than before. Here, some of the things we should still be concerned about...

US pharmaceutical companies have long complained about the buying power of the NHS and wanted to end our national price control system, arguing it prevented full market access for US drugs. They’ve lobbied for a trade deal that will weaken the role of the UK’s National Institute for Health and Care Excellence (NICE), the body that evaluates drugs and cost effectiveness. And trade negotiators have pushed for extended monopoly protections for new drugs that will keep prices high. Overall, a Trump deal was likely to increase profits for Big Pharma but massively increase the costs of drugs in the UK, possibly making the NHS unsustainable.

We know that Biden aims to create a new US body that appears similar to NICE, and he has promised to slash drug prices domestically.  However, Biden is said to have had a cosy relationship with Big Pharma for years, and drug company donations to his campaign were much larger than their donations to Trump’s. It’s not yet clear what this relationship means for a trade deal with the UK.

US corporations already have access to the NHS ‘market’ and a US-UK agreement could lock in this access in a way that future UK governments would be unable to reverse. Although the UK government has claimed that it, and not its trading partners, will make the decisions about public services, this claim is misleading. Government decisions can be undermined if a treaty includes an investment protection measure, such as Investor-State Dispute Settlement (ISDS), allowing foreign corporations to challenge state actions that affect their profits.

Under Trump, trade negotiators were highly critical of measures like ISDS, believing these threatened the ‘Buy America’ policy and encouraged US companies to set up in other countries. However, the deal between the US, Mexico and Canada (USMCA) negotiated under Trump included a weakened version of ISDS. It wasn’t clear if a UK-US deal would have included a version of ISDS or not.

Biden was ‘pro ISDS’ during the Obama administration but his recent statements are more ambiguous. He says for example “I oppose the ability of private corporations to attach labour, health and environmental policies through the Investor-State Dispute Settlement process and I oppose the inclusion of such provisions in future trade agreements”. This doesn’t rule out ISDS being included in other chapters of a trade deal. 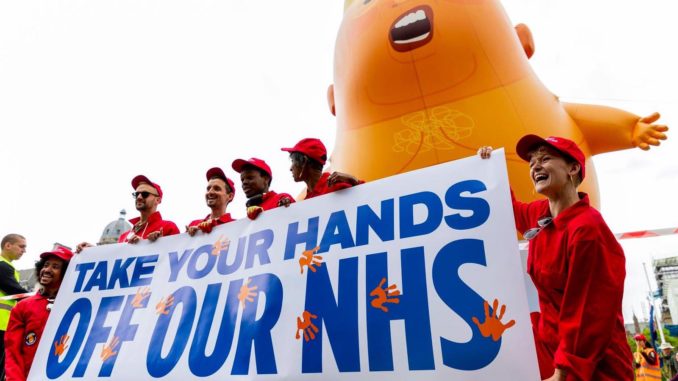 Trade deals these days are largely about giving multinational corporations more scope for profit by reducing regulations and standards. In the US, the regulatory system is based on a ‘science-based’ approach that allows business to develop and sell products until they prove harmful. This contrasts with the precautionary principle used (up until now) by the UK, requiring businesses to show that a new product is safe before it can be sold. There is nothing to suggest that the Biden administration will change the US system determining safety, which leaves a significant gap between what is acceptable in the US and the UK.

During the Trump era, US negotiators tried to get the UK to make its regulations (for example on genetically modified crops, pesticides and hormone treated meat) compatible with those of the US.  The most famous example has been chlorine-washed chicken. Biden is known to want greater environmental protections in trade deals but his views are not always consistent. His home state is Delaware – also home to the largest chicken producers in the US  - and apparently he has told Nick Clegg (of all people) “We are not going to sign anything that the chicken farmers of Delaware don’t like!"

The trading of digital data

Our government’s attempts to assure us that the NHS is ‘not for sale’ say nothing about the sale of our NHS data. During the Trump era, Big Tech has pushed the US for trade deals that ensure the free flow of data. This could allow NHS data to be moved to servers in the US and mined for new diagnostic tools. These could then be created and copyrighted by Silicon Valley (and potentially sold back to the NHS at our expense). Big Tech’s insistence on the free movement of data also threatens our rights to safe storage and privacy of data generally, and health data in particular (estimated to be worth £10bn).

The Biden administration’s agenda does not appear to include regulation of the big technology companies. Some say there are signs he is trying to distance himself from the close relationship that Obama developed with Silicone Valley. However, Big Tech companies were among Biden’s biggest campaign donors, and a number of Silicone Valley insiders joined his campaign team.

Biden’s victory is a huge relief to many, not least because, unlike his predecessor, he believes in climate change and the need to take action on Covid 19. Perhaps understandably, a trade deal with the UK is not his priority, and may not happen if the UK breaks international law and puts the Good Friday Agreement at risk.

That does not mean we can afford to take our eye off the ball – particularly because whether a deal is struck under Trump or Biden, the risk is that it will be strongly influenced by increasingly powerful multinational corporations. These are interested less in the small fry of free trade gains and more in dismantling our high regulatory standards, gaining further access to our potentially lucrative public services, and undermining our parliamentary democracy.