A psychologist working in the community speaks out on the mental health crisis.

My colleague and I share a joke about patient cancellations which sums up our predicament; we are only able to complete our work if people don’t show up for appointments. I had a DNA (did not attend) this afternoon which meant for the first time today I was able to use the bathroom, eat a croissant and make a superficial dent in my insurmountable admin. Our days aren’t always like this, but Psychological Services in the NHS are currently inundated even though our threshold has been raised (which means the severity of cases we accept has increased). Should the current political situation be allowed to continue, it is fair to say things will get worse.

The drive to privatise the NHS, married with the impact of a decade of austerity, has been devastating. Cuts have meant fewer services, fewer staff, less one to one time with patients, less resources, and a situation in which almost all creative services have been reduced.

I work in one of London’s largest boroughs and am one of only two permanent CAMHS (child and adolescent mental health services) specialists on my team, and the conditions of work are not sustainable. 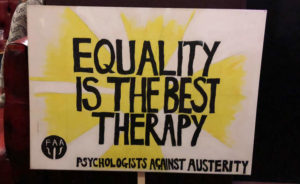 We have to work extra hours if we are to practice safely; we take on more cases than required, because if we don’t, nobody will take them. Waiting list time is increasing. Raised thresholds mean we are now unable to take self-referrals from young people who are letting us know they cannot manage without professional help.

Psychological services within the NHS have become standardised and adult mental health provisions are becoming more clinical and less accessible. There has been a huge reduction in art therapists for example, an essential point of access for many who find talking therapy difficult, particularly in forensic services where there often is just no language for the trauma or distress experienced.

But most of all, the services are less and less able to tackle social problems. Even the politically minded psych professionals are finding less time to push for housing, dealing with domestic violence, working alongside schools, education for parents and teachers, and so on.

Austerity has had a multi-level impact on mental health, generating a dangerous, downward spiral. It has led to savage cuts in services, but it has also rapidly spread the conditions that create mental health problems in the first place. Austerity for example reduces the instances of free school meals, and better resourced healthcare, while increasing the need for them. Children not being fed adequately results in poor concentration and attention deficit – something that all too quickly becomes attributed to neurological difficulty; resulting in medication to assuage apparent symptoms.

A significant rise in mental health difficulties have been reported since 2009-2013, with the increase being greatest amongst those with low levels of education and income. Austerity can be tracked alongside it and is the clear motor for these dangerous trends. Public sector care workers too, often low paid themselves are in dire straits. People who once loved to work in schools and hospitals, in the voluntary and charity sector, are themselves falling ill.

A briefing paper ‘The psychological impact of austerity’ (Griffin, McGrath, and Mundy, 2019) looking at the psychological effects of austerity captures some of the ways in which millions of people’s lives have been transformed over the last ten years:

The result of all this is that deliberate self-harm is on the increase and suicidal thoughts are approaching the point of an epidemic, particularly in young people. There has been a sharp rise in anti-depressant prescriptions, and GPs are reporting rising numbers of mental health appointments.

These problems are commonly put down to higher instances of internet use; cyber bullying, social media, or media in general encouraging unhealthy beauty standards, body dysmorphia, and feelings of general inadequacy. But in my day to day work, I rarely encounter people struggling due to their social media developed neurosis.

What is apparent, on the contrary, is the isolation people appear to experience, is due to the lack of connectedness and compassion they experience in the society we live in. They have lost touch with themselves and have lost touch with others. We are gently prompted to disconnect from those around us. Be it the voices on the underground telling us to donate spare change to their suggested charity rather than to the human being we meet on the train, or the park benches that have been fitted with spikes. It is being wrongly insisted that we simply cannot afford to support those in need, be it the sick laying on hospital floors or the destitute dropping dead in job centres. The more money we take out of public services, the more disparity we create.

Working outside hospital wards in the community, it becomes crystal clear that mental health issues can only be addressed by increased attention to the individual and simultaneous consideration of their relationships with others and their place in society. Problems have to be dealt with in the therapy room and within the community. The breakdown of community services, such as youth centres, women’s refuges, libraries, community centres and so on, have forced people out of their communities, and into their homes, or indeed onto the streets. 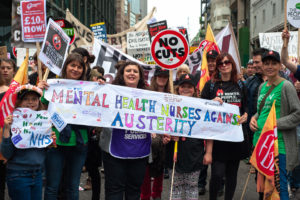 For an NHS worker such as myself the choice between political parties is clear. And we cannot allow for another 5 years of Tory Government will be devastating. As I grew up, a first-generation Londoner, I took the NHS for granted. Only in more recent years, seeing the ground crack beneath my feet, did I begin to realise how sensible nationalised healthcare is.

As the fog of adolescence lifted, I remember a growing ambition to work in the NHS, one that still remains. I’m glad that I am not the only one who feels a deep sense of responsibility, and a sense of purpose through working for an institution that strives to help the vulnerable, no matter their class, creed, or affliction.

We are facing a very real crisis but we are also in a time of hope, a time where people are driven to create real change, and to address the devastation caused by ten years of austerity. The road to recovery involves political engagement, investment, and a commitment to regenerate collective institutions at every level.

This general election provides a unique opportunity for transformation. The NHS has rightly become the central battleground as it faces a very real danger of collapse, a reality that has been drowned out by slogans such as ‘get Brexit done!’

On December 12th, exercise your right to make your voice heard and, don't vote Conservative, #VoteNHS