Michael Walsh, a shoulder surgeon, has been sacked by Spire Healthcare and accused of subjecting scores of patients to unnecessary operations that left many in pain, traumatised and unable to work. This is a depressingly familiar story, with echoes of the case of Ian Paterson, the rogue breast surgeon who also worked for Spire.

Paterson subjected more than 1,000 patients to unnecessary and damaging operations over 14 years in both private and NHS hospitals. He is serving a 20-year jail sentence imposed in 2017 for wounding with intent and unlawfully wounding nine women and one man whom he treated between 1997 and 2011.

Walsh is the latest PR disaster for Spire and has exposed it to accusations of “systemic” shortcomings in its 39 private UK hospitals with 7,000 doctors and surgeons on their books. Most of Walsh’s patients were in the private sector with fees paid by insurers or out of their own pocket, but others were NHS patients under the ‘choose and book’ scheme which diverts patients to the ‘independent’ sector for speedier operations. Given pressure on the NHS and delay or cancellation of surgery, such diversions are becoming ever more common. While the NHS Long Term Plan promotes a consumer choice agenda, it is unlikely that patients of Paterson and Walsh would agree this leads to improved patient care as claimed:

The ability of patients to choose where they have their treatment remains a powerful tool for delivering improved waiting times and patient experiences of care. The NHS will continue to provide patients with a wide choice of options for quick elective care, including making use of available independent sector capacity . . . Patients will continue to have choice at point of referral and anyone who has been waiting for six months will be reviewed and given the option of faster treatment at an alternative provider, with money following the patient to fund their care.

The recent Paterson inquiry, lead by Bishop Graham James, should have been an opportunity to highlight failings in the private sector that consistently put patients at risk. There was however an obvious omission  - a failure to tackle the hugely problematic nature of the relationship between the private sector and the NHS. This includes the sharing of consultants, the need to make profit, and the inevitable conflicts of interest that these create. As pointed out by David Rowlands (director of the Centre for Health in the Public Interest), investors in UK private hospitals must have breathed a huge sigh of relief on reading the bishop’s recommendations:

At stake for the investors was the possibility that the Right Reverend Graham James would deem their business model so incompatible with the safety of patients that it would require fundamental reform. Yet rather than tackle the private hospital industry head-on, the bishop put forward a series of low-impact recommendations which will do nothing to prevent another Paterson, but instead leaves intact the archaic and dangerous form of medical practice that abetted him.

And lo and behold, we now have Walsh to demonstrate the prescience of this observation.

The independent sector is lavish with payments aimed at bringing in consultant work. Just seven private hospital firms paid about £1.5 million in gifts and hospitality to consultants who referred patients to them in 2017/18. Rowlands points out that consultants, by bringing in patients, are the main source of income to a private hospital and sometimes each worth millions of pounds. There is not only a financial disincentive to challenge their practises (killing the golden goose), but more operations mean more money, and since consultants are not employees of the private hospital it can deny responsibility when things go wrong. This is even more worrying when an increasing volume of NHS work is being sent to the private sector (including one third of hip operations) under the NHSE banner of “improved patient experiences of care”.

By November 2019, over a ten year period the number of NHS patients having surgery in private hospitals nearly trebled:

It should now be obvious that the care model in private hospitals can have long term and even tragic consequences for NHS patients, such as Peter O’Donnell who tragically died after hip replacement. The Department of Health and Social Care should also come clean, and rather than disguising it on their balance sheets as NHS spending, accept that the cost of all these operations constitutes a form of privatisation. Rowlands demands logically that:

An analysis of Care Quality Commission reports, from private providers has identified a plethora of risks including consultant surgeons without indemnity insurance; clinical outcomes not being monitored by the hospital, and not all clinical incidents being properly reported; assessments of patients prior to surgery (important for excluding high risk patients since most private hospitals do not have intensive care facilities or back-up specialist teams) either weak or not being followed.

It is time for the independent sector (independent of usual NHS obligations and responsibilities to patients and monitoring bodies?) to focus on patient care rather than profit, and for its parasitic relationship with the NHS to be brought to an end. The government must realise that ‘patient choice’ has its limitations, and commit to proper investment in our public health services so that there is no need for patients to take the risk of going elsewhere. 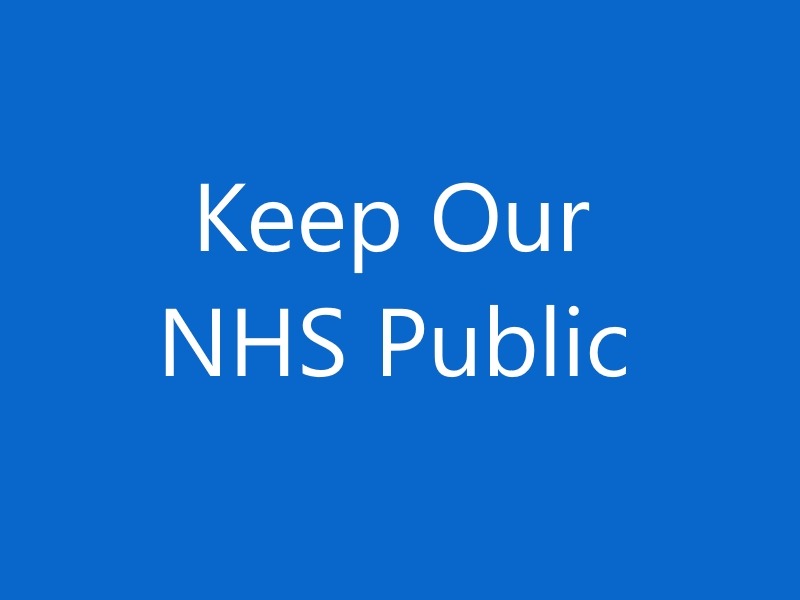