NHS staff, many of whom are worn out and overworked, deserve a substantial pay rise. Their pay has fallen in value by 10-15% - for some, even worse than that. They see sleaze, corrupt lobbying, privatisation and a government that has deliberately undermined the NHS. It is time to take a stand. This NHS anniversary in July, NHS Campaigners will be joining forces with NHS workers in demanding an end to privatisation and cuts, and pay justice now.

Keep Our NHS Public (KONP) stands firmly together with health and care workers demanding a substantial pay rise in recognition not only of pay erosion over the last decade but also their amazing efforts and dedication during the pandemic. At the end of March, Health Campaigns Together (HCT) and KONP issued a joint statement calling for a campaign for better pay for all NHS staff following the government’s announcement that it can only ‘afford’ a 1% increase.

Contrast this with the 22% increase in MP’s salaries since 2010! NHS staff who have been left reeling from the impact of the year-long pandemic are equally furious and bewildered. This time last year, Johnson was standing on the steps of Downing Street applauding the NHS every week until he caught coronavirus.  His life was saved by these same staff and he emerged from Intensive Care pledging to honour and support the NHS. Chancellor Sunak promised to provide ‘whatever it needs’ for the NHS to tackle the pandemic.

Broken promises and life on the frontline

What a difference a year makes! Staff morale is at a low ebb, with many reporting feelings of exhaustion, mental health difficulties and some being ‘broken’ by their individual traumas. The HCT affiliates meeting on March 27th was addressed by Holly Johnstone, an oncology nurse from Sheffield, and member of ‘NHS Workers Say No’ and GMB union, who summed up the current mood and fears amongst NHS staff:

This year has been like no other, staff are exhausted and demoralised, yet they have stepped up and taken risks but they really are at breaking point. ... We know that almost 1000 health and care workers have died and over 1 in 10 survivors go on to develop complications of long covid, the impact on an already depleted workforce will be massive. … We have a back log of waiting lists to work through, delays in emergency care, ambulances queuing to get into hospitals, and we're simply working in an already overwhelmed NHS under a government that doesn't prioritise the safety of its workers or patients.

The pandemic has compounded pre-existing problems of staff feeling undervalued, horrendous working conditions, people not having breaks, staying way beyond their shifts to keep wards safe, job roles and responsibilities have increased dramatically and this was happening before the pandemic. … We take on the extra responsibility and we do it well, but this is simply not reflected in our pay and the extra responsibilities we take on are to plug the gaps in the shortages from doctors, nurses and others.

Austerity has caused a real loss in income

While Government claims that nurses have seen their pay rise, in the last decade wages in the NHS grew at much less than inflation, meaning that by 2020 the real buying power of staff had fallen by 10-15%. This is in stark contrast to wages in the private sector where buying power remained much the same. Since the year ending August 2010, when the NHS started publishing these statistics, average nurse pay has fallen by 7.4% in real terms. However, this average conceals differences between various grades with a newly qualified staff nurse (Band 5) estimated to have experienced an 11% real-terms pay cut, while the most experienced staff nurse saw a cut of 17%. Senior ward staff or specialist nurses at Band 6 were hit the worst with a massive real-terms loss of 32%.

NHS England Chief Executive Simon Stevens pointed out that ministers had already planned a 2.1% pay rise from 1st April 2021 under Theresa May’s five-year funding deal. The NHS Confederation, speaking on behalf of organisations that plan, commission and provide NHS services, emphasised that valuing and recognising the contributions and sacrifices made by NHS staff over the last year will be crucial to retaining staff, let alone filling the 90,000 current vacancies. The 1% pay offer risked demoralising workers and harming efforts to retain staff, making it very unlikely that the key manifesto target of recruiting an extra 50,000 nurses could be met.

Polling undertaken by Savanta ComRes for 38 Degrees found that 53% of the public think NHS nurses should get at least a 5% pay rise and that 83% – including 78% of Tory voters – think the 1% is too little for NHS staff overall. A recent survey of 800 senior NHS managers found 9/10 thought a significant pay rise for staff was essential to avert an exodus of key personnel. Some decried the 1% offer as an “insult” and “making them feel worthless”. One described how NHS staff had been treated like cannon fodder.

A representative poll of 1,006 health professionals across the UK by YouGov for the IPPR think tank found that the pandemic has left one in four more likely to leave than a year ago. That includes 29% of nurses and midwives, occupations in which the NHS has major shortages. A quarter of NHS workers are more likely to quit their job than a year ago because they are unhappy about their pay, frustrated by understaffing and exhausted by Covid-19. 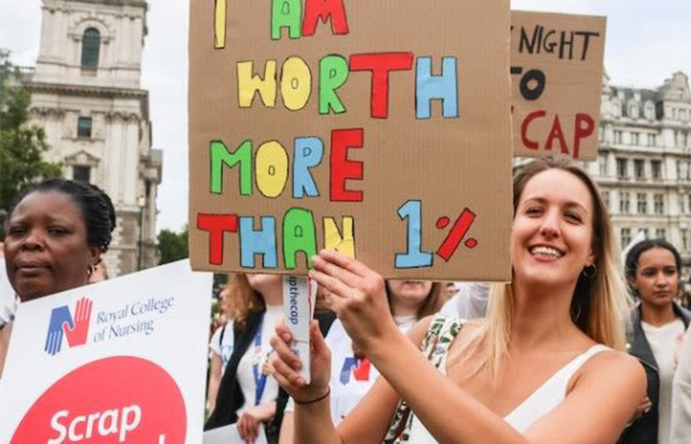 Money for the few, not the many

Health minister, Lord Bethell, has defended the proposed 1% ‘pay rise’, explaining that "nurses are well-paid for the job" and that they had secure jobs many people would "envy". He also showed his lack of empathy for beleaguered staff when he refuted Simon Stevens’ suggestion that this was in fact a pay cut, by adding: "There are millions of people out of work out of the back of this pandemic”. Lord Bethell relies on unpaid advisors, including Lord Feldman (former Conservative Party Chair) who also happens to have run a lobbying firm. One of the clients he lobbied for was Bunzl Healthcare, awarded a £22.6m contract without competition for supply of Personal Protective Equipment, just one of the contracts the government unlawfully failed to disclose. Cutting workers’ pay while handing out large sums of money to supporters and cronies  is clearly seen as perfectly fair by a government that is becoming so mired in sleaze that even leading Tories are expressing alarm.

Having shrugged off the court ruling that he acted unlawfully in not publishing contracts, Hancock is now embroiled in further controversy about his standards of behaviour in public office.  He was lobbied by David Cameron  on behalf of a now collapsed company run by the scandal-hit financier Lex Greensill, and invited for a private drink and a chat. This related to  an app called Earnd that would enable 1.4m NHS staff in England to be paid daily by Greensill. More ignominy followed when the Health Service Journal exposed how Hancock failed to declare his interest in the company Topwood for more than two months and had never previously declared his family’s longstanding involvement with it despite the awards of NHS contracts.

Further revelations included that Lord Prior, chair of NHS England, a former Tory health minister and Tory party deputy chair, helped facilitate a meeting at which Lex Greensill was also able to lobby Tory peer Dido Harding, chair of NHS Improvement and head of ‘test and trace’. According to reports, Prior had previously arranged for Greensill to meet NHS England’s chief financial officer and Sir Simon Stevens. Caroline Molloy writing about the background to Greensill and the NHS, describes the discussions around Earnd as:

… emblematic of the digital transformation of the NHS

with much wider significance than being just a mundane way of impoverished staff getting faster access to pay:

… the use of apps – both patient-facing and internal – has been a key bridgehead to cementing NHS privatisation and shovelling valuable data into the hands of the private sector in a plethora of ways, and looks set to remain so under the rubric of ‘digital transformation’.

Serco is one of the companies that has benefitted from a £37bn contract to undertake ‘test and trace’ (junior health minister Edward Argar is a former Serco lobbyist). The cross-party parliamentary public accounts committee recently reported it could find no evidence that ‘test and trace’ had led to a reduction in coranavirus cases! The committee sought justification for the:

and criticised the use of private consultants who are paid up to £6,624 a day. The chief executive of the Royal College of Nursing speaking for many pithily observed:

Far from being embarrassed, Serco chief executive Rupert Soames, whose brother is former Conservative MP Nicholas Soames, staunchly defended his company’s role, saying the test and trace team had done “bloody well”. Perhaps he was referring to generous rewards reaped by Serco from public funds, with Soames’s pay for 2020 being a cool  £4.9 million. Shareholders also enjoyed a £17m dividend payout after company profits doubled with revenue boosted by pandemic contracts

The Pay Review Body may make its recommendation on pay towards the end of May but possibly not until early June. The unions are preparing to reject any offer which does not reflect their demand for a ‘substantial’ pay rise.  They are hoping to coordinate efforts, even as far as indicative ballots for strike action.  This will be an important step for both HCT and KONP.

So far it is clear that the government is extremely vulnerable on this issue and has executed many U-turns in the last year when put under pressure, and there is huge public support for the staff and the NHS which can be mobilised around pay. We are calling on all local groups to make contact with NHS staff and their unions at local level.  With HCT, we are proposing that all local groups look to mobilise coordinated action over the weekend of 3-4th July 2021, the nearest weekend to the 73rd NHS July 5th anniversary.  We aim for scores of events that weekend (pandemic conditions permitting) and will be producing stickers, posters and flyers.  The Facebook Group, NHS Workers Say NO to Public Pay Sector Pay Inequality also have stickers, badges and posters which local groups can access.

KONP and HCT will work with all the health unions to ensure we continue to offer the widest possible assistance - please start making your plans now (the summer is coming round fast!).  We can make a big difference to the morale and confidence of NHS Staff by helping mobilise public support.  This is a struggle we can and must win, please show your solidarity and start the work now.