We have no confidence in this government. Its handling of the pandemic has been a disaster from the very beginning and ministers have shown themselves unwilling or incapable of learning from mistakes. If they had developed an effective strategy, the population would not be facing this crackdown with what is terrible news for many families. More importantly, we would not have lost tens of thousands of lives, and the NHS and its staff would not have been pushed to the brink. It is time for a change. 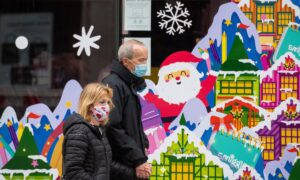 Keep Our NHS Public (KONP) has been critical of the government response to the COVID-19 pandemic from the very start, beginning with the reluctance to lockdown in March, the false reassurances (“we can send the virus packing”; “it will all be over in 12 weeks”; “it will be over by Christmas”), the doomed App, the catastrophic failure of a privatised test and trace system to control the virus, and the cronyism and corruption, throwing billions of pounds at private contractors with no experience except links to the Conservative party. All these things, together with rejection of advice from its own scientific advisors, have led to the UK having more deaths among its population on a pro rata basis than even the USA.

The defence that ‘everyone was caught on the hop by a new virus’ is invalidated by the experience of countries such as Vietnam, New Zealand and South Korea which pursued a ‘zero covid’ strategy and have all had death rates that are far lower than ours. In addition, the government was aware of unpreparedness for a major pandemic despite this being number one on its risk register for years. Conflating SARS-CoV-2 with influenza and a mistaken belief in ‘British exceptionalism’ has proved to be disastrous, with over 67,000 deaths (directly attributable to COVID-19 infection within 28 days), and the numbers continuing to rise.

The approach taken to pandemic management can be characterised as one of indecision, delay, incompetence and belated U-turns, while still claiming to be world-beating (sadly, accurate only in relation to mortality). Broader consequences include: huge pressure on NHS and social care staff as well as other key workers such as teachers, chaos in schools, the further destruction of public health bodies, marginalisation and undermining of General Practitioners, devastation in care homes, shutting down of many non-Covid NHS services and use of the crisis as cover to drive forward further organisational reform of health care while boosting the private sector.

Telling people what they want, not what they need

The government Scientific Advisory Group on Emergencies (SAGE) recommended a number of restrictions be implemented for a two-week period from late September given the rising numbers of new infections. This advice was ignored until cases had risen so much that, three weeks later, it was forced to respond and introduced the hugely unpopular ‘tiered system’. In the meantime, the threat level to the NHS increased considerably with exhausted staff now coping with what had clearly become a second wave. Ultimately this also led in many areas to cancellation for a second time of non-covid NHS work with devastating effects on many patients such as those with cancer, or awaiting elective surgery.

Despite the most marked increase in infection being found in secondary schools, the government overruled local authorities and insisted these stayed open. This is despite huge problems with attempting to make schools Covid-secure, teachers being off sick, children needing to isolate, and environmental issues such as how to maintain effective ventilation and acceptable environmental temperature at the same time. Meanwhile, the prospect of an effective vaccine was being used to convey the mistaken message that ‘it was nearly over’ and we would all be able to enjoy a family Christmas.

Tiers of failure, anger and frustration

The situation in mid-December demonstrated that none of the three tiers of restrictions were effective in reducing the number of infections. There were 35,000 new cases in one day across the UK, with the count rising in all nations and in almost all local authorities, but most rapidly in London, southeast and east England.

Hospitalisations with Covid had been increasing over the previous two weeks in all parts of the country, with a total of around 16,000 inpatients and a clear expectation that this number would soon exceed the peak experienced in the first phase of the pandemic in the spring. Deaths had increased to 400 a day. Knowing that viral spread occurs most easily when people are inside and crowded together in poorly ventilated rooms, modellers predicted that allowing families to mix at Christmas could lead to a doubling of the number of infections, with the reproduction rate (R) increasing to as high as 2.8 - 3.5, spelling disaster for the NHS.

Don’t give Covid to your friends and family for Christmas

Mindful perhaps of newspaper cartoons showing the prime minister as the ‘Grinch who stole Christmas’ or as Ebenezer Scrooge, the government insisted in effect that thousands of more deaths was a price worth paying for allowing families to travel long distances and meet up inside as bubbles of three for up to five days. This provoked a strong and hostile reaction from both scientists and the medical profession who pointed out the folly of such a plan. The SAGE and Independent SAGE issued guidance on how to stay safe over the holiday period, emphasising the importance of not meeting indoors. However, having long lost all interest in ‘following the science’, Johnson stuck to his guns in allowing restrictions to be relaxed over Christmas, shamefully ridiculing those who criticised him. 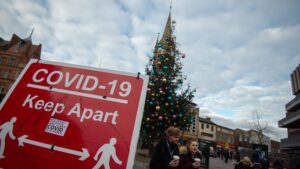 This cannot be regarded as a rational response to the massive increase in infection rate across the country (with skyrocketing numbers in London), it is in fact nothing less than a total abdication of responsibility for protecting the health and safety of the people. For this reason, on 16 December KONP launched a petition with Change.org calling for the mixing rules at Christmas not to be relaxed, highlighting the still urgent need for a test and trace system fit for purpose, and the necessity of placing testing and tracing in the hands of local public health teams. This must be coupled with giving comprehensive financial support for those in quarantine, with accommodation if necessary so that isolation is feasible for those on low pay or in crowded homes.

The pandemic is far from over, vaccination is a huge and time-consuming logistical challenge and the safety and effectiveness of vaccination over a long period are as yet unknown.

Predictably, a new coronavirus mutation has now been used as the pretext for backtracking once again on policy. Just days after reaffirming the festive “bubble” plan and claiming it would be “inhuman” to cancel Christmas, the prime minister announced on the 19th December the creation of a new, stricter “tier 4” for London and much of the south east and east. People here will be expected to stay at home, with restrictions being similar to those during the four-week lockdown. Families outside tier 4 are now only allowed to mix for one day over Christmas, and travel is discouraged.

The rapid spread of the virus demanded decisive action long before scientists identified the appearance of a new strain. We didn’t need to know there was a new mutation to act, the figures already spoke for themselves.

The government’s strategy was obviously failing. Johnson delayed until the last minute, hiding behind the convenient new science and the parliamentary recess. This must be the final straw. We believe that there can no longer be any excuses for this government and its deadly litany of failures. Boris Johnson and the current conservative government have proved themselves morally, ideologically and professionally incapable of keeping the people of this country safe. It’s time we held them to account - it’s time they took responsibility. Ministers must resign and the current strategy, which seemingly prioritises profit over people, must be rejected once and for all.