As 2020 comes to an end, we would like to thank all of our supporters for everything they have done for us during this challenging year.

This time last year we were still healing from a General Election result, that despite our hard campaigning, saw the NHS left more vulnerable than ever. We were afraid for its future, but nothing could have prepared us for the events that started to unfold at the beginning of this year.

The Coronavirus pandemic has shaped our focus, and the way we work and campaign, but we have never deviated from our goal to keep the NHS in public hands, for public benefit.

We would like to share some of the ways we have worked to defend the NHS from a range of threats this year:

We started off the year by supporting security guards who were striking to have equal employment conditions to university staff at St George's University Medical School. The strikes hit headlines as police behaved illegally at them.

For Valentines Day weekend, Keep Our NHS Public groups were out in force across the country holding events for our National Winter Crisis Day of Action. Aimed at telling the public the real story behind the Government spin, over 20 actions took place, including a banner being dropped off Westminster Bridge highlighting the 5,449 patients who had died waiting on hospital trolleys that winter. 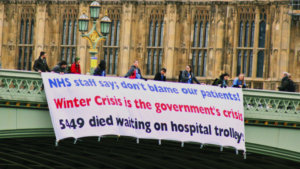 This was the month that it all kicked off. Globally. We called for a national lockdown to control the Covid-19 outbreak in the UK long before the Government implemented one. We also launched our '6 demands' petition, laying out the resources necessary for NHS staff to continue to provide services during the pandemic, including PPE and adequate sick pay. We received over 250,000 signatures, so thank you very much if you signed that.

As the seriousness of the impact of the Covid-19 pandemic became apparent, we decided it was important for us to keep a record of the health and social care workers who had died from Covid-19 this year.

We held a series of online meetings for people who still wanted to learn more and ask questions about the NHS and the pandemic, but were unable to do so due to national lockdown rules. One of these meetings Coronavirus Crisis: What now for the NHS is available to view on YouTube (along with others from this year).

Keep Our NHS Public launched its post-Covid NHS Rescue plan, that outlined how we can 'build back better' by protecting the NHS.

Keep Our NHS Public groups across the UK sang Happy Birthday to the NHS, while also marking the lives lost during the Covid-19 pandemic. 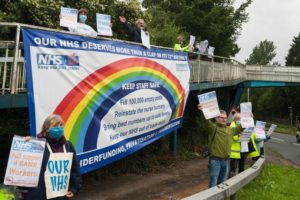 We were back out on the streets for the first time since lockdown for both. Our vigil to mark the lives lost by the public, and also the health and social care workers who had died saw 60 NHS staff and activists carry lanterns representing our lost loved ones to Downing Street. There, over 300 names of health and social care workers who lost their lives to Covid-19 were read out. 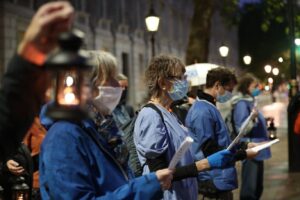 We supported the new grassroots group NHS Workers Say No to Public Sector Pay Inequality to demand a 15% pay rise for nurses who were left out of pay rises announced for public sector workers.  Organiser Ness Woodcock-Dennis RN told Keep Our NHS Public supporters why it was so important to march with them this summer.

Protect Our NHS Bristol dumped a pile of manure outside Serco HQ, in protest at its appalling handling of test, track and trace during the Covid-19 pandemic. The organisation received billions to run the service, but failures from the company have continued. 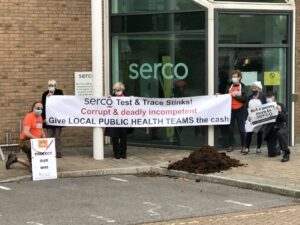 Our second hugely successful petition of the year launched this month as we called for test, track and trace to be restored to public hands.

As Covid-19 cases started to rise again it became clear that outsourcing the test and trace system had failed, and that this failure had cost lives. This issue still isn't resolved, so thank you to the nearly 200,000 of you who signed our petition, and if you haven't, please go ahead and do so.

A day of action to protect the NHS from trade deals saw Trumpkins and banner drops across the UK. 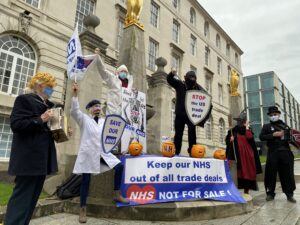 A second lockdown saw our meetings and campaigning return online, angrier and more focused than ever. Keep Our NHS Public Lambeth held a successful meeting on Fixing Test and Trace.

We won! This month isn't even over yet and yet we have already welcomed two significant campaigning successes. Firstly we saw the House of Lords vote to protect the NHS from trade deals, following months (and years!) of campaigning from Keep Our NHS Public. i newspaper also featured our petition to change Christmas mixing advice to avoid further Covid-19 deaths, on the day the Government were forced to announce a u-turn.

It's good to end the year on a high note, and prove that we are capable of acheiving our aims, even in the hardest of times.

Please donate to Keep Our NHS Public to ensure 2021 is our best year ever.